Since the passing of Stephen Sondheim last November, tributes to the life and legacy of the legendary Broadway composer and lyricist have continued with unabated love, respect, and admiration. Among the latest are a new book, an album, and an upcoming evening of cabaret concerts by theater writers inspired by his iconic work. 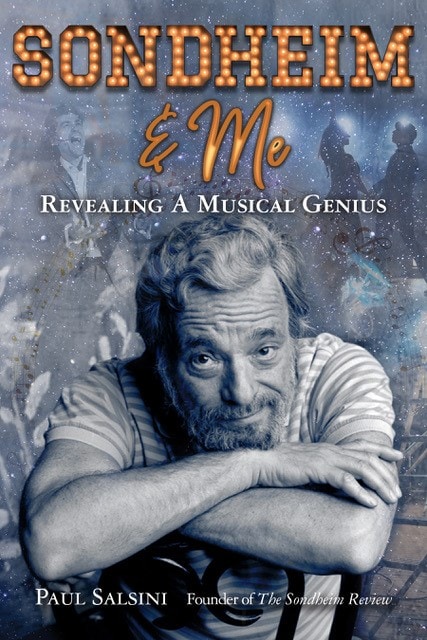 In his forthcoming memoir Sondheim & Me: Revealing a Musical Genius, author and journalist Paul Salsini chronicles their long-distance relationship and interactions before and during his years as founder and editor of The Sondheim Review – based in Milwaukee, begun in 1994, and the only publication dedicated exclusively to Sondheim and his work in his lifetime – sharing his personal experiences of conducting interviews, corresponding, and speaking on the phone with the eight-time Tony Award winner through the entire next decade of the quarterly magazine (which Salsini left in 2004, and ceased publication in 2016).

Written in a direct, engaging, and enjoyable style, the book includes excerpts from the periodical, including critical reviews of Sondheim’s musicals, letters they exchanged, “emendations” he offered, conversations they had, and appearances he made, all of which reveal special insights into the artist’s creative process, personal thoughts and opinions on his canon and how his shows were received, his generosity in sharing material, and his passion for innovative musical theater.

Salsini also discusses how he was first introduced to Sondheim’s work, the trips he took to NYC and around the country to see productions, festivals, and celebrations of his shows, and details about such renowned musicals as Passion, Company, Follies, Assassins, Sweeney Todd, Into the Woods, A Little Night Music, and Gypsy, as well as his lesser-known shows and songs, and ones that Sondheim wrote when he was still a student. The indispensable volume concludes with a useful year-by-year chronology of Sondheim’s long and productive life.

On September 16, Ghostlight Records released NYC-based actor, singer, and musician Eleri Ward’s new album Keep A Tender Distance – an introspective indie folk exploration of Sondheim’s musical theater canon – in digital and streaming formats, with a physical CD release planned for later this year. The new collection, produced by Allen Tate and Ward, and arranged by Ward, with string arrangements by Ellis Ludwig-Leone, is the follow-up to A Perfect Little Death, Ward’s hit debut take on the Sondheim catalogue, which went viral and resulted in several sold-out live concerts at Joe’s Pub, and is currently available on vinyl, CD, and streaming platforms.

Eleri – fresh off a national summer tour opening for Josh Groban with the Preservation Hall Jazz Band, and beginning previews in MCC Theater’s Off-Broadway production of Only Gold (created by Kate Nash, Andy Blankenbuehler, and Ted Malawer) on October 5 – has built on the previous Sondheim album in her signature style of expressive vocals and haunting guitar arrangements, while expanding the instrumentation and deepening her emotional interpretations of such Broadway standards as “Stay with Me,” “Agony,” “I Know Things Now,” and “No One Is Alone” from Into the Woods; “Another Hundred People” and “Marry Me a Little” from Company; the title song and “Not a Day Goes By” from Merrily We Roll Along; “Move On” from Sunday in the Park with George; “The Miller’s Son” from A Little Night Music; and “Unworthy of Your Love” from Assassins.

She noted that “I went into recording this album with a lot of open space, not wanting to confine myself into any set arrangement, and that allowed for these collaborations to really bring everything to the next level . . . There are string arrangements on six of the tracks, which is a whole new world for me, and I also have a mix of electric guitar, keyboard, and banjo added to this album.”

Not only was Stephen Sondheim a highly acclaimed and beloved cornerstone of the Broadway community, he was also a generous teacher, providing inspiration and serving as a mentor for later generations of musical theater composers, lyricists, and writers through his many letters, books, lectures, and personal connections.

On Sunday, September 25, in consecutive shows at 54 Below beginning at 7 and 9:30 pm, two groups of established and emerging musical theater artists who learned from the master and are following in his giant footsteps will gather together to pay homage to his creativity, genius, tutelage, and legacy in Writers Celebrate Sondheim, an evening of songs and stories.