Four of Edgar Allan Poe’s stories that he himself regarded as among his best—”The Raven,” “The Fall of the House of Usher,” “The Pit and the Pendulum,” and “The Tell-Tale Heart”—have been brought to life in a highly theatrical adaptation by StageCoach Theatre Company. Directed by Kat Brais and written by Eric Coble, Nightfall with Edgar Allan Poe, is a well-staged mood setter for the Halloween season.

Poe was a wild child, and he got around: Boston, Baltimore, Richmond, and the Bronx. Poe, a poet, short story writer, editor, and literary critic, is known for his poetry and short stories with horror and suspense themes. Poe is a giant in American Romanticist literature. He even contributed to the science fiction genre and is credited with creating the detective fiction subgenre.

The staging of “The Raven” was a triumph of Poe’s words, Brais’ direction, and Scott J. Strasbaugh’s acting. It was all there in Strasbaugh’s performance: the angst, the sorrow, and the lovelornness of Poe. Brais, who did wigs and makeup, put an impressive, black wig on Strasbaugh.

Though he had one repeated line, Justin Meyer, clad in a black robe and hawk-nosed mask, was ominous as the titular Raven. This show was Meyer’s StageCoach debut. Costume Designer Kathy Dunlap set an ominous tone with Meyer’s robe and mask.  Heidi Dodd wordlessly played the tragic lover Lenore. Dodd started with StageCoach’s youth program in 2019.

Allan McRae brought gloom and terror to the tragic “The Fall of the House of Usher” as Roderick Usher.  Michael Sherman (previously seen in StageCoach’s Exit Stage Death and Dead Man’s Cell Phone) played the narrator who visits the boyhood home of his old friend Roderick Usher, on a gloomy day. Fred Muller and Smith created a particularly well-done special effect of rain and wind coming through a door, using a gush of air and droplets of water. The actors played Poe’s scenes and Smith’s adaptation straight, but 21st-century sensibilities made the audience laugh in unexpected places.

Meyer, placed on a wooden table that was inclined toward the audience, brought a sense of dread to “The Pit and the Pendulum,” which involved a death row prisoner being tortured during the Inquisition in the 16th century. April Bridgeman created props that mimicked rats, by using red lights that served as eyes that peaked under walls.

“The Tell-Tale Heart” was my introduction to Poe, as a child. It’s a creepy story about a paranoid, guilt-ridden murderer. While scary for the character of the killer, some of Strasbaugh’s lines evoked laughter, again probably due to the 19th- and 20th-century disconnect between today’s zeitgeist and the writing.

McRae was gloomy as the tragic Old Man of the “The Tell-Tale Heart.” Brais put hideous makeup on McRae to indicate a defective eye.

This show makes for a cozy evening of dramatic horror in a small, black-box theater. Stage Coach lets you bring wine, beer, and snacks into the house (they have lots of paper towels). This is a show that will let you, according to Brais, “indulge your senses. Release your imagination. Drive into the madness that is Edgar Allen Poe.”

COVID Safety:  All guests must wear masks while inside the theater. StageCoach Theatre’s complete COVID protocols are here. 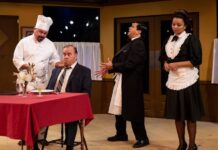