“Today, an illegitimate Supreme Court—stacked with radical conservative justices who lied to Congress about their adherence to the precedents confirming our civil and reproductive rights—advanced their plan to undermine the right to equal protection under the law and the right to bodily autonomy.

“To say we are outraged by the immoral and constitutionally questionable opinions from the Supreme Court in Dobbs v. Jackson Women’s Health Services is an understatement. Make no mistake: to rip vital abortion care out of the hands of millions of Americans who may need it is a devastating act of political violence. It will also be disproportionately lethal to Black and poor women who now will lose their already-limited access to abortions.”

Women, more than men, have always been identified with their bodies. The Supreme Court’s ruling in Dobbs, which overturned Roe v. Wade, is a clear and present danger to women’s bodies. We have all been forced to endure the ignorant comments of conservatives, mostly men, who have no idea what a woman’s body is or what it can do. Now we face a Court that has caused women, their rights, and even their health and well-being, severe and lasting harm.

Molly Smith’s final production as artistic director of Arena Stage, My Body No Choice, is her response to the shock of that disgraceful ruling, which has relegated the women of America to second-class citizens.

“I knew I had to make a theater piece in response to this horrifying decision,” Smith has said. “It’s my final production as Arena’s Artistic Director, and setting it in a consciousness-raising space like women had in living rooms in the ’70s felt like the absolute right action to take. We all need to raise our consciousness together.”

Twenty theaters and universities from across the United States, from Michigan to Montana, and from Hawai’i to New York, will stage their own readings of eight monologues commissioned by Arena centering on female bodily autonomy and choice.

The women in the cast sit in a semicircle, in assorted chairs, facing us. In the center is an Oriental rug. The setting has the feel of a real consciousness-raising group. These brave survivors of life in a woman’s body have come together to tell their stories.

The first monologue, by Sarah Ruhl, performed superbly by Jennifer Mendenhall, welcomes the audience to a high school graduation address, at a Catholic college. The speaker, an alumna, was a star debater and was pitted against Jesuit Poly Prep (all boys). The theme: life begins at conception. She argued the con side, and won the semifinals.

The boys were pretty annoyed that she won. Because of this, she is subjected to horrendous abuse with disastrous consequences. She is able to recover from these consequences thanks to an abortion. Today in Texas, according to current law her doctor would be in jail.

Felicia P. Fields brings warmth and wry humor to the story of a woman who navigates life within a “big” body. This has caused her much pain: “A female,” she says, “should NOT take space. I was always told that.”

During COVID she has time to pause and reflect. She looks at pictures of herself when young. And she remembers.

Lizzo’s “body positivity” comes to mind as Fields celebrates her right to choose her body size. By the end, we can all see what she has to offer: inspiration, self-confidence, and wisdom.

A successful playwright and her husband go into her pregnancy with high hopes and no thought that anything will go wrong. Unfortunately, something does. She suffers a real tragedy: an “intrauterine fetal demise.” A thoughtful nurse tells her, “Trust your body. It knows when things aren’t right.”

Now, in the middle of a new pregnancy, she ponders the fact that after Dobbs she might have had to carry the first baby to term, with risks to her life and health.

Shanara Gabrielle gives a fine performance in this chronicle of one woman’s unthinkable loss, now made infinitely more harrowing for others by the overturning of Roe.

A Rest Stop by Fatima Dyfan with Deidre Staples

Fatima Dyfan recounts the struggles girls face as they mature. Actress Deidre Staples reminds us vividly of the agony and embarrassment of the first period. The awkward scene with her mother who says little and gives her “jumbo old people pads.” She describes the ordeal of a trip to the store.

It’s hard to even make it to the register to get your needs met. Beep, cranberry juice. (Smile). Beep, pads (Shrug and smile). Beep, Monistat. (Looks down) it’s a little hot this summer… (To herself) why didn’t I grab the store brand… it’s like half the price… (Back to imaginary person at the register—becoming her) “Ma’am, ma’am, this PREGNANCY TEST… it’s not scanning. Wanna grab another one?” (Back to herself) No (Looks at name tag) John, I don’t wanna grab another one. So I got one delivered straight to my apartment in a little discreet bag.

The Circumstances of My Birth by “Anonymous” with Joy Jones

Joy Jones begins by telling us:

Her mother at that time had no money. She and her boyfriend lived with their parents. And she had a prestigious fellowship. What would white people say if she bailed? She would disadvantage the next Black woman who applied. There were many reasons her mother might want an abortion, and yet ultimately didn’t get one.

This woman’s mother lavished her with praise, encouraged her consistently, and yet felt it was important for her daughter to understand her own history, even the parts she might not want to know. Jones’ moving performance helps us to understand.

First, Dani Stoller is going through pictures her mother left her. One leaves her shattered:

At the very bottom of the stack was a picture that stopped my heart. I had to look a few times. Yes, it was definitely me as a baby, but I was a battered baby. Two black eyes, bruises over my eyebrows, a bloody slash across my nose. I looked like a thug, a baby thug. A battered thug baby.

A childhood full of abuse and heartbreak leads her to drink, drugs, and a chaotic adult life. Abortion is only one of the many traumas she has endured.

Stoller brings spirit, athleticism, and deep insight to the portrait of a woman who has likely been abused since babyhood. Her honesty as an actress is so palpable that we admire her more and more for her stoicism and ability to persevere.

Salmi tells us about many of her mother’s admonitions, some of which we may find familiar. Any girl who wears spaghetti straps is “asking for it”. She says:

My mother didn’t worry much about seatbelts, but she told me, “Nice young ladies don’t stick their heads out of car windows to woo-hoo at boys.” Also related, my mother told me, “Remember keep your knees together when you get into and out of a car” — which is almost impossible.

Her mother keeps trying to be the “good mother” right to the end.  Salmi says:

My mother thanked me for deciding to have another baby after my first baby died during childbirth. All the doctors told me not to because the next time, I might die too. I told them to fuck off. My mother told me, “What do doctors know? Listen to your heart.”

Trouble comes between these two when the seriously ill mother wants to end her life: another bodily choice. According to the laws and rules of that time, she has no right to.  And her daughter is vehemently against it. Salmi conveys the complexity of this relationship with sensitivity and grace.                                     \

Roxy raises her hand and bursts in from the audience. She is facing the agony of choice right here, right now. She is over 18, pregnant, and alone. Her mother is from Puerto Rico and worked in a factory where women were actually sterilized.

Last week they shut down the clinic near my school — so I drove to another state and found a clinic near where my mom lives. But there was a twenty-four-hour waiting period, and I’d already driven a day to get there… I mean, I had to get back to my job — I mean, I can’t afford to do this and lose the pay!

The first doctor refuses to help her because she is too many weeks along. She has to drive to DC to get an abortion.

“So the law here says I have the right to do this — and the law back home wants to put me in jail?!” What kind of country is this? What’s gonna happen here? Roe v Wade was there for one reason — to allow me to choose!

Arena Stage has invited audience members, particularly women, trans, and non-binary individuals, to share stories about the choices they make and the choices they cannot make about their bodies. Smith and her creative team seek to gather and share a wide range of stories in order to normalize discussions about abortion, reproductive choice, and the reality of existing in a female body. Those video stories are playing in Arena’s lobby through the run of My Body No Choice.

The message of My Body No Choice is not to despair but to keep fighting.

“Life is a hard battle anyway. If we laugh and sing a little as we fight the good fight of freedom, it makes it all go easier. I will not allow my life’s light to be determined by the darkness around me.” ― Sojourner Truth

The program for My Body No Choice is online here.

COVID Safety: Arena Stage requires that patrons wear facial masks while in its theaters. Arena additionally recommends, but no longer requires, that patrons wear masks in the Mead Center’s large open spaces, such as the Lower Lobby, Grand Lobby, Molly Smith Study, and café area. Arena employees and volunteers will maintain masking in all spaces. These conditions are subject to change, and Arena continues to consult with medical professionals, monitor government best practice recommendations, and engage in industry trainings to ensure the health and safety of our patrons, artists, and staff. For up-to-date information, visit arenastage.org/safety. 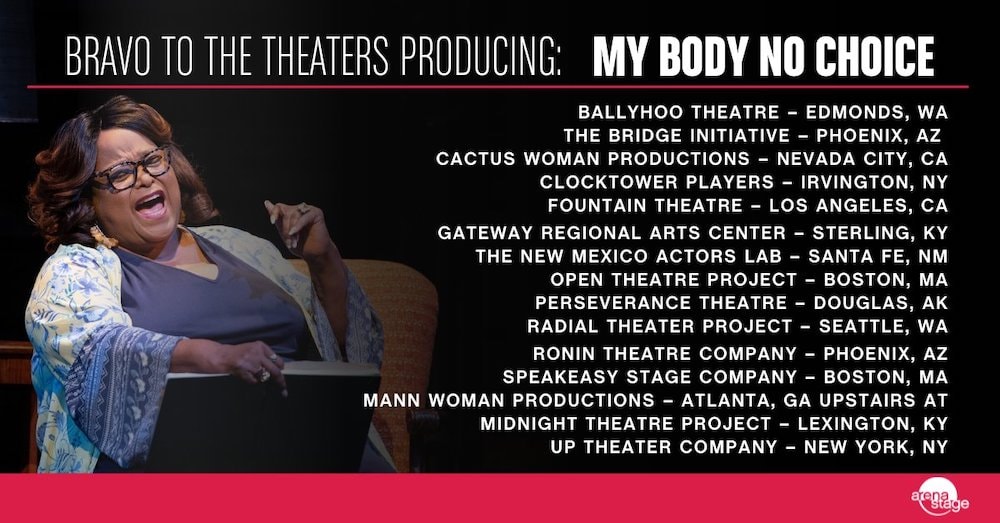