The Off-Broadway debut of Sandra at Vineyard Theatre launches its 40th season and marks the highly anticipated reunion of playwright David Cale and director Leigh Silverman, the team from the multiple award-winning 2017 production of Harry Clarke, starring Billy Crudup. While the new work, described as a “one-woman thriller,” follows the same formula as their previous solo show, it lacks a plausible plot, believable behavior, and a credible conclusion, rendering it unlikely, unsatisfying, and less than thrilling.

The direct-address narrative follows the reckless journey of the titular character, who owns and operates a café in Brooklyn, is separated from her husband of thirteen years, and is trying unsuccessfully to avoid alcohol. When her best friend Ethan, a gay pianist and composer (who gifted her a CD of his original music for “an imaginary movie entitled Sandra,” with a drawing of her wading in the sea on the cover), doesn’t return from a trip to Mexico, she decides to fly to Puerto Vallarta – alone, more than once – to solve the mystery of his disappearance. There she discovers that two other young gay men went missing in Cozumel, strikes up conversations with suspicious strangers, and engages in an affair with one of them – a handsome hard-drinking Italian named Luca. Despite the dangers she encounters and the threats she receives through her amateur investigation and subsequent court testimony, she illogically persists out of love and concern for her “simpatico” BFF and, amazingly, lives to tell the improbable story and its dream ending.

Under Silverman’s direction, Marjan Neshat’s recitative portrayal of Sandra holds our attention but seems too light and emotionally underdeveloped for a woman knowingly and repeatedly placing herself at high risk, in a performance punctuated by girlish accounts of Luca’s appeal and their sexual escapades, histrionic facial expressions, and eye rolls. She’s at her most expressive when imitating the accents of the international characters she re-enacts, from the American South to Italian, Mexican, and Australian (vocal coaching by Kate Wilson), as she moves around the stage or sits in the sole centrally placed chair that her husband left when he removed everything else from their apartment.

For a self-described “thriller,” the most gripping scenes are those that suggest a film-noir sensibility, as created by the top-notch design team. Thom Weaver’s evocative mood lighting shifts in color and intensity with the locales Sandra describes and perfectly captures the blackness of the night and the menacing situations in which she places herself, with long rays of directed spotlights that illuminate her in the darkness and cast ominous shadows. Sound by Kathy Ruvuna supports the situations and heightens the emotion, and original music composed by Matthew Dean Marsh plays a significant role in defining the missing Ethan and the different segments of Sandra’s narrative. Rachel Hauck’s set is minimal and confining, with the chair placed between two free-standing side walls with large windows and deteriorating plaster on the patterned back wall, and the one costume by Lindo Cho is plain and simple; both help us understand why the character dreams of love, adventure, a new life, and a happy ending. 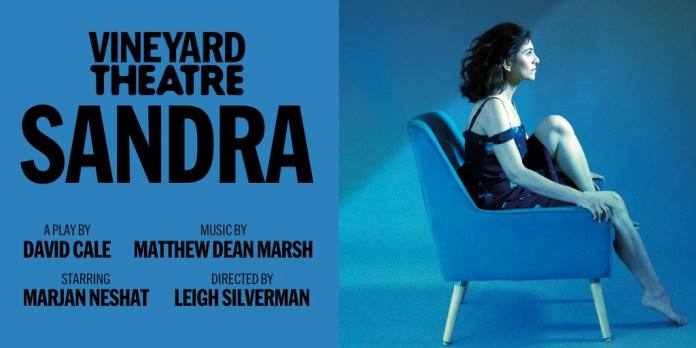