One of the most beloved works of prose by Welsh writer and poet Dylan Thomas (1914-53), A Child’s Christmas in Wales was begun in the 1940s, first recorded by the author for his BBC Radio broadcast in 1952, and posthumously published under its well-known title in the format of a short book in 1955. In 2002, Off-Broadway’s Irish Repertory Theatre premiered its acclaimed musical adaptation of the nostalgic classic by Artistic Director Charlotte Moore, which, by popular demand, was revived for the 2010, 2011, 2015, and 2018 holiday seasons. It’s back again this year for the sixth time, and it’s as charming and heartwarming as ever.

The iconic text presents a fictionalized account of Thomas’s younger self recounting anecdotes and reminiscing about his idyllic childhood memories of one joyous snowy Christmas with his family. Filled with poetic descriptions and youthful enthusiasm, the recollections evoke a happy time in the past, of both sentimental and comic moments. For her adaptation, Moore intersperses the passages, seen from the child’s wide-eyed perspective but recited by both the boy and the characters he recalls, with traditional Christmas carols, Welsh lullabies, contemporary holiday songs, and her own original compositions.

The result is a mood-setting concert-style presentation, performed by an affable and vocally skilled ensemble of six – Kerry Conte, Ali Ewoldt, Jay Aubrey Jones, Kylie Kuioka, Dan Macke, and Ashley Robinson – and accompanied on stage by Music Director David Hancock Turner on grand piano, with music supervision by John Bell. Along with their masterful singing, the ensemble rings Christmas bells in a few of the numbers (including Moore’s “Ring Out the Bells”), adding to the old-fashioned authenticity of the celebration and the vision of familial unity.

Directed by Moore, there is little action or interaction among the actors, no feigned Welsh accents (except for one instance), just a reliance on the beauty of the writing and the music to conjure visions in our mind’s eye. The staging is simple, with a row of six chairs on which the cast is seated, rises, or briefly walks around for their direct-address solo recitations and songs, or group harmonies and duets, with minimal reenactments of the situations. Instead, there are attentive gazes and affectionate smiles directed towards each other and the audience, holding hands (for Moore’s “Take My Hand, Tomorrow’s Christmas”), and embracing of the characters’ different personalities and feelings in their oral deliveries of the young Dylan’s reflections on the people, snow, presents, and food he enjoyed, or didn’t – as expressed in the well-chosen 1883 Vaudevillian song “Miss Fogarty’s Christmas Cake” by C. Frank Horn, in one of the funniest and liveliest segments of the show.

An elegant set (by John Lee Beatty), with multiple Christmas trees decorated with strings of white lights, a central wreath above, wrapped presents below an upstage tree to the left, and a red Oriental carpet on which the chairs are arranged, capture the merry spirit of the season, as does the holiday dress attire the characters wear (costumes by David Toser). Lighting (by Michael Gottlieb) changes with the times of day and the content and tones of the anecdotes. Concluding with an uplifting group rendition of “Deck the Halls” (a traditional 16th-century Welsh melody with English lyrics written by the Scottish musician Thomas Oliphant in 1862), Irish Rep’s adaptation of A Child’s Christmas in Wales is a jolly and entertaining musical tribute, with a vocally skilled cast, to Thomas’s “never to be forgotten day at the end of the unremembered year.” 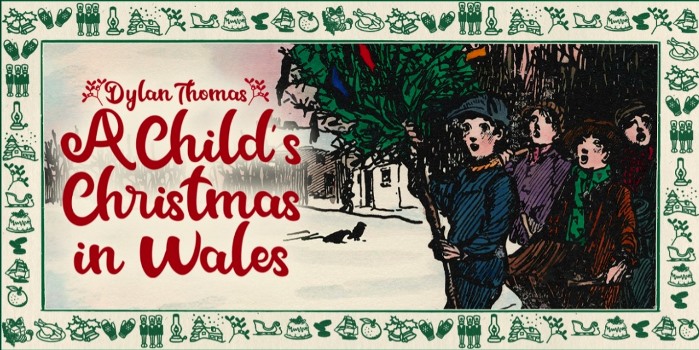 A Child’s Christmas in Wales plays through Saturday, December 31, 2022, at Irish Repertory Theatre, 132 West 22nd Street, NYC. For tickets (priced at $50-70, plus fees), go online. Masks are required in the theater.