A sold-out star-studded house welcomed the return of Mark William to The Green Room 42 with his latest show Technicolor Dreams, a smartly curated cabaret of songs and reflections that expressed his most ardent and relatable aspirations – for finding love, reaching the heights of success, wishing for a happy holiday season, and hoping for a better world, free from trouble and divisiveness. Produced and directed by Preston and Richard Ridge, with Daniel Dunlow serving as Production Coordinator, William brought his award-winning signature combination of the youthful look of a new generation with classic crooner stylings and a mature voice that make him the consummate singer’s singer, attracting such luminary audience members from the stage and screen as Jana Robbins, Haley Swindal, Sandy Duncan, and more to the one-night-only performance, which was also livestreamed for fans who couldn’t be there in person.

Introduced by the hilarious Dunlow (with roots in stand-up comedy) and backed by a top-notch six-piece band (Musical Director and Arranger Matthew Lowy on piano, Jonathan Ward on drums/percussion, AC Muench on bass, Jakob Reinhardt on guitar, Josiah Lamb on trumpet, and Dan Meinhardt on saxophone) that opened the show with an engaging mood-setting overture, William performed a set list of twelve numbers, plus an encore, following an ebullient standing ovation from the crowd. They included standards from musical theater and the movies, pop and jazz hits, Christmas favorites, and his own original compositions, which highlighted his rich and resonant voice, impressive vocal range (bass/baritone), amazing breath control on the long notes (of which there were many, all executed flawlessly), and genuine feelings for the songs he selected, enhanced by his smooth moves, eloquent gestures, and emotive facial expressions, ranging from playful to poignant.

Between numbers, William shared with fans the sources of his inspiration, from his mother, who was in attendance at the show, loved the theater, and encouraged him to sing songs from the cast albums she collected (represented by “The Music that Makes Me Dance” by Jule Styne and Bob Merrill, from the 1964 debut of Funny Girl) to Peter Allen (honored with “The Peter Allen Suite” of “Just to Get My Name in Lights/Everything Old Is New Again/All I Wanted Was the Dream” from the 1998 jukebox musical The Boy from Oz – a sensational medley that also appeared on William’s 2019 debut album Come Croon with Me) to the late Angela Lansbury, whom he got to meet (and to whom he paid tribute in “It’s Today/We Need a Little Christmas” by Jerry Herman, from the 1966 Broadway premiere of Mame). He also acknowledged the impact of the many other icons he’s encountered and whose work has motivated him to write his own songs – among them Melissa Etheridge, seen recently in her new Off-Broadway show at New World Stages (inspiring his original “Open the Door,” which he segued into Walter Marks’ meaningful and affecting “I Gotta Be Me/Golden Rainbow”).

Other selections that captured both the theme of the show and the talent and versatility of the artist were the upbeat “Love Is in the Air” (the 1977 hit by George Young and Harry Vanda); the slower paced jazz stylings of “Feeling Good” (by Leslie Bricusse and Anthony Newley, from the 1964 musical The Roar of the Greasepaint – The Smell of the Crowd); the well-crafted medley of “The Girl from Ipanema/The Look of Love/The Way of Love” that together forged the progression of a love story; and “Power of My Name” – an original by William and Andrew Morrissey from their new musical-in-development Dorian’s Wild(e) Affair, begun during the pandemic quarantine and set in NYC in the 1970s, which takes a look at all the dreams New York has to offer.

The evening closed with William’s change into another dazzling jacket for his uplifting encore and expression of gratitude to his enthusiastic audience in “All I Want for Christmas is You” (the 1994 holiday chart-topper by Mariah Carey and Walter Afanasieff). It left everyone clapping, swaying to the beat, and cheering for his, and the band’s, dream of a performance. 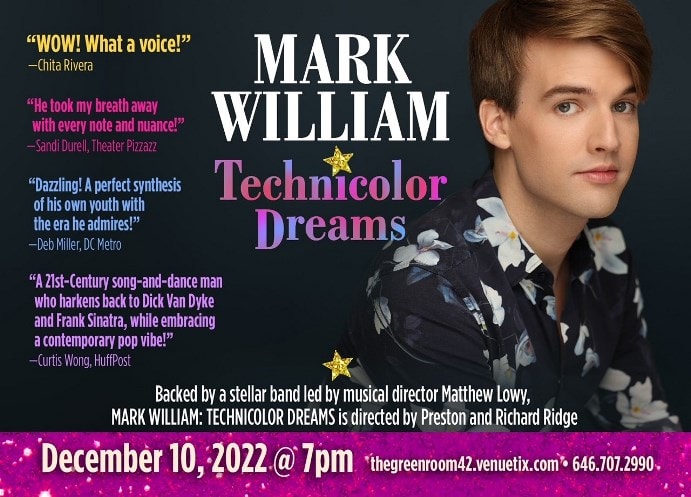