This month’s opening of Ohio State Murders made history as both the inaugural production at the newly renovated and renamed James Earl Jones Theatre (formerly the Cort) and the belated Broadway debut of 91-year-old playwright Adrienne Kennedy – who, in 2021, received the Dramatists Guild of America’s Lifetime Achievement Award and this year joined the ranks of Edward Albee, Tennessee Williams, Eugene O’Neill, and Arthur Miller as one of only five recipients in history to be awarded the Gold Medal for Drama from the American Academy of Arts and Letters, among the many other honors bestowed upon her during her illustrious career.

Kennedy’s non-linear memory play is framed in the device of a famous writer returning to her alma mater to deliver a guest lecture that addresses both her time at Ohio State and the violence that is a prominent feature in her writing. Directed by Tony Award winner Kenny Leon and starring six-time Tony winner Audra McDonald as the writer Suzanne Alexander, the unfolding mystery examines the endemic racism that defined her devastating past at the university, as revealed through fractured recollections of what life was like as a “Negro” female student in the years 1949-50, and the horrific titular crime that haunts her and inspired the brutality that permeates her pages, about which she is speaking publicly for the first time in the 1990s, since the mid-century murders occurred.

Moving back and forth in time, we hear verbal accounts from the older Alexander and watch re-enactments in her mind’s eye of the people she knew and the events she experienced in her younger days at college and beyond. Under Leon’s controlled direction, McDonald’s thoroughly engrossing delivery is restrained and her torment internalized, as she recounts her achronological impressions of what transpired, giving us pieces of the puzzle that reconstruct the rampant bigotry and shocking crimes, who committed them and why, and the cover-up that was designed to spare the reputations of those involved, along with that of the university and its institutionalized discrimination against its gifted Black students. Through subtle changes in the tone of her voice, her facial expression and body language, and the revealing look in her eyes, McDonald captures a full range of emotions in a poignant tour-de-force performance filled with strength and determination, pain and empathy.

What also comes across in her attitude and demeanor is the writer’s love of literature and metaphor, as she reminisces about the classes she took and lectures she attended by her young English professor Robert Hampshire, who enraptured her with his readings and elucidations of passages from Thomas Hardy, the legend of King Arthur, and the symbolism of the abyss, which has a parallel in the so-called “Ravine Murder” of one of the victims, found in one just off-campus on a cold and snowy winter day. Both are represented in Beowulf Boritt’s surreal set and Jeff Sugg’s projection design, enhanced by Allen Lee Hughes’ evocative lighting, with the backdrop of a deep chasm and constantly falling snow, seen behind an explosion of library bookshelves that stand askew and hover above, as if struck by a metaphorical earthquake, in the room where Alexander got the news of the shocking homicide.

The disjointed memories are embodied by the supporting cast of Bryce Pinkham as the aloof and dismissive Hampshire; Abigail Stephenson as Suzanne’s college roommate Iris Ann, a skilled violinist distraught over a romantic breakup; Lizan Mitchell playing the three very different parts of the judgmental college dorm supervisor Miss Dawson, Suzanne’s encouraging Aunt Louise, who puts her up in New York after leaving college, and her landlady Mrs. Tyler back in Ohio; and Mister Fitzgerald in the dual roles of her prospective romantic interest Val, who walks out on her, and her husband David Alexander, who brings a huge smile to her face and gives her his unconditional love and support.

Costumes by Dede Ayite and hair, wigs, and make-up by J. Jared Janas differentiate the characters and capture the distinctive styles of the ‘50s and the ‘90s, and original music by Dwight Andrews and sound by Justin Ellington contribute to the eerie mood of the story. The performance is accompanied by a pre- and post-show audio interview recording with the playwright, produced by Canaan Kennedy, chronicling the years of the real-life Ohio State alum as a student, writer, and world traveler, so be sure to come early to get more insights into her experiences and motivations for this masterfully staged and consummately performed work. 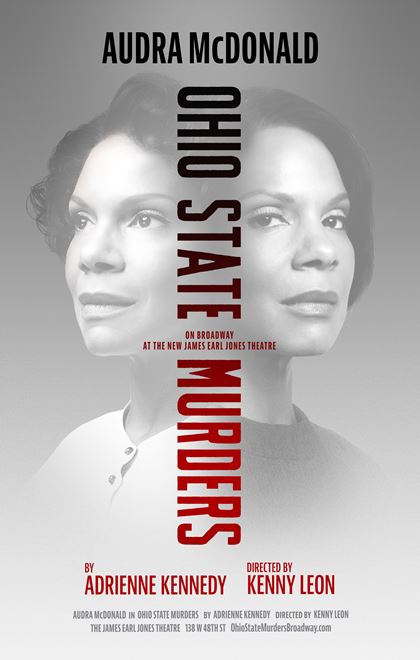 Ohio State Murders plays through Sunday, January 15, 2023, at the James Earl Jones Theatre, 138 W 48th Street, NYC. For tickets (priced at $68-244, plus fees), go online. Masks are no longer required but are recommended.