Jukebox bio-musicals have become a staple on Broadway, with an enthusiastic audience base of fans of the music and the stars that inspire them. The latest in the genre, now playing at the Broadhurst Theatre, is A Beautiful Noise, tracing the life and extensive chart-topping catalogue of Brooklyn-born-and-raised singer-songwriter Neil Diamond. Named for the title song of his 1976 comeback album, the production, which began previews in the fall of 2022, was timed to coincide with another of the musical icon’s many milestones (which include 140 million albums sold, ten Top 10 hits, sixteen Top 10 albums, a Grammy Award, inductions into the Rock and Roll and Songwriters Halls of Fame, and a Lifetime Achievement Grammy and Kennedy Center Honor) – the 50th anniversary of his October 1972 twenty-night sold-out concert series at Broadway’s Winter Garden Theatre. It was the venue’s first solo show since Al Jolson in the 1930s, and it made Diamond the first rockstar to headline a show on Broadway. Needless to say, he has a huge following that will love seeing his story and hearing his songs back on Broadway, as they did at the packed-house performance I attended.

Framed in the device of a recalcitrant “Neil – Now” (played by Mark Jacoby) in therapy sessions with a female psychoanalyst (Linda Powell) at the behest of his current wife Katie and their kids (unseen in the show), the book by Anthony McCarten considers the depression, frustration, loneliness, and “clouds” that hang over him, and their expression in his lyrics (a massive tome of which the doctor pulls out as a catalyst to get him to talk), through a series of flashbacks that follow his journey from humble beginnings to worldwide success and three marriages, interspersed between spectacular musical performances of twenty-nine of his most renowned hits.

While the terse and labored dialogue tends to be heavy on the “woe is me” content (and even jokes about it: “What if woe IS me?”) and doesn’t paint a particularly likeable portrayal of the troubled artist, it’s the songs (music and lyrics by Diamond) that bring on the excitement, energy, and the stellar Broadway-caliber performances of a spot-on Will Swenson, who captures the distinctive stylings and deep “gravel wrapped in velvet” voice of “Neil – Then” and a top-notch orchestra led by the brilliant conductor, music supervisor, and arranger Sonny Paladino (who also served as co-orchestrator with Bob Gaudio and Brian Usifer) on keyboards.

Under the direction of Michael Mayer, the staging is generally uneven, as it waivers between a downer of a libretto, with occasional wisecracks, that lacks any sense of gripping drama or profound revelation, and the exceptional music it’s intended to tie together. It is augmented with oddly out-of-sync neo-expressionist choreography by Steven Hoggett, performed by a vocally harmonious company of backup singers and dancers, called The Beautiful Noise (with a standout understated seated delivery of “Shilo” by Deandre Sevon), that appears not just in the musical numbers but, inexplicably, also pops up in the therapy sessions, as the audience of Diamond’s first show at The Bitter End, and in other unlikely places in his recollections.

Swenson and Jacoby (who have a stirring face-to-face eleventh-hour duet on “I Am . . . I Said”) are supported by a featured cast of characters that includes his wives, his business associates in the music industry, and his anxiety-ridden parents, who express concern about their young son’s introverted and self-isolating behavior. Jesse Fisher takes on the one-dimensional role of his first wife Jaye, who is supportive to a fault and agreeable to parting after her cheating husband-on-the-rise admits he’s in love with his soon to be second wife Marcia – an over-the-top belting and dancing Robyn Hurder – whom he also ultimately abandons after 25 years, in favor of his extensive touring for months at a time away from home. Both are given songs by Diamond that are suited to their situations (“Love on the Rocks” and “You Don’t Bring Me Flowers”).

Bri Sudia (who doubles as Diamond’s mother Rose) is hilarious as the initially impatient but then encouraging singer, songwriter, and record producer Ellie Greenwich, who gives Diamond his first big breaks (writing songs like “I’m a Believer” for the Monkees and other known acts, then pushing him to sing and record his own songs) and introduces him to mobsters Bert Berns and Tommy O’Rourke, played with dark humor by Tom Alan Robbins and Michael McCormick (also seen respectively as Neil’s father Kieve and The Bitter End manager Paul Colby). They sign him to a high-pressure recording contract that launches him on his way to the top and results in his signature smash hit “Sweet Caroline” – which is performed twice by the sensational Swenson, at the end of Act I and closing the show, with the audience invited to sing along (not that anyone needed to be asked).

That and his other favorites (like “Cracklin’ Rosie,” “Cherry, Cherry,” “Holly Holy,” “Brother Love’s Traveling Salvation Show,” “Song Sung Blue,” “Solitary Man,” “America,” and more) are what drive the show and fill the house with exhilaration and vibrancy, enhanced by a superb immersive sound design (by Jessica Paz), electrifying lighting (Kevin Adams), sparkling period-style costumes (Emilio Sosa), hair, wigs, and make-up (Luc Verschueren), and a multi-level set that contains Paladino and the band, with central risers for Swenson (scenic design by David Rockwell), all of which create the authentic look, feel, and sound of a Neil Diamond concert at the height of his fame. It’s why everyone is there and it’s – all together now – “So good, so good, so good!” 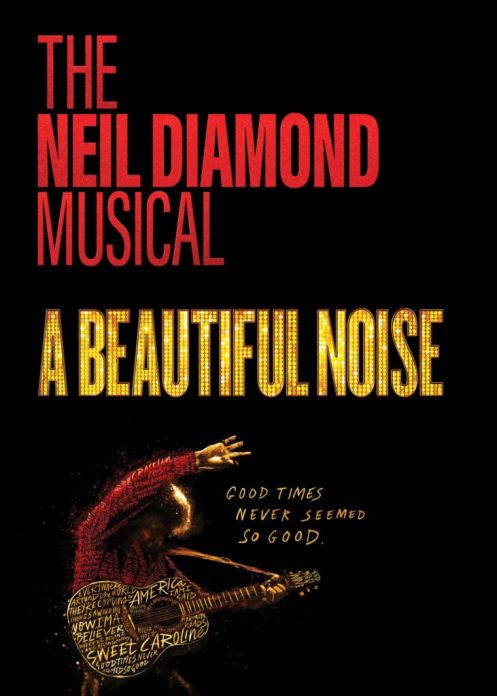 A Beautiful Noise plays through Sunday, September 3, 2023, at the Broadhurst Theatre, 235 West 44th Street, NYC. For tickets (priced at $84.50-399, plus fees), go online. Masks are no longer required but are recommended.