For the next week we will be posting lists of our favorites of 2012 in several categories. These lists reflect the opinions of members of the writing staff of DCMetroTheaterArts. We were allowed to nominated shows and performances we reviewed and did not review – but attended. With over 1,200 productions to choose from, it was not an easy task. 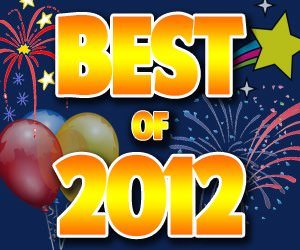 With the amount of riches on our local stages, it’s only reasonable that some of your favorites may not have made our lists – but that’s where you come in!  We invite you to leave comments and to share your own favorites of 2012 with our readers.

Thank you for supporting the theater and arts community in the DC Metro Area, and thanks for reading DCMetroTheaterArts.

Kudos to everyone in our theatre and arts community for your glorious work in 2012! We wish you and your loved ones a healthy and successful 2013 filled with sold-out houses! Congratulations on your wonderful performances in 2012!

Patrick A’Hearn as The Phantom of the Opera in Phantom at Riverside Center Dinner Theater.

Brooks Ashmanskas as John Adams in 1776 at Ford’s Theatre.

Jamar Brown as Tom Collins in RENT at Silhouette Stages.

Ryan Burke as Tevye in Fiddler on the Roof at Montgomery College.

Ryan Burke as Georges/George in Sunday in the Park with George at Kensington Arts Theatre.

James Clow as Bob in White Christmas at The Kennedy Center.

Robert Cuccioli as John Dickinson in 1776 at Ford’s Theatre.

Phil Erickson as Scrooge in Once Upon a Christmas Carol at Run Rabbit Run Theatre.

Bryan Fenkart as Huey Calhoun in Memphis at The Kennedy Center.

James Gardiner as Seymour in Little Shop of Horrors at Olney Theatre Center.

Matt Kacergis as Prince in Cinderella at Olney Theatre Center.

Doug Kreeger as Grigori in Brother Russia at Signature Theatre.

Sam Ludwig as Man 2 in Jacques Brel is Alive and Well and Living in Paris at MetroStage.

Eitan Mazia in Phantom of the Opera at Young Artists of America.

Burke Moses as Harold Hill in The Music Man at Arena Stage.

Larry Munsey as Edna Turnblad in Hairspray at Toby’s Dinner Theatre of Baltimore.

David-Bosley Reynolds as The King of Siam in The King & I at Toby’s Dinner Theatre of Columbia.

Paul Scanlan as Moritz Stiefel in Spring Awakening at the Keegan Theatre.

Bobby Smith (Man 1) in Jacques Brel is Alive and Well and Living in Paris at MetroStage.

Billy Tighe as Fiyero in Wicked at Hippodrome Theatre.

Andrew Varela as Javert in Les Miserables at National Theatre.

Carolyn Agan as Audrey in Little Shop of Horrors at Olney Theatre Center.

Kate Baldwin as Marian Paroo in The Music Man at Arena Stage.

Heather Beck as Anna The King & I at Toby’s Dinner Theatre of Columbia.

Ellie Borzilleri as Esther in Meet Me in St. Louis at Damascus Theatre Company.

Felicia Boswell as Felicia in Memphis at The Kennedy Center.

Natascia Diaz (Woman 1) in Jacques Brel is Alive and Well and Living in Paris at Metrostage.

Sherri L. Edelen as Miss Mona in The Best Little Whorehouse in Texas at Signature Theatre.

Kate Fisher as Abigail Adams, in 1776 at Ford’s Theatre.

Ali Hoxie as Wendla in Spring Awakening at The Keegan Theatre.

Roxy Reynolds as Adelaide in Guys and Dolls at American University.

Caelyn Sommerville as Mimi in RENT at Silhouette Stages.

Farrell Parker as Dot/Marie in Sunday in the Park with George at Kensington Arts Theatre.

Dayne Quincy as Celie in The Color Purple at Toby’s Dinner Theatre of Columbia.

Elizabeth Rayca as Maria in The Sound of Music at Toby’s Dinner Theatre of Baltimore.

Zurin Villanueva as Josephine Baker in Josephine Tonight! at MetroStage.

Bayla Whitten in Jacques Brel is Alive and Well and Living in Paris, at Metro Stage.