I am a huge fan of Matthew R. Wilson and Toby Mulford‘s work. They have brought so much joy to my life and to the lives of our theatre community. When I found out that Matthew and his wife Sarah were both University of Mississippi-bound, I almost put on a mask to hide my sorrow of them leaving the DC area.

But when I heard that Toby Mulford was taking the reigns of Faction of Fools, the mask came off quickly and I was excited for Toby and for all off us Faction of Fools fans.

I have so many fond memories of Matthew’s work and performances and direction to keep me happy for decades to come. And he’ll be back to direct productions in the DC area!! (See below).

And how lucky was I to have seen the final performance of Servant of Two Masters which they brilliantly co-directed at Montgomery College a few weeks ago. And I had a blast writing the review of the show for this site. It’s a souvenir I will cherish.

So thank you Matthew and Sarah and I wish y’all much success in your new Mississippi home and new jobs. And Toby, I wish you much success and I look forward to gathering more Faction of Fools memories.

Here is the press release:

With the backing of their founder and former Artistic Director and the support of their artistic staff, the Board of Directors of Faction of Fools Theatre Company has unanimously voted to hire Toby Mulford as the new Producing Artistic Director effective immediately.

“Toby is the perfect person to assume the role of Artistic Director. His leadership and experience with Faction of Fools is invaluable,” said Board President Dr. Ralph Perrino. “It will provide the continuity necessary to ensure that future Faction of Fools productions entertain theater audiences at the same level of excellence they have come to enjoy.”

Mulford, who has served as Managing Director since 2012 and has been a member of Faction of Fools since its inception in 2009, will succeed founder Matthew R. Wilson. Wilson has accepted a tenure-track position on the performance faculty at the University of Mississippi but will continue acting and directing professionally in the DC area, including with Faction of Fools. He is already slated to direct next season for Chesapeake Shakespeare Company and the University of Maryland and remains at the helm for Faction’s upcoming production of Our Town, which opens at the end of May and features Mulford in the role of Doc Gibbs.

“Matt has set an incredibly high bar,” said Mulford. “The company owes its success to his vision as a director, performer, teacher and scholar. We are far from finished in learning everything that Commedia dell’Arte has to teach us, and I look forward to maintaining the same level of dedication to the craft. Luckily we in the company are very good at standing on each others shoulders.”

Faction audiences have enjoyed Mulford’s work since the debut season when he co-directed and performed in the company’s first ensemble play, The House with Two Doors. Since then he has appeared frequently including as Polonius in Hamlecchio; Nurse/Paris/Benvolio in A Commedia Romeo & Juliet; Marley/Fezziwig/Ghost of Christmas Present in A Commedia Christmas Carol; Geppetto in Pinocchio!; and Marcus in Titus Andronicus. He has created and directed numerous shorts for the company’s annual “Fool for All” and Commedia dell’Arte Day celebrations and directed the critically-acclaimed mainstage production The Lady Becomes Him.

“I couldn’t be happier handing this company to Toby,” said Wilson. “Not only has he been managing our books for years, but he is a brilliant artist. He’s a better deviser than I am, a better improviser than I am, and one of the few people in the DC-area who I can have a conversation about Commedia with and learn something that I didn’t already know.”

Mulford earned an MFA in Ensemble-Based Physical Theatre from the acclaimed Dell’Arte International School of Physical Theatre in Blue Lake, CA, and has studied with many of the world’s experts in the field. For several years, he has served as Associate Artistic Director of Traveling Players Ensemble, where he has taught, directed, and produced numerous student-devised Commedia plays.  He has also performed regionally with Round House Theatre (Amadeus); 1st Stage (One Man, Two Guvnors); Constellation Theatre Company (Absolutely! {Perhaps}); and Dr. Dour & Peach (The Monster Songs).

He recently directed A Servant of Two Masters at Montgomery College and will devise and direct an original Commedia dell’Arte piece at George Washington University in the fall.

“I am so excited to see what this company becomes under Toby’s leadership,” Wilson said. “He has been an ardent student of the art form since before Faction of Fools existed, an invaluable colleague and contributor in our first six years, and someone who cares deeply about training and ensemble development. He’ll sustain a top-notch core of artists who will do outstanding work for DC theatre and the international legacy of Commedia dell’Arte.” 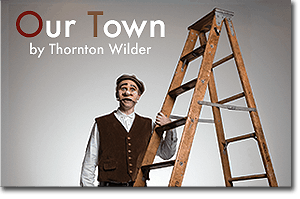 Before he leaves, you will have another chance to see Matthew Wilson and Toby Mulford work together in Faction of Fools’ upcoming production of Thorton Wilder’s classic Our Town performing May 28 – June 21, 2015, at Gallaudet University Theatre Arts Department’s Elstad Auditorium – 800 Florida Ave NE, in Washington, DC. Purchase your tickets here.