Baba is an autobiographical one-man show. I talk about growing up fatherless after mine is murdered, and struggling with identity, bullying, sexuality, and life transitions. This is a summer of Fringe experiences for me! I’m proud to start off at the Capital Fringe and then go back home as an official selection in the International NYC Fringe Fest.

Growing Up Fatherless Let Me Create My Own Personality

Growing up fatherless was hard. It really was a moment in time that forever changed the trajectory of my life. I would see other kids with their dads and hear about their experiences. No one was around to teach me to play catch, or how to shave or tie a tie. How do I ask a girl out on a date? How do I do this or do that? How do I become a man? It was hard not having that role model. But the nice part is I could choose whoever I wanted to be. I didn’t have the other side of having a father, of having to fulfill his expectations. I could do want I wanted without fear of having him disapprove.

My Friends’ Solo Shows Inspired Me to Tell My Story

I have been very touched by solo shows in the past. I have seen friends give of themselves in such a serious and honest way. You hear about something so personal, so unique, but somehow so universal and identifiable. I wanted to share a personal story to help inspire strength during tragedy, to show resiliency and restore faith in others. I’ve learned, as most do, that no matter what happens in life everything can still turn out OK. We just have to work hard and figure out what we want.

I Just Want to Fit In

Also in the show is a desire of mine – and I believe all of us — to fit in. I was fat and socially awkward. I didn’t know how to talk to people. I didn’t have the respect of my peers. I was the loser. I had to figure out to work through that and deal with that. Then later in life, after having success in college, I failed miserably at building a successful career in the real world. And then finally, somehow, I succeeded.

Just an Average Millennial Son of an Immigrant

I think audiences from culturally diverse areas can identify with the show, too, because I also talk about being a child of an immigrant. My dad emigrated from Egypt, and influenced me with the immigrant mentality of “work hard and save your money.” Baba is also my story as a typical millennial trying to figure out how to be a functioning adult. 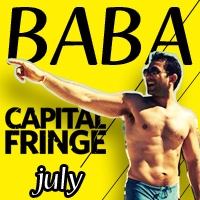