As a medium for understanding what has been going on in the Israel-occupied territories, the art of theater can do something that other  media cannot. Theater can narrate events and tell stories, of course; but it can also make the human emotions in dramatic encounters present and palpable. Theater can make feelings feel so real that we feel something akin to them too. As evidenced by a theater piece that opened last night, the resulting performance experience can be gripping.  “It’s What We Do”: A Play About the Occupation is a powerful staging of a powerful script with a powerful moral meaning. 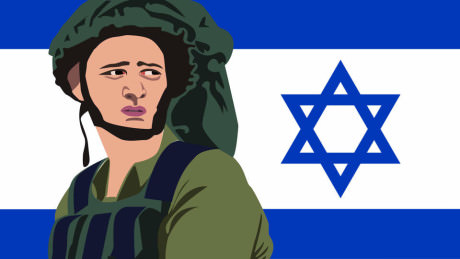 There was barely a sound in the sold-out opening night audience. There was nearly sustained pin-drop silence. Only one brief tragifarcical scene (an amusing bit about border-crossing bureacracy) got an audible response. All the rest of the time it was as if one could hear the audience listening, taking it all in, trying to process the unprocessable—in empathic response to the emotions being enacted and in stilled, chilled bewilderment at the inhumanity being depicted.

At a Busboys and Poets program in fall 2013, Playwright and Director Pamela Nice happened to hear a former Israeli Defense Forces solder speak out about the horrors of the Israeli occupation. That led her to discover an organization called Breaking the Silence, which has assembled a chorus of testimony about those horrors from other IDF service people. (Even a cursory glance at the group’s website offers a troubling look at the experience of soldiers whose consciences were military casualties.) Artfully, Nice has crafted excerpts from truth-telling about the 1967 occupation into a stage play featuring three Solders, composites representing an army of silence-breakers (compellingly played by Olivia Haller, Tariq Triano, and Keanu Ross-Cabrera), who are debriefed by an interviewer, an eerily uninflected offstage Voice (Dior Ashley Brown).

As the soldiers speak their verbatim testimony, their words now and then segue into short scenes, like tableaux vivants, which vividly demonstrate the solders’ horrific acts against Palestinians (who are played variously by a wonderful supporting ensemble: Moses Bernal, Sofia Pellegrino, Jamal Najjab, Xavier Goytia, and sisters Jaelyn and Izabella Cruz).

The cast has clearly been well-directed to communicate the truth of each emotional moment. Time and again, one could read on their faces and in their quavering voices whole chapters of distress where there was but a line of dialogue. And in the midst of the extensive combat choreography—when the Israeli soldiers routinely assaulted the Palestinians—cries of the heart could be heard with heartbreaking immediacy.

“Our mission was to disrupt and harrass people’s lives,” says one Soldier succinctly. And that is exactly what “It’s What We Do” puts on stage: Ransacking homes and blowing up houses (euphemized as “changes of address”). Bulldozing centuries-old orchards. Jewish-only roads that Arabs are forbidden to travel. Brutal checkpoint assaults. Denial of work permits for anyone whose distant relative ever so much as threw a stone at an Israeli (meaning that nearly no Palestinian can earn a livelihood). Doing whatever it takes to defend the Jewish settlers’ claimed authority to live on land that once was Arabs’.

The catalog of indignities and atrocities that were these soldiers’ job to perform leaves them in an agony of inner conflict. They speak of being torn between the national loyalty of being born an Israeli and the awful recognition that that heritage now requires victimizing innocent Palestinian civilians. As one Soldier says, “The settlers are the closest to Jewish Nazis I’ve ever met.”

This is an extraordinary work of theater—disturbing in the most important sense that it provokes real-time reckoning with real-world morals and places the meaning of human emotions center stage. “It’s What We Do”: A Play About the Occupation is a play that one must think about and talk about after. But first and foremost, it must be seen.

“It’s What We Do”: A Play About the Occupation plays through July 25, 2015, at Atlas Performing Arts Center: Lab II – 1333 H Street, NE, in Washington, DC. For a schedule of performances and to purchase tickets, go to their Capital Fringe page.