History assumes that Adolf Hitler killed himself just before the end of World War II.

But what if history were wrong?

What if Hitler, acquitted of war crimes by a U.S. court and absolved of   genocide and guilt, had arrived in New York and begun a second career as an artist, sharing a loft with a Jewish princess posing as a Greenwich Village bohemian? 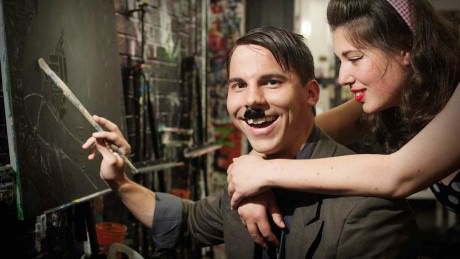 The answer is a mixture of slapstick and satire that has the audience gasping with shock before erupting in laughter.

Playwright Stefan Stoerzinger has turned history inside out, creating a world so outrageous that it makes “Springtime for Hitler”—the play-within-a-play in The Producers—sound plausible.

A native of Austria—which may explain his fascination with Hitler—Stoerzinger has sprinkled many contemporary references into the play, including a diatribe against Mexicans (a nod to Donald Trump) and a joke about the funding of some of the hero’s enterprises.

Hitler, played by a suitably manic Andrew Adams, embarks on a series of adventures in which an unrepentant Fuhrer nearly triumphs over American ideals.

Leading him on the climb to the top is the ambitious Greta Pearl, whose parents—the cousins of Holocaust victims—accept him, but are not exactly warm. Shira Hereld plays the prima donna with a luscious sexiness that is comic in itself.

Mark Mumm plays Bernie Liebowitz, the Jewish defense lawyer who gets Hitler acquitted. (He is chosen for the job by the anti-Semitic partners of his fancy law firm.) Although his Yiddish inflection is a bit wobbly—he would be funnier without it—his zeal for winning a case he would rather lose is so fierce it’s almost scary.

Others in this excellent ensemble cast are Chris Hrozencik, Matthew Edwards, and Cristen Stephansky.

Michelle Kuchinsky has done a marvelous job directing this absurdist comedy in a way that skewers art and politics in America.

Some of the wittiest touches include the selection of art on Hitler’s Greenwich Village wall—images of Klimt, Van Gogh, Renoir, Rembrandt and Michelangelo (yes, even a scrap of the Sistine Chapel is among the looted pieces)—and the background music that accompanies some of the funniest antics. (Think Miles Davis mixed with Klezmer.)

Without giving away any of the surprises of the plot, I can say that this Hitler, true to the original, is done in by democracy. It’s a fitting end to one of the funniest plays at the Fringe this year.