Presented by Tasty Monster Productions in association with Gavin Robertson, BOND: An Unauthorised Parody takes the audience on a wildly hilarious spy adventure that will leave fans young and old entertained the whole show.

This self-aware, one-man parody takes place years after the famous spy’s prime, when a trail of clues is left leading our hero around the world and even through time to come face to face with none other than his creator: Ian Fleming! The show features Gavin Robertson as an impressive myriad of colorful Bond characters on both sides of The Pond, ranging from heroes to villains to women. Robertson, who acts also as the playwright, saunters and scurries around the stage with mesmerizing energy, embodying and switching between characters with ease and dexterity. The one shortcoming with this approach was that the exposition was hard to follow at first, as the audience gets used to what voice and physicality indicates which character. 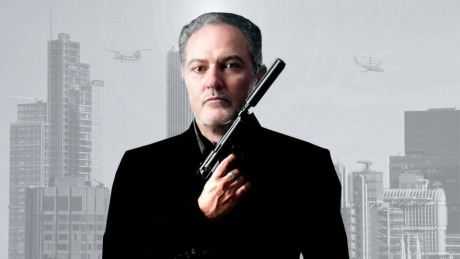 The show itself features nothing more than Robertson and three metal door frames, manipulated and adjusted to indicate location and even modes of transportation at times. The audience follows Bond at a breakneck speed, never dull for a moment whether in London, L.A., the world’s smallest car chase, or even space (!), thanks to director Nicholas Collett. Accompanying Bond along his journey is phenomenal music by composer Danny Bright.

Ultimately, this is an incredibly smart, fun, typical spy adventure yet original story that fans of all ages can enjoy. See it now before you have to use a time machine!

RATING: Best of the 2015 Capital Fringe