The well-known tragic Hamlet, has left many performers and audience’s opinions open to interpretation. It was Ashlin Halfnight’s adaptation that led to this specific modern day reconstruction, Lathem Prince.

Taking place in Brockvill, Ontario, Lathem’s life is thrown together in sporadic puzzle pieces that don’t shift together, leaving you wondering and confused, until the very end. His own corrupt mind pursued many crazy relationships that ultimately led to his tragic downfall. 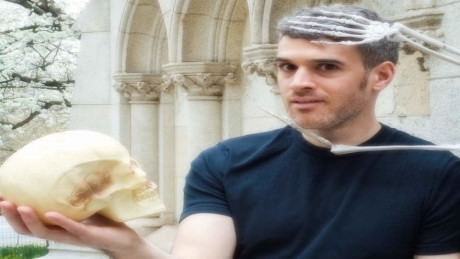 While the majority of the show was thrown into chaotic spiral, when given the chance the performers exemplified impeccable comedic timing. Patio Fortunelli (Christopher Bonewitz) for instance, strode through each moment in hysterics and humor, relieving the overwhelming obsessive behaviors of his counterparts.

Jordan Kaplan’s devotion showed the hopeful yet distraught Lathem as he tried to solve the dysfunction he fell into.

With the bad outweighing the good, a major reoccurring theme was the sexual tendencies of Gertie Prince (Regina Gibson) and Claude Husier (Eric Emil Oleson). Their graphic scenes uncomfortable for both son, Lathem, and the audience, they provided greatly to the unpredictable nature of the production.

Each actor exemplified great confidence in their dynamic roles. Their dedication and commitment to the psychotic roles twisted and heightened tension and hopefulness throughout the chaotic tragedy.

Beginning and ending with the click of a switch, light cues dramatized the erie feel of the darkly lit stage. Limited space did not prevent Bradley Wehrle’s creation of a simple but intricate set. From the sunny pool to the ghostly graveyard, the cast made creative use of minimal set and props to differentiate each insane scene.

Complementing the performance, Peyton Berry’s sound cues easily matched the fast pace of every scene change and helped develop a relatable mood through the use of hit music from each time. The designers effort towards the show, especially lights, strengthened the curious attachment between stage and audience.

Hunger and Thirst’s production of Lathem Prince is shocking and very unique and dark and a ‘must see’ of this year’s Capital Fringe.