Every Christmas Story Ever Told (And Then Some) got its start in 2003 when Michael Carleton, James Fitzgerald, and John K. Alvarez wanted to escape performing the same old tired story of Dickens’ A Christmas Carol at the Cape May Stage where Carleton was the Artistic Director. The three playwrights put their heads together and wrote a hysterical spoof of every well-known Christmas story every written from The Grinch Who Stole Christmas to Rudolph the Red Nosed Reindeer, as well as, every Christmas carol ever sung. Hence, this funny and charming parody was born.

Silver Spring Stage does an incredible job presenting this crazy and hilarious fractured holiday romp.  I can assure you that Every Christmas Story Ever Told (And Then Some) will make you laugh until you cry.  You can tell from the start that this was a collaboration of actors and creatives made in theatrical heaven.

The play begins with a single actor on stage Shaquille Stewart (Shaq) setting us up for an evening of Dickens’ A Christmas Carol. As the two other actors join him on stage Alex Prete (Alex) and Patrick O’Connor (Pat) as their respective Dickens characters, they begin to try to convince their fellow actor that they need to do something new and refreshing.  This doesn’t sit well with Shaq who is clearly getting into his character with great gusto. Alex and Pat then convince Shaq that the audience should give some suggestions on what they would like to see.  At this point, we know that there will most definitely be audience participation throughout the evening.  From here on in, we begin a hilarious journey which crescendos into Act II with an inspired simultaneous melding (Mashup) of A Christmas Carol with It’s a Wonderful Life and a brilliant finale of every Christmas song ever sung.

The mood for the evening was set from the minute you walk into the theater space. Bernie Gabin and Joseph Gabin’s fractured set design and bright lighting design tells us something funny is afoot. The presence of a very rumpled Christmas tree is the centerpiece of the stage, which later in the production gets decorated with odd various and sundry items by the actors such as a milk carton and cereal box. The rest of the stage is simple in nature with two wreathes on either side of the back walls of the set and a garland draped in the center back wall. There are a couple of trunks on both stage right and left which are used for obtaining props and costume pieces by the actors throughout the show. My favorite set piece is a large menorah made from bottles of liquor with the center light represented by a bottle of Jack Daniels. It gave me a good giggle even before the show started. The designers even decorate a permanent pole on the stage with a  cardboard sign with the words “North Pole” written in Crayon.

The back stage right and left sides of the stage were also used for projections which served as comic references throughout the production using several icons of pop culture and politics. Projection and Video Designers Aron Brall, Susan Brall, and William Brall did a wonderful job picking out just the right projection for each scene. A great example is the reference to the Grinch who was projected as Donald Trump in green face wearing the Grinch’s iconic Santa suit.

J.J. Shurtleff’s costume designs were spot on. The actors starting out in simple Christmas tee shirts and pants, adding on the different costume pieces as they merged from one character to another. The use of wigs, hats, and accessories brought their crazy character portrayals to life. 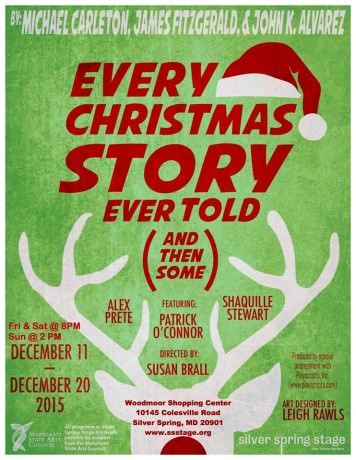 Director Susan Brall did an inspired job in the casting of the three amazing actors in this play. Being able to recognize the chemistry between Shaquille, Alex, and Patrick is an art unto itself. Without chemistry this show would just not work as brilliantly as it did. Brall’s movement of the actors into the audience and around the stage was seamless. You never knew where they would appear next which kept the audience on its toes.

Shaquille Stewart (Shaq) was a perfect foil for the other two actors. He always seemed to be the voice of reason in a strange, but wonderful journey in a wild and wacky Christmas smorgasbord of Christmas stories. I particularly loved his interweaving characters of “I particularly loved his interweaving characters of Ebenezer Scrooge from A Christmas Carol and George Bailey of It’s a Wonderful Life in Act II.

Alex Prete (Alex) was a constant showstopper. His ability to go from Frosty the Snowman to a Christmas game show contestant was amazing. Prete’s expressions and enthusiasm were completely contagious. In Act II, he got the biggest laughs as he seamlessly moved from Clarence, Mr. Gower, Uncle Billy, Mary Hatch, Harry Bailey, and little Zuzu in the It’s a Wonderful Life spoof.

Patrick O’Connor (Pat) was most definitely the master of ceremonies of this piece. He guided each of his fellow actors through the journey of shows and songs effortlessly. He seemed to be the glue that held his fellow actors together. I loved his enthusiasm and energy.

In these last few weeks of the hustle and bustle of the season, I implore you to take the time out of your busy schedule to see this wonderful and hilarious evening of theater. If laughter is the best medicine, Silver Spring Stage’s hilarious Every Christmas Story Ever Told (And Then Some) has the perfect cure.

Running Time: Two hours and 10 minutes, with one intermission.

Every Christmas Story Ever Told (And Then Some plays through December 20, 2015 at Silver Spring Stage – 10145 Coleville Road – in the Woodmoor Shopping Center, in Silver Spring, MD. For tickets, purchase them at the box office, or online.

LINK:
Silver Spring Stage Presents ‘Every Christmas Story Ever Told (And Then Some)’ December 11-20th by Michael Kharfen.