When Todd Olson began his present position as Executive Director of the Columbia Festival of the Arts in 2013, he decided to change the format of the program to include a program for every season. 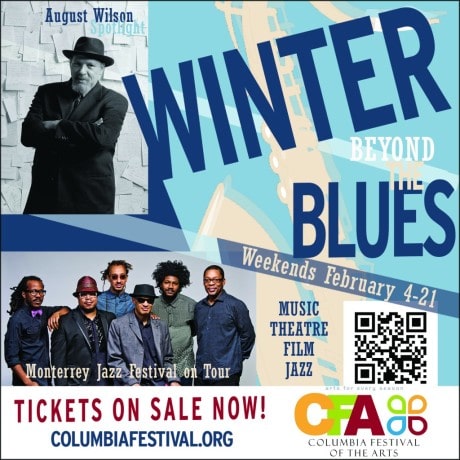 The winter festival takes place this year in February during Black History Month. What could be more appropriate than focusing on the the contribution of Black artists from art to poetry to painting, and from jazz to theatrical productions? 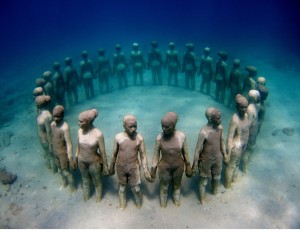 The Festival begins by highlighting one of the great American playwrights of the last 50 years, August Wilson. There will be a lecture entitled “The Ground on Which He Stood” on Thursday, February 4th at 7 PM, which is followed the next day at 7 PM, by a theatrical reading of his play, Gem of the Ocean, by The Pittsburgh Playwrights Theatre Company.

The second weekend will pay homage to one of the greatest contributions to our culture by African-Americans – jazz – culminating with the Monterrey Jazz Festival-On Tour on Valentine’s Day at 6 PM. The weekend also includes a Saturday Afternoon of Jazz with Vince di Mura at 4 PM. 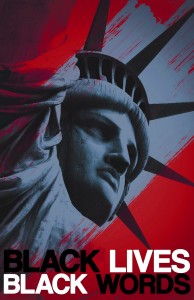 The last weekend brings us six short plays from a new theatre movement called Black Lives, Black Words, as well as our first look at a play that will be performed for Columbia’s 50th Anniversary in 2017 called Columbia Voices by Gwydion Suilebhan.

There are also two wonderful films – 20 Feet from Stardom and Fruitvale Station, an art opening and blues concert with Samuel James, a poetry advent with HoCoPoLitSo and a conversation with Kwame Kwei-Armah from Center Stage.

I chatted with Todd Olson about the upcoming Winter Beyond Blues Festival:

What inspired you to call this Festival Winter Beyond the Blues?

It all started with August Wilson, for whom the blues is most important. His canon reaches from the end of slavery, through the great migration north, into the present…and I loved that arc, and I want this festival to be the beginning of that decade-long cycle of plays that he left – one for every decade in the 20th century. And of course I love blues music too

Why did you choose August Wilson’s Gem of the Ocean, and how did you come to find the Pittsburgh Playwrights Theatre Company?

The Founding Artistic Director, Mark Southers, directed August Wilson plays for me when I was at American Stage Theatre Company. Mark was the Artistic Director at the August Wilson Center in Pittsburgh, and is an accomplished playwright and poet himself, and traveled the world with August Wilson when he was alive. Gem of the Ocean is the first in Wilson’s Century Cycle – 10 plays about the African American experience in America, each one talking place in one of the decades in the 20th century.

Again, having the Monterey Jazz Festival is a coup. How did you get them to leave sunny California for snowbound Maryland?

By accident, they had a date. They lost a date. We were the beneficiary. It happens some times.

Tell us about the two films you selected for the Festival.

I thought Fruitvale Station was a powerful true story about an event that still has resonance today. It has a brief distribution but I thought deserved another showing, especially given the actor and director’s recent critical success in Creed. 20 Feet from Stardom is a great insight into another African-American experience, celebrating the accomplishments of the finest unsung heroes of popular music – the background singers.

Are there any of the playwrights in Black Lives, Black Words that you think are writers to watch in the future?  Do you know how these works were chosen by this new theatre movement?

BLBW is a new movement that gives young African American playwrights an opportunity to share works from their own experiences. They are immediate and relevant, and an inside look at current events through their unique lens. They come from Chicago to London and I think they’re all ones to watch.

I have read about the play commissioned by Gwydion Suilebhan. Can you tell our readers a little bit of background and when it will be finished and performed?

When I first arrived in Columbia in 2013 it was clear to me that this community had an important anniversary coming up, one worthy of reflection. Gwydion’s plays have been produced all over the country, though he lives in Silver Spring (and lived in Columbia for a time). He has had access to the Columbia archives and has done numerous interviews with Columbia residents, and these readings are a way of checking in on his progress and provide feedback. Last October, we read 4 scenes which were ready, and the talkback lasted longer than the reading. Columbians have a lot to say about the legacy of their community, which only gives Gwydion more fuel. He has now completed Act 1, which we will hear for the first time in February.

Tell us about your partner event and a little about HoCoPoLitSo.

HoCoPoLitSo has been a great friend for many years and we constantly support and co-produce together. This sounds like a fascinating hybrid event (my favorite kind) because they are a unique enmeshing of multiple art forms.

If you were going to recommend one or two programs that should not be missed, which ones would you choose?

Monterey Jazz Festival on Tour, and Gem of the Ocean. One is Grammy-winning legends in the making, and the other is the first of an unforgettable series of American masterpieces.

What are the costs for the programs? Are there discounts for students and seniors?

We always have a wide range for all tastes. Some events are free, and the larger concerts are more expensive. All discounts can be found on our website.

What can we expect at the spring and summer festivals?

We continue to do what no other organization can do in this region: provide quality, multi-disciplinary arts experiences at affordable prices, presented all over Howard County.