Maybe you’ve been to a storytelling show before, but you’ve never been to one quite like Perfect Liars Club. Other shows may tickle your funny bone or warm your heart, but only Perfect Liars Club will unleash the Type A tiger curled up in your D.C. soul.

The concept is deceptively simple: Four storytellers regale the audience with four personal and humorous tales. Three are telling the truth, but one is lying — and the audience has to figure out who during the show’s raucous and rowdy interrogation round. Think you can spot the liar? History indicates that you’re wrong — show audiences have been less than successful over 75% of the time.

“I cast the show, and I’m always surprised at who the audience calls out as the liar,” says Cara Foran, Perfect Liars Club Co-Producer and area storytelling stalwart. “There’s an alchemy to the interrogation round that’s impossible to predict.”

One thing that IS predictable is audience members’ drive to ask the most astute question and uncover the truth. “This is D.C.,” laughs Co-Producer Pierce McManus, another D.C. storytelling mainstay. “Everyone always wants to be the smartest person in the room. It gives the show a unique energy that I haven’t felt anywhere else.”

Launched in 2013 by Layla McCay and Roz Campion, Perfect Liars Club was an instant sensation, selling out its monthly event at the Science Club within minutes time and again. Under McCay and Campion’s leadership, the show sold out its entire Capital Fringe run in 2014, seducing even more shrewd fans from across the region.

Now run by Foran and McManus, Perfect Liars Club plays the first Wednesday of each month at The Bier Baron Tavern,  drawing a devoted fan base that snaps up tickets as soon as they go on sale. It’s not uncommon to see office happy hours, birthdays, and first dates in the crowd.

And this year’s Capital Fringe run promises to be bigger and better than ever, with the most talented tellers from D.C.’s thriving story scene appearing in the show’s largest venue yet, Meeting Room A:5 in Martin Luther King, Jr. Public Library

Foran and McManus have also teamed up with other area storytelling and comedy producers to offer a prize pack of tickets and other surprises at each show.

The tagline says it all: Listen. Laugh. Interrogate. Vote. Come find out if you can spot the liar! 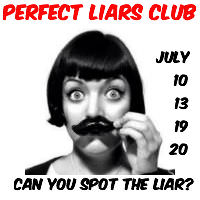 The library is located on the corner of 9th and G Streets, NW and is a short walk from the Gallery Place – Chinatown Metro station. NOTE: The venue is in the basement of the library and can be accessed via the elevators to the rear right of the Great Hall.