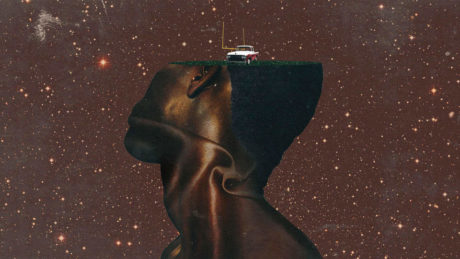 Written by rising senior at Howard University Alric Davis, the play centers on unexpected bonding between Ralph and Chamuel after Ralph picks up his son from the police station for breaking and entering into a home in a “better” part of town. We learn that Ralph has been in prison for most of Chamuel’s life, and the weight of his absence in his son’s development hangs like a third being between them in the car. Hunter is a particularly strong actor, blending a brusque affection for his son and complicated guilt for his failure to be a presence in his son’s life. The play takes more than one surprising twist as secrets are revealed about both father and son, and the ties that bind them.

Nate Shelton directs the play to maximize emotional effect through an interesting use of spartan design and a third character, Coach Ury (Mericus Adams) narrating stage directions for most of the play. Through this direction, we are made to focus on the rawness of the words and pain between these two, while letting our imagination carry us through the long drive home with them.

Paige Reynolds and Fallon Williams round out the creative team, as Producer and Stage Manager, respectively. The show isn’t perfect: one of the twists may be one twist too many. The writing in the first half is particularly strong, seeming unafraid of tackling big social and racial challenges. The second half explodes, but drops the focus of the first half. Come see this interesting production for yourself.