Comedy Hour at the Argonaut was nearly cut short, due to a block-long power outage. Folks lined up early on H Street, awaiting Krish Mohan and his FRINGE presentation when staffers invited guests to the rear patio – quickly assembling a makeshift performance space with stackable chairs and boisterous roadside commotion. Mohan was not equipped with a microphone, nor was he able to utilize pre-planned show projections, yet the funnyman showed seasoned professionalism in An Indian Comedian: How Not To Fit In. 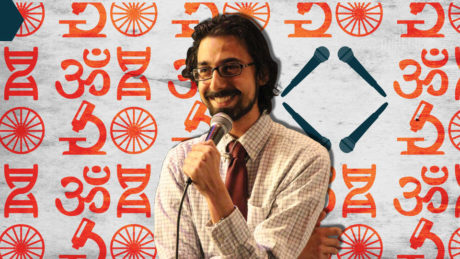 Laughter doesn’t come naturally to audiences when they’re forced to sit in the sticky humidity of 92 degree sunshine. An additional barrier to jump over, Mohan combats the elemental influences crisply, presenting a set list that includes humorous personal stories of racial questioning, Indian, sexual prowess, and cross-international bigots. The ‘touchy’ subjects are addressed with a personal approach from lifelong experience – the show could’ve been aptly named, “How I Dealt with Idiotic Americans.” Opposed to foreign nations, Mohan criticizes the lack of originality in modern, western-world racism, “Those Spanish soccer fans are throwing bananas at the opposing black players. Those are some prehistoric levels of bigotry, right there!”… He continued by condemning the cliché white-populous assumption that all Indian people smell like curry.

Two-thirds had passed in ‘Comedian’ when a drunken woman interrupted Mohan in the middle of his good cop vs. bad cop, shtick. He had not meant to push any buttons leading to personal offense, when this woman abruptly called attention to herself, speaking in agreement with the comedian’s personal stances on protecting the lives of black youth. Based on the delivered material, this was a less-than humorous moment of the show to begin with (more of a populous standpoint on gun safety), so the obnoxious personality from the performance’s uninvited guest did little to effect the momentum of Mohan’s creation. She left, the show continued, and An Indian Comedian: How Not To Fit In steadily concluded after an hour of sweat, chuckles, and beer.