The title tells you all you need to know about Chris Davis’ new show at the Fringe Festival. When you enter the performance space – a small room inside a Southwest Philly warehouse that’s seen better days – Davis is lying on his back on a mattress, the same way Martin Sheen did in the opening scene of Francis Ford Coppola’s 1979 Vietnam epic. “The End” by The Doors is playing, just like it did in that scene. Soon we hear Sheen’s monologue from that scene, and Davis begins lip-syncing it.

And with that, we’re off and running for a show that, thanks to its star’s deadpan determination, Chris Davis keeps its comic premise going strong for a full hour. Davis throws himself into the role with abandon; at one point he plays a female stripper and does a shimmy that, for better or worse, you won’t be able to get out of your head for a while.

One-Man Apocalypse Now not only allows Davis to act out the film’s story, it also allows him to comment on the film and its stars (“I’m now Dennis Hopper and I’m a complete and utter maniac”). He offers meta-jokes about the show itself and the Fringe Festival; there’s even a series of very funny references to a well-known Philadelphia actor. 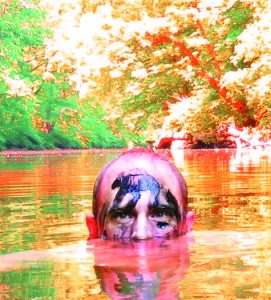 One word of caution: One-Man Apocalypse Now is performed in a building that apparently does not have working air conditioning – even though a huge industrial air conditioner and duct hangs overhead during the performance. But the stifling heat and humidity just add to the jungle-like atmosphere that the show aims to recreate. (Davis uses a room fan to cool the room; however, halfway through the performance I attended, he was changing clothes and accidentally threw a discarded piece of clothing into the blade, jamming it. The rest of the show was even hotter than usual.)

Then again, you may be laughing too hard to care.

One-Man Apocalypse Now runs through September 24, 2016 at The Philadelphia Fringe Festival performing at Heart of Darkness Warehouse – 5213 Grays Ave in Philadelphia, PA. For tickets, call the box office at (215) 413 1318, or purchase them online.

BEST OF THE 2016 PHILADELPHIA FRINGE!