“Perdono no merita chi agli altri non da.” So say the words carved into the wall above the stage in the Washington National Opera’s stunning production of The Marriage of Figaro (Le Nozze de Figaro) at the Kennedy Center: “Those who do not forgive do not deserve forgiveness.” And indeed, Le Nozze is all about forgiveness—as well as deception, betrayal, hypocrisy, and a fair bit of cross-dressing. And once the characters have done all that, the cycle starts anew. In this zany production, Director Peter Kazaras has brought new life to one of Mozart’s most frequently performed operas.

From the first triumphant swells of an overture famous in its own right, before the curtain even opens, Conductor James Gaffigan and the Washington National Opera (WNO) make it clear that we are in for a musical treat. The curtain then opens to reveal Figaro and his betrothed, Susanna, who are making preparations for their upcoming nuptials: she trying on her veil and he measuring a space for the bridal bed. But their plans are soon cast in doubt as we learn that the Count, performed by baritone Joshua Hopkins, has lecherous designs on Figaro’s bride-to-be—even though the Count has recently abolished the “first night” law that would permit him to do so.

Dr. Bartolo, portrayed with vim and vigor by Valerio Lanchas, and Marcellina (Elizabeth Bishop) are only too happy to get in the way of Figaro’s happiness, hatching a plot to prevent the marriage in the aria “La Vendetta” (“Vengeance”). Poor Countess Rosina, whose fragility and deep sadness are brought out in a stunning performance by Amanda Majeski, is caught in the middle. What follows is a series of plots and mishaps that keeps this story twisting and turning until the characters’ complicated designs can be untangled.

Ryan McKinny’s Figaro navigates quick thinking in comically compromising situations, duets with his love Susanna, and his rage-filled aria about unfaithful women, his resonant bass-baritone carrying us through Mozart’s timeless work. His sensible and honest nature sets him at odds with the Count, whose passions and jealousies fairly erupt out of Joshua Hopkins.

But it is the women who are truly at the heart of this production: Lisette Oropesa’s quick-thinking, loyal Susanna steals the show, aided by the heartsick Countess, in her efforts to maneuver through a world ruled by the passions and suspicions of men. When these two women take the stage together, audiences cannot fail to be moved, as during the famous duettino “Sull’aria…che soave zeffiretto.”

“Spoiler alert: no one dies in The Marriage of Figaro,” as the program declares. Lest there be any remaining doubt that this is a comedy, Figaro’s trial over debts lasts a few minutes, while there are several arias dedicated to the question of who is hiding in the closet.

The WNO’s ensemble brings the comedy of this opera to fruition: with impish Cherubino (Aleksandra Romano), prone to falling in love with any woman he happens across; Ariana Wehr’s saucy Barbarina; her uncle Antonio (Timothy J. Bruno), who always seems to appear at the wrong moment; slimy Don Basilio (Keith Jameson); and Don Curzio (Rexford Tester), who presides over the trial.

Set Designer Benoit Dugardyn has given us a stage that looks like a Vermeer painting, with its black-and-white tiled floors and blue draperies, and Neoclassical marble columns that morph with ease into a hallway, a lady’s bedchamber, or a night garden. The set works in tandem with Mark McCullough’s lighting design, which creates images such as a starry night for lovers, or an ominous gray backdrop for the Count’s fury.

Costume Designer Myung Hee Choo’s vibrant colors work well against the pale colors of the set, bringing splashes of pink (for the delicate countess) or bold oranges and greens (for Susanna and Figaro) to the stage.

With outstanding work by the performers and musicians alike, Washington National Opera’s The Marriage of Figaro makes for a night that is nothing short of delightful. With artists such as these, it is easy to remember why this opera has stood the test of time.

Running Time: Two hours and 45 minutes and a 25-minute intermission. 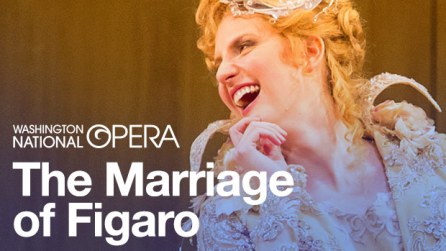 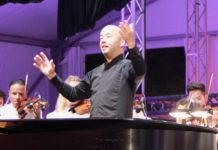