A huge profusion of classical trios, quartets and quintets is now hunting for audiences around the country. I’ll bet all of them would kill to get on one concert series in particular, and I don’t mean any of several fine series right here in Washington. Rather, I’m referring to the plainly named but impressively produced Tuesday Evening Concert Series at the University of Virginia’s historic Cabell Hall in Charlottesville, 120 miles southwest of the nation’s capital.

Based on the first two concerts in the 2016-2017 season, each event in the Tuesday Evening Concert Series features full houses, live acoustics, varied programs, passionate performances and – imagine this on the classical circuit – a lot of laughter and fun. 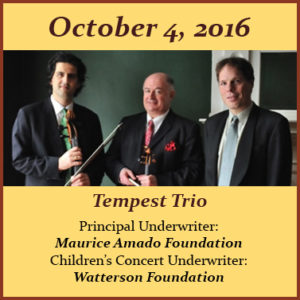 Only internationally seasoned performers with real artistic and stage presence need apply. The series opened on October 4th with the Tempest Trio, which combines two busy and engaging mid-career professionals based in our region – Baltimore-based cellist Amit Peled and Rockville-based pianist Alon Goldstein, both of them native Israelis – with veteran international violinist Ilya Kaler, who has taught at several of the world’s leading conservatories. 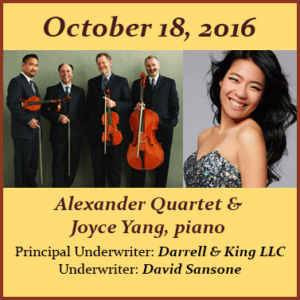 The series continued on October 18th with the San Francisco-based Alexander Quartet, who periodically combine with 2005 Van Cliburn Piano Competition silver medalist Joyce Yang to create a “piano quintet.” That’s a term of art that signals one piano, two violins, one viola and one cello, and “the Alexander plus Joyce” combo went all in, presenting in one evening the celebrated piano quintets of Robert Schumann, Johannes Brahms, and Dmitri Shostakovich.

The audience experience for these concerts is no cookie-cutter recital sit-through. Cabell Hall’s three-quarters-in-the-round auditorium gives each seat a unique vantage point and also presumably makes it more difficult to put the entire audience in blackout, so the concert organizers don’t bother to lower the lights all that much. If the inability to just hide in the dark is what almost completely eliminated audience coughing in these two concerts during the music – reminiscent of the taut, excellent atmosphere at the Phillips Collection’s Sunday afternoon concerts in D.C. – then maybe everybody should do this.

In the season opener, the Tempest Trio displayed a distinctive, bottom-up sound that integrates trio music from inspired composers across the centuries in a way that eludes many other ensembles. The cliché about chamber music is that it constitutes an “intelligent conversation” among instruments, but there’s no question that the sound of the Tempest specifically wells up from cellist Amit Peled’s huge sonorities. Riding above Mr. Peled’s lines, violinist Ilya Kaler produces an effortless-sounding vibrancy of tone with dead-center intonation on every note. That’s something younger violinists in trios and quartets often sacrifice in their over-interpretation of the music’s “meaning” with some rather violent sawing away at their fiddles.

For his part, Mr. Goldstein at the piano avoids a jumble effect often heard in piano trios where pianistically busy passage-work takes over and makes the trio sound like a piano concerto where the composer forgot to write an accompaniment for more than two other instruments. At Cabell Hall, Mr. Goldstein typically held the dynamics in check through the beginning and middle of key passages, while often still taking them at fleet rates of speed that lent propulsion and excitement to the collective effort. That was especially true in the Tempest’s performance of Antonin Dvorak’s Piano Trio No. 2, whose scherzo movement features a repeated sequence of five-bar rather than four-bar phrases that gives the music an entertainingly off-kilter drive.

The trio also performed Beethoven’s Ghost Trio, a challenging work that features an eerie and brooding middle movement that may or may not, depending on who you believe, have been a trial run at musically depicting the witches or “weird sisters” in Shakespeare’s Macbeth, which Beethoven wanted to turn into an opera but never did. Some trios play the middle movement deathly slow as if tempo alone will get the message across (personally I wasn’t aware that ghosts only move slowly, although I’ll report back after Halloween). The Tempest Trio chose intensity rather than a creeping tempo, which enabled more integration of the middle movement into the entire piece, with a genuine release into the peppy third movement. The Tempest added a novelty item, a performance of a little-known trio by Leonard Bernstein, which was actually a student piece of his at Harvard and has kind of a “kitchen sink” feel to it, with the budding composer jumping from style to style.

A different vibe emerged in the concert with the Alexander Quartet and Joyce Yang. The quintet of musicians produced almost a symphonic effect, with two key factors working in conjunction to produce a considerable “surround” of sound. One is that Cabell Hall offers quite spacious acoustics without undue reverb, although I understand that this requires some getting used to by the musicians on stage if most of their gigs are in drier halls.

The other factor is the effective way the members of the Alexander Quartet calibrate their relative volumes. Especially in the 19th-century Schumann and Brahms quintets from the “Romantic” era, second violinist Frederick Lifsitz kept his dynamics at about 80% of first violinist Zakarias Grafilo, and seemed to consistently coordinate with violist Paul Yarbrough to make a warm but clearly “interior” sound around which Mr. Grafilo and cellist Sandy Wilson could produce a bigger envelope. This proportionality combined with the acoustics also avoided the “every man for himself” effect often heard in chamber music. Ms. Yang’s well-honed combination of a lyrical, not overly percussive piano sound despite pristine, note-for-note technique also folded itself into the quintet music in unusually winning fashion.

A highlight was the popular scherzo of the Schumann quintet, which the full quintet took a tick faster than I’d heard it elsewhere, creating quite a set of rapid runs for Ms. Yang at the piano. When the concert was over, Mr. Lifsitz joked to the audience that he was going to surprise Joyce by announcing an encore of the Schumann scherzo played faster still. Of course she and the quartet tossed it off, all of them including Ms. Yang with smiles on their faces as they raced through the piece to the delight of the Cabell Hall audience.

The group approached the five-movement Shostakovich quintet, which is somewhat more accessible than some of Shostakovich’s very dark, quasi-dissonant and sometimes obsessively hair-raising compositions, in a somewhat different, more fully equalized way. That made sense since this 1940 composition frequently rotates motives around to two or three instruments at a time while holding the full quintet at bay until later.

At the earlier Tempest Trio concert, the musicians also laid on the humor, just as in their solo concerts in the Washington area where both Mr. Peled and Mr. Goldstein like to throw in some wisecracks. Mr. Peled told a story about how the trio originally recorded two other Dvorak pieces on the Naxos label under a sort of musician-funded vanity model, but for the trio’s next Dvorak disk he employed “Israeli chutzpah” to ask for (and apparently get) a better deal. Mr. Goldstein momentarily feigned insult at not being asked audience questions about the provenance of his instrument the way Mr. Kaler spoke about his violin and Mr. Peled his cello. Of course no one was under the impression that Mr. Goldstein brought the Cabell Hall Steinway grand in or out of the building!

We’ll see what other lively personalities bring to the table during the rest of the season, with one highlight being the arrival in Charlottesville of young violin superstar Nicola Benedetti with the Venice Baroque Orchestra on Valentine’s Day, in a concert that sounds awfully Italian although Ms. Benedetti is actually Scottish.

Even Tuesday Evening Concert Series Executive Director Karen Pellón was part of the act right at the top of the Tempest Trio concert, making light of a program typo that rendered one of the Dvorak movements as “Allegro non taco” rather than Allegro non troppo, claiming that autocorrect was at fault. Naturally that put me in mind of a 2012 report by a college English professor who related that some of his composition students thought that 17th century German master Johann Pachelbel had written not Pachelbel’s Canon but Taco Bell’s Canon. Who says classical music doesn’t put a smile on your face? 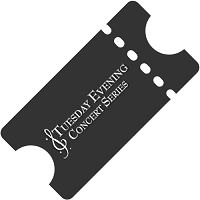 The Tempest Trio performed on Tuesday, October 4, 2016 at 7:30 p.m. in the Tuesday Evening Concert Series in the Cabell Hall Auditorium at the University of Virginia in Charlottesville, VA.

The Alexander Quartet and Pianist Joyce Yang performed in the same series on Tuesday, October 18, 2016 at 7:30 p.m.

For information on the five remaining concerts in the series during the 2016-2017 season, see the Tuesday Evening Concert Series season schedule.