After a five-year hiatus Open Circle Theatre (OCT) makes a triumphant return with an incredible production of The Who’s Tommy at Silver Spring Black Box Theatre. 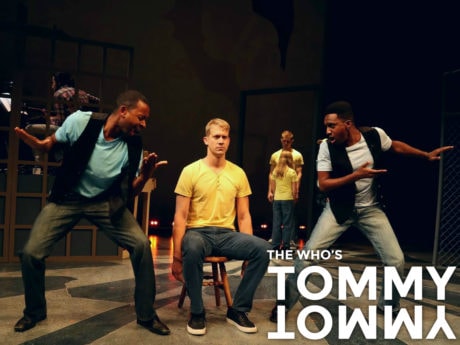 Written by Pete Townshend and Des McAnuff and based on the The Who’s 1969 rock opera, Tommy, the story of a traumatized and subsequently disabled boy becoming a pinball sensation struck Director Suzanne Richard as an opportunity to fulfill her vision of bringing the experience of disability to life. The result is a rockingly excellent production featuring a gifted cast lead by Russell Harvard.

Fans may remember the actor from his roles in There Will Be Blood and Fargo. He most recently appeared on the Broadway stage in Deaf West Theatre’s production of Spring Awakening which received three Tony Award nominations, including Best Revival of a Musical. Harvard’s Tommy is both innocent and defiant, at times quiet and other times bursting with electricity — and made even better by the immense talents of Will Hayes, who portrays the narrator and provides Tommy with his Voice.

Hayes is a gifted singer whose plaintive calls to “See Me, Feel Me” got this reviewer a little choked up. His interactions with the rest of the cast act as a bridge between Harvard’s Tommy and the rest of the world, interpreting Tommy’s experiences and effectively conveying to audiences what it means to live with a disability.

This message is strong during the first act, as Harvard and Hayes work alongside siblings Kira and Chloe Mitchiner to tell the story of Tommy’s traumatic and violent childhood. The sisters do a great job in their theatrical debut as Young Tommy at ages four and ten, respectively. Their faces powerfully convey the isolation Young Tommy experiences amid so much chaos. Richard deftly has these four actors, along with JP Illarramendi and Michelle Mary Schaefer, seamlessly work alongside one another to convey Tommy’s reality.

Schaefer, as The Girl in the Mirror, is a beautiful performer. Her face, her movements, her choices – so moving. Her counterpart Illarramendi also delivers a standout performance as part of the ensemble. He plays a physical embodiment of the mirror that holds Schaefer and Hayes’ characters, and is always there at key moments, skillfully acting as support to the rest of the cast.

Another breakout performer is Autumn Seavey Hicks as Mrs. Walker, Tommy’s mother. She and Malcolm Lee as Tommy’s father have some great exchanges together. Vocally Seavey Hicks has one of the best voices “The Acid Queen,” featured the terrific ‘belting’ of Maggie Leigh Walker while Dancing. And wearing a CORSET. In HEELS. I’m bowing down to that level of professionalism. Her version of this iconic song was fantastic and she never once let any issues with the mic break her vow to “tear your soul apart.”

Carl Williams and Aarron Loggins, who together play the character of the bully Cousin Kevin work together perfectly. Williams’ vocals frequently shine throughout the production and his performance is well-matched by Loggins, who provides striking movement to the character. Just like his counterpart Loggins often stands out in a cast that can be easy to get lost in, given its size and level of talent.

D’Arcee Charington Neal has some great moments as the Minister/Mr. Simpson. Edward C. Nagel has one of the strongest voices as the The Lover/Hawker, Molly Janiga makes a plucky Sally Simpson and Mikey Cafarelli is a wonderfully gross and creepy Uncle Ernie.

Amy Maniscalco, Rachel Barlaam, Jackie Madejski, Jose Martinez, Elver Ariza-Silva, Christian Kelly, Tina Ghandchilar, Joey Antonio, and Lynley Peoples were infectious as part of the talented ensemble, especially Monica Lijewski, whose incredible voice always rang out above the others, and Jen Bevan who doubled as choreographer and did so brilliantly. A special mention has to go to Eric Teran – the Gallaudet University student is making his production debut and he is a total scene-stealer, bravo!

The place was rocking thanks to the talents of Jake Null and his Assistant Music Director Deborah Jacobson on keyboards, Jason Wilson on bass, Jaime Ibacache and Brad Emmett on guitar and David Lu on drums.

Visually the show is beautiful, Arnulfo Moreno’s projections are well designed as is the lighting by Marianne Meadows. Jesse Shipley’s costumes are skillfully thought out and the on-set changes were well-choreographed by stage manager Jenny Rubin. Working with Richard, they’ve developed a cast that physically works really well together, and with the help of American Sign Language (ASL) masters Neil (Michael) Sprouse and Rita Corey gorgeously work ASL into the dialogue and movement.

Open Circle Theatre’s The Who’s Tommy and its super-talented cast are electric. Suzanne Richard and OTC have crafted a visually stunning production delivered in a rocking, rousing package.