Earlier this season, The Media Theatre presented Shakespeare’s classic Romeo & Juliet. Now they’re concluding their 2016-2017 season with a production of West Side Story, the musical that put a 20th Century spin on the Bard’s story and became a masterwork in its own right. Set in New York’s Upper West Side in the mid-1950s, West Side Story tells the story of two rival gangs, one all-white (the Jets) and the other all-Puerto Rican (the Sharks). The Jets are led by Riff, whose best friend, Tony (a former gang member), falls in love with Maria — the younger sister of Bernardo, the leader of the Sharks.

West Side Story had its Broadway premiere in 1957 under the direction of Jerome Robbins, who also choreographed. The musical was a game-changer due to the dark subjects (racial prejudice and urban violence) addressed in Arthur Laurents’ book; in addition, the sophistication of the Leonard Bernstein/Stephen Sondheim score and the extended dance scenes set it apart from the usual Broadway fare. It has become a classic of the American Musical canon and is continually produced throughout the world.

It is interesting to note that the area of Manhattan depicted in West Side Story had declined since the late 1940s, with businesses and residents that were financially able moving away, leaving the poor stranded and gangs running wild. Those still living there lost hope. The creators of West Side Story tapped into this mindset. In the early 1960s, a large portion of the neighborhood was demolished as part of an urban renewal project. Currently, the Lincoln Center complex occupies the bulk of this area; partly because of the Center’s presence, the area is now highly priced prime real estate. Times have changed, but the story set in that neighborhood remains timeless.

Dante Bratelli’s Chino is an admirable portrait of a boy becoming what he thinks is a man by killing his enemy. Victoria Guiteras Mayo is a powerhouse as Anita, creating a multi-faceted character and leading a rousing version of “America.” And the young lovers, Maria and Tony, are beautifully played by Patti-Lee Meringo and Grant Struble. Both have wonderful voices that blend nicely on duets like “Tonight” and “One Hand, One Heart,” and their acting was solid as well. Unfortunately, Ms. Meringo’s Hispanic accent disappeared during Maria’s pivotal speech in the final scene; hopefully that will change as the run proceeds.

West Side Story is a dance-heavy show, with several extended sequences; Dunn’s choreography wisely draws on Robbins’ iconic movement and is well-executed by the ensemble. Kyle Brylczyk’s set of brick tenements on either side of the stage and chain-link fencing angling upstage is adapted ever so slightly for different locations, but it restricts the playing area for numbers that use the full company onstage, such as “The Dance at the Gym.” Rear projections are used effectively to establish locales, though it’s a bit jarring to see the Brooklyn Bridge on the screen since it’s actually in a different area of Manhattan.

Steven Spera’s lighting is atmospheric, and Carl Park’s street noises add to the sense of place – but a number of opening night glitches (performers appearing in shadows, a sound balance that caused some singers to be drowned out by the orchestra) got in the way of their otherwise fine work. These problems will most likely be resolved by the end of the run. Jennifer Povish provides terrific costumes throughout, but when Tony gets out of Maria’s bed, he is wearing boxer briefs — even though they didn’t exist in 1957! (Traditional boxer shorts should have been used instead.) The devil is in the details, and an anachronism like that could have been avoided with just a little more dramaturgical work.

The 8-piece orchestra is spot-on, playing the well-known score with verve. Christopher Ertelt serves as Musical Director/Pianist/Conductor. The theatre uses a monitor at the back of the auditorium so that the performers can see him conducting, but the repeated flashing of the image from that TV screen became very distracting, both for me and for others in my row.

West Side Story is an American classic, presented with energy and passion by The Media Theatre’s talented ensemble. The vocal work is marvelous, with wonderful harmonies. The choreography is beautifully danced with great enthusiasm and style. It is an enjoyable evening of theatre.

Running Time: Two hours and 30 minutes, including a 15-minute intermission. 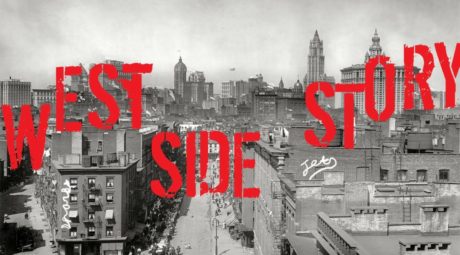