What’s so funny about suicide, cremation, drug addiction, PTSD, and familial dysfunction? Playwright Lauren Ferebee finds the dark comedy in all of that, along with the innate tragedy and irreality, the potential for change and the will to live, in Boomerang Theatre Company’s world premiere of The Reckless Season. Directed by Dominic D’Andrea, the play, now in a limited engagement at TheaterLab NYC, strikes a fine balance between laugh-out-loud absurdity and gut-wrenching human drama, as four young and troubled small-town southerners grapple with the big issues of life and death, loneliness, personal responsibility, and the hope of moving on to a better place.

Lisa and Terry are co-workers in a truck-stop convenience store in Brownwood, Texas, 2008. She and his estranged brother Simon, unknown to one another, both served in the US Army during the war in Iraq and aren’t dealing so well with the aftermath. She is pregnant and soon to be divorced from her unseen husband (also a veteran of Iraq struggling with the lingering trauma), while Simon has returned home to the news that his mother just killed herself, and to Terry’s immersive obsession with a video game that increasingly invades his grip on reality. Add to the that the local drug dealer Flynn, who has connections with all of them, and a running joke about all the cremated remains scattered in the Grand Canyon, and you get an outrageous mix of ridiculous and disastrous worst-case scenarios that forces them to re-examine their lives, who they are, and what they want to be, in the midst of their growing pains.

Under D’Andrea’s well-tempered direction, the excellent cast brings both humor and pathos to the characters, interweaving hilarious conversations (the line about seeing the face of Jesus in a tomato is especially witty) with desperate behavior and introspective soliloquies. Brian Morvant fully inhabits his role as the unsavory Flynn, capturing the jittery hopped-up mania of a meth-head and the self-deluding insistence that his drug-pushing is helping, not hurting, his buyers. Chase Burnett’s Simon exhibits the damage caused to his psyche by the war, a bad childhood, and a problematic relationship with his family, as he self-medicates with alcohol, drugs, and running away. By contrast, Trace Pope as Terry escapes by losing himself in violent video games, showing more concern for winning than he does for the realities of war or his mother’s death (“It’s ok, it was a suicide. She was unhappy,” he nonchalantly tells Lisa), as he resolves to preserve her ashes in a cardboard candy box from the truck stop because funerary urns are too expensive. Amanda Tudor as Lisa is smart and perceptive, direct in her comments and compassionate in her support, but waylaid in her dream of going to med school, and turning first to drugs, then to prayer, to help get her through her sadness (explaining with characteristic self-awareness and pragmatism that she’s “not serious” but “defeated; there’s a difference”).

The set by Scott Tedmon-Jones has the look of a modest home and a familiar gas-station convenience counter, then efficiently transitions to a white hospital waiting room and to the virtual reality of Terry’s mind, supported throughout by Steve Channon’s telling projections. Costumes by Viviane Galloway evoke the situations and positions of the characters, and lighting by Kia Roger creates the right emotional and psychological tones for the shifting scenes. Apropos sound by Andy Evan Cohen, including a background soundscape of country-western music, video game noises, and wartime gunshots and explosions, effectively augments the visuals.

Will these four lost souls on the cusp of adulthood remain “fucked up for life” or will they realize, in spite of all of the death and devastation they’ve faced in their youth, that life is still worth living? Find out in Boomerang’s entertaining and engaging new dramedy The Reckless Season, and be sure to keep an eye out for future work by these impressive young talents.

Running Time: Approximately one hour and 50 minutes, with an intermission. 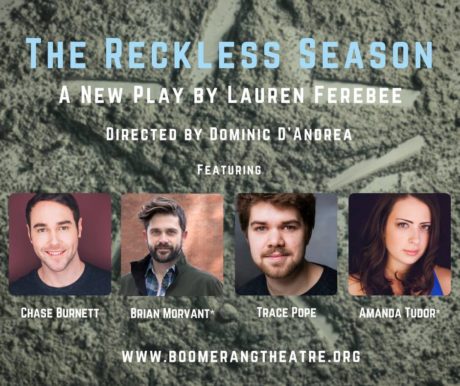