Drag queens save the day and light up the stage in Kinky Boots, making its return to Philadelphia for a limited run this week at the Academy of Music. Presented in the Broadway Philadelphia series by the Kimmel Center for the Performing Arts and The Shubert Organization, the national tour of the 2013 Tony Award-winning hit by Harvey Fierstein (book) and Cyndi Lauper (music and lyrics) is filled with high heels, high kicks, high energy, and high camp. It also takes the moral high ground in its affirmative message of perseverance and acceptance, of being true to oneself and living out loud, and of finding the common ground, universal experiences, and empathy we all need to bring us together despite our outward differences.

Based on the 2005 Miramax film of the same name (written by Geoff Deane and Tim Firth) and inspired by real events, the uplifting story is set in the declining English industrial town of Northampton, where Charlie Price, who had just made the move to London with his ambitious fiancée Nicola, inherits his family-owned business back home – a men’s high-end hand-made dress-shoe factory founded in 1890. Faced with overstocked items, decreasing sales, and a mounting debt that could result in lay-offs and closure, Charlie must come up with a new plan to appeal to a contemporary clientele. Enter Lola, a feisty drag queen in need of a sturdier heel for her fabulous footwear, and through their unlikely partnership, an in-vogue product line for a new niche market rescues the failing Price & Son, affords the revamped manufacturer international acclaim on the high-fashion runways of Milan, and unites everyone in their shared passion and ultimate compassion.

Following Jerry Mitchell’s original direction and choreography – recreated for the touring production by DB Bonds and Rusty Mowery – the vivacious cast (though at times inconsistent with its British accents) conveys the vitality and panache of the characters in scenes of confrontation and accord, while bringing heartfelt spirit to Lauper’s emotive score (with music arrangement/orchestrations by Stephen Oremus, music supervision by Robert Sinha, and music direction by Kevin Casey). Lance Bordelon is convincingly conflicted as Charlie, who doesn’t really want to take over his father’s business, doesn’t really want to be a part of Nicola’s world in London, and doesn’t always know how to deal with his long-time workers or his newly-found partner (Bordelon’s solo on “Soul of a Man” is especially stirring). Jos N. Banks shines as Lola, capturing her indomitable spirit and fierce wit (if you want to know the difference between a transvestite and a drag queen, or what type of personality each color of the rainbow represents, Lola is more than happy to tell you) and hitting all the right notes with powerful vocals and spot-on moves, from the ebullient drag anthem “Land of Lola” (supported by Brandon Alberto, Eric Stanton Betts, Derek Brazeau, Tyler Jent, Tony Tillman, and Ernest Terrelle Williams as Lola’s terrific troupe of agile drag Angels) to the moving ballad “Hold Me in Your Heart” and the simpatico duet with Charlie on “Not My Father’s Son.”

Featured players Hayley Lampart as the demanding Nicola and Sydney Patrick as Charlie’s love-struck employee Lauren turn in stand-out performances among the supporting cast (Patrick’s “The History of Wrong Guys” is one the show’s funniest numbers). And the entire ensemble brings down the house with exuberant paeans to self-expression through shoes (“The Most Beautiful Thing in the World” and “Sex Is in the Heel”), insightful observations on “What a Woman Wants,” and rousing renditions of “Everybody Say Yeah” (while performing perfectly synchronized acrobatic choreography on a conveyor belt) and “Raise Up You/Just Be,” which closes the show on a joyous and harmonious high note.

Costumes by Gregg Barnes, hair design by Josh Marquette, and make-up by Brian Strumwasser create the requisite glitz, glam, and sparkle, as does Kenneth Posner’s expressive lighting design, which explodes with color when Lola and the Angels take the stage (though spotlights sometimes missed the mark in the current production’s opening-night execution – a distraction that should be remedied for subsequent performances).

Kinky Boots is an entertaining show with an elevating message about individuality and tolerance. The touring production is only in town for five more days, so put on your favorite shoes and head on over to the Academy of Music now, for a stiletto-heeled spectacle with a much-needed happy ending! 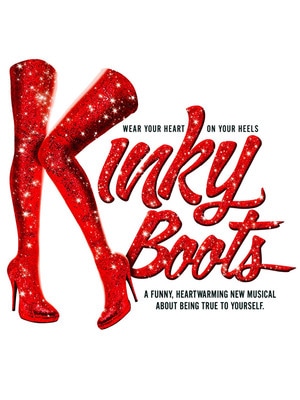