Hard to imagine a dramatic work more perfect for undergraduate actors or more pertinent to the racial tensions of our times than Dominique Morisseau’s trenchant Blood at the Root, now playing in a riveting production at Howard University. 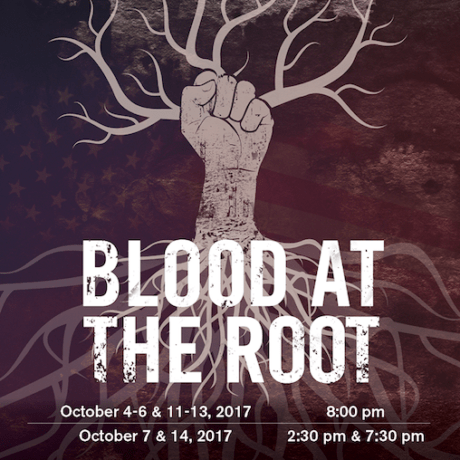 To put this play’s immediacy in context, racist hate speech in the form of so-called noose incidents has reared its ugly head in the capital area recently, including at colleges and the Smithsonian’s African-American history museum. In Blood at the Root, exactly such a bigoted act drives the action. The title comes from the protest song “Strange Fruit”—

—and in Morisseau’s play the title evokes the heavy weight of history that underlies each act of race hate today.

Morisseau’s script was written specifically for six M.F.A. acting students whom she worked with and got to know during a residence at Penn State School of Theatre. By happenstance, three of the actors were black and three were white.

In the news at the time was the story of the Jena Six. This was a case of six black teenagers who were convicted in the beating of a white student at a high school in Jena, Louisiana. There was a particular tree where only white students sat. The day after black students tried to sit there, nooses appeared in the tree. A schoolyard fight broke out. The six black students were charged with attempted murder. The injustice of that outcome troubled Morisseau, and as she talked about it with the acting students, she recognized the opportunity to build an important play around it.

Unusual for a work based on real events, one is never made aware that headlines preceded the play and “explain” what happens and why; rather, Morisseau’s drama arises plausibly and believably solely from her fictional characters and setting, a high school in Richmond, Virginia.

The distinctive features of Morisseau’s script are exceptionally well played in the Howard production. Notably, for instance, nearly all the two-character scenes are between a black student and a white student—as such they are bristling with issues—and each of the characters has at least one eye-opening monologue. There are also powerful passages in the form of a choreopoem played by all the actors at once. Morisseau’s writing is electrifying—as is evident in her Skeleton Crew, now running at Studio Theatre—and the Howard cast delivers it with compelling conviction: Adanna Paul (Raylynn), Austin T Farrow (Justin), Isaiah Reed (De’Andre), Kathryn Miller (Asha), Luke Risher (Colin), Nicole Vaughan (Toria), Shwneé Owens (Principal Miller).

Director Goldie Patrick has done an outstanding job of creating a credible sense of daily life at a high school, not only in casting the speaking roles but by incorporating an ensemble of nine who are not in the script (Brittaney Duhaney, Emmanual Key, Imani Branch, Kalen Robinson, Kasheem Fowler-Bryant, Olivia Dorsey, Paul Gatlin, Sophia Early, and Tyree Austin).  Vividly in characters they created, they stride across the stage between scenes as between classes and support the action in other important ways, as during a student protest demonstration and in movement by Choreographer Christopher Law. It’s impossible to imagine Morisseau’s play working as well without them.

As if to underscore how lines get drawn on the basis of race, Set Designer Michael Stephawany paints on the black floor a white Mondrian-like grid that is echoed on the upstage wall. A montage of speeded-up footage documenting America’s legacy of racism begins the show, with a mix featuring “Strange Fruit” by Sound Designer Cresent Haynes. Lighting Designer TW Starnes complements the staging’s urgent momentum. And Costume Supervisor Kendra Rai selects lots of shorts and shades of red to capture the sweltering October heat in the story.

Dominique Morisseau’s Blood at the Root is a breakthrough contribution to the conversation on race in America and a unique instance of how art can inspire young people to conscientious action against injustice. The production at Howard does Morisseau’s work all the justice it deserves and can be highly recommended.

Running Time: One hour 20 minutes, with no intermission.