Throughout December, visitors entering the Baltimore Center Stage lobby will immediately notice the strange goings-on and the Wonderland-like atmosphere bestowed upon the venue. Over to the left is the oversized red and white chess set, while on the ceiling above, an upside-down picnic – complete with blanket, basket, food, and wine – tempts. Various sections of the tile floor have been transformed: one area covered in a usable chalkboard, with another displaying digital surveillance images surrounded by an odd light show. 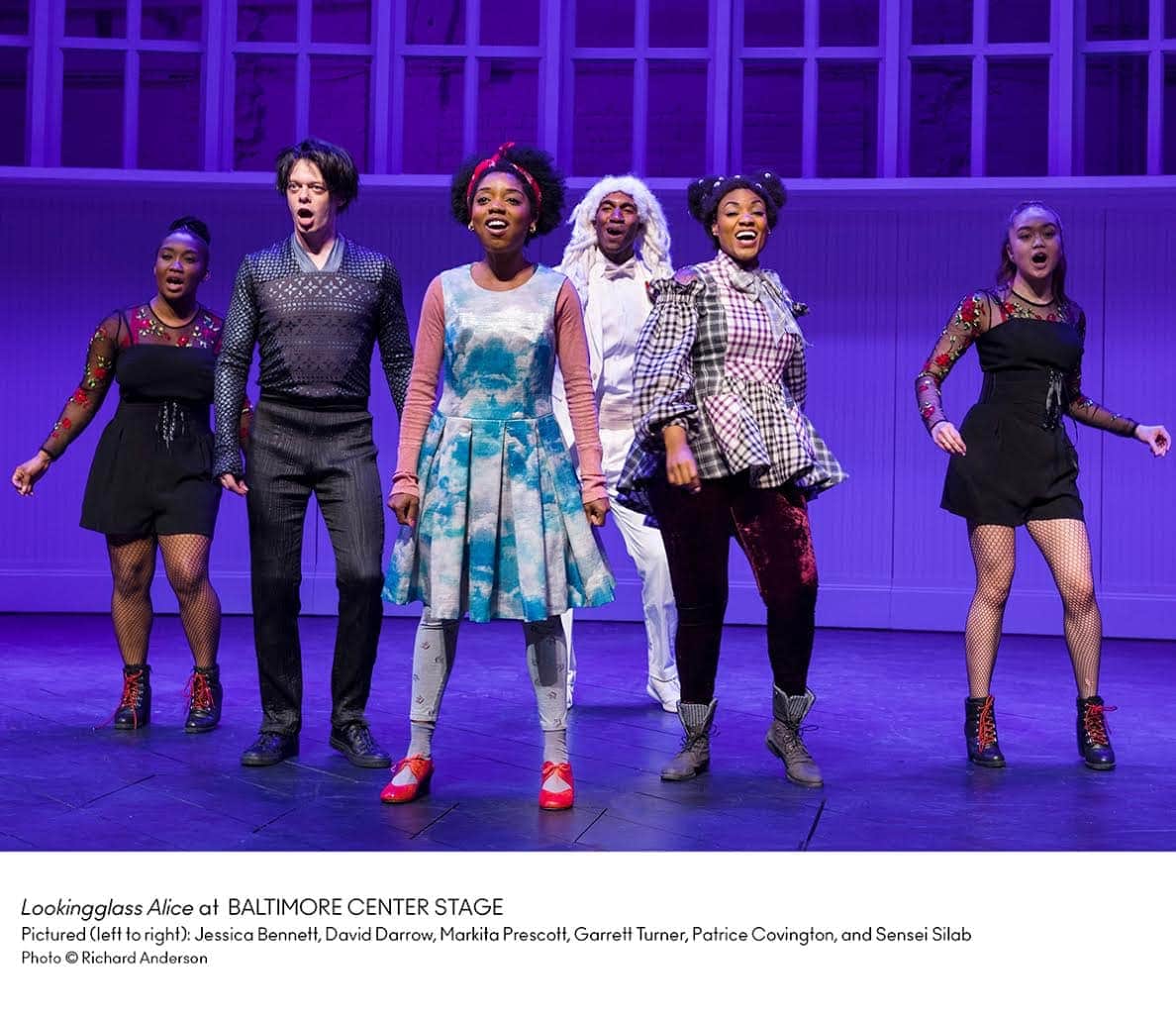 All of this sets the mood for the current production – Lookingglass Alice. Baltimore Center Stage has wisely chosen to present a non-traditional family offering this holiday season. In a time when the cultural zeitgeist has unofficially dubbed 2017 “the year of the woman,” this particular production choice shows that Baltimore Center Stage once again has its finger on the pulse of the city. Lookingglass Alice is a light-hearted feminist take on the Lewis Carroll classic (adapted by David Catlin) and this production is populated predominately by performers of color.

Right from the beginning, Markita Prescott has the audience in the palm of her hand.  She so skillfully embodies the soul and spirit of eleven-year-old Alice that it is easy to forget she is an actress roleplaying upon the stage. And then she opens her mouth to sing that first song and her crystalline vocals cast a spell over the room that remains for the rest of the evening. 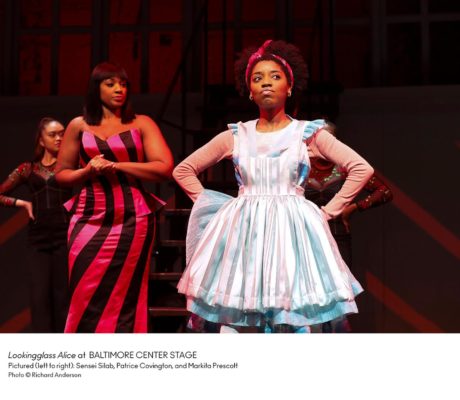 Lookingglass Alice is not a direct retelling of either Alice’s Adventures in Wonderland or Through the Looking-Glass, and What Alice Found There, but is instead a hybrid mixture of episodic vignettes from both those beloved Lewis Carroll novels, presented with a modern flair. All of your favorite characters make appearances.

Patrice Covington slays as the Red Queen. When she first appears at the top of a staircase to the stains of RuPaul’s “Call Me Mother,” there is no room for doubt – she is one fierce woman. All that is before she lets loose with her incredible vocal pyrotechnics on “Confident” (originally made popular by Demi Lovato). That musical number, buoyed by the backup dancing of Jessica Bennett and Sensei Silab, is one of the early highlights in the show.

Throughout, Christopher Ramirez morphs into several diverse personalities. He acts as our narrator, Mr. Dodgson (aka Lewis Carroll), the White Queen (with one of the funniest lines of the night), as well as a silly Tweedledum. 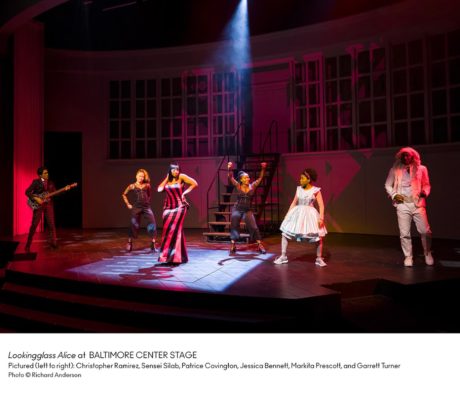 No Alice adaptation would be complete without a White Rabbit. In this version, he is brought to life with frantic energy by Garrett Turner. Turner also plays the slightly egotistical, but no less funny, White Knight; the Wicket during the Red Queen’s infamous croquet game; and the March Hare during the Mad Tea Party (the staging of which features tables, chairs and Covington’s Dormouse rising from an oversized picnic basket to the delight of the audience.)

The final on-stage performer in this Lookingglass Alice production is David Darrow. His Cheshire Cat is another highlight. Darrow performs other roles (Mad Hatter and Humpty Dumpty), but it is his contribution accompanying the musical numbers on various instruments (guitar, mandolin, etc.) that truly impresses. One of the best musical moments in the show is when Alice sings the Emeli Sandé classic, “Breathing Underwater,” and this has as much to do with Markita Prescott’s impressive rendition as it does with David Darrow’s acoustic accompaniment. Other cast members occasionally take on musical instrument duty as well.

As strong as these performers are, any production of David Catlin’s Lookingglass Alice would fail without a strong overarching vision. Jeremy B. Cohen, director, has a firm grasp of his intentions here: to tell a story about a young girl’s empowerment as she learns how to be a Queen in Wonderland or a confident young adult in the “real world.” As each new lesson teaches Alice something about society and herself, the costumes by David Burdick, document her ascension to enlightenment. The costumes for the other performers also have just the right mix of realism and whimsy. Scenic Designer Tim Mackabee, Projection Designer Caite Hevner, and Lighting Designer Rui Rita work seamlessly to delight the eyes of the audience. 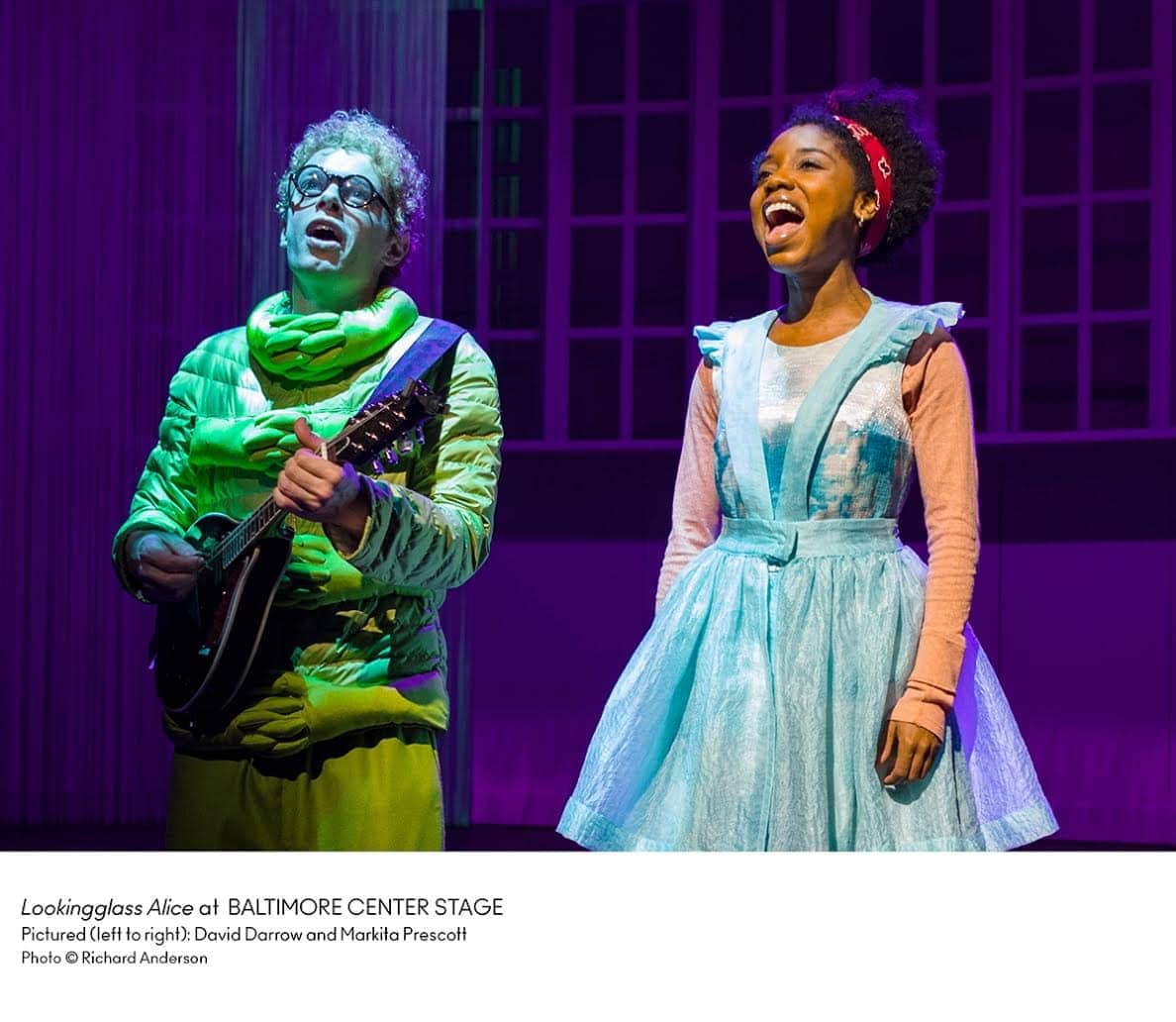 Lastly, we must single out the choreography of Rennie Harris. Harris is a legend in the street dance community and having his work represented on the boards of Baltimore Center Stage is a major coup. Harris evokes such organic movement from these performers that it is often impossible to tell what was a staged dance decision and what was just “normal” movement across the stage. Yet, at the same time, when the dancing really kicks in, the audience knows it and eats it up. This is an Alice for the hip-hop generation.

Lookingglass Alice as presented at Baltimore Center Stage is a delightful family musical with a message of empowerment and frivolity. The wordplay happening on that stage–much of if, if not all of it, directly from Lewis Carroll’s classic children’s book–pastes a smile a mile wide on every audience member. As Alice learns on her journey “Rule without play” makes for a dull existence, but finding the correct balance between the two makes the individual stronger by far.

Running Time: 80 minutes with no intermission.