Broadway fans are in for a treat as Matthew Morrison (Glee, The Light in the Piazza) and Shoshana Bean (Wicked, Waitress) will be headlining Strathmore’s Spring Gala Concert this weekend.

Morrison and Bean are no strangers to working together. Both cut their Broadway teeth in the original cast of Hairspray (2002). “There is great history between us,” Morrison said of Bean, “we really started our careers together and I’m excited to be onstage with her again.”

Morrison and Bean will each perform their own set at Strathmore, but the pair will perform a few songs together as well. Fans can expect a very Broadway-focused concert. “I’ll perform songs from my past albums and shows I’ve been in,” Morrison said. Shows that include TV’s Glee, Broadway’s Footloose, Hairspray, The Light in the Piazza, Finding Neverland, and more.

At heart, Morrison is a song and dance man. Dance is his great love and his classic moves often earn him comparison to Gene Kelly and Fred Astaire. “I like to show off a little bit in my concerts,” he said. “Rather than rely on background dancers, I like to do it all myself and really connect with the audience.”

Morrison credits meditation with keeping him grounded in the present and enabling him to improvise onstage. “I used to strive for the perfect performance,” he said. “Now I like to go off-script in my solo shows.”

Fatherhood has also taught Morrison, now 40, to live in the moment. Since his son Revel was born in 2017, Morrison has taken a step back from long-term projects. He took a full year off work after becoming a father and is now more selective in what he takes on. “The job has to be worth it,” he said of work that takes him away from family. “It’s funny because I used to think I didn’t have time for things and now that I’m a father I realize how much time I actually used to have!”

In that time, Morrison developed a solid career on Broadway and beyond. After making a splash as heartthrob Link Larkin in Hairspray, Morrison earned great acclaim – and a Tony nomination – for his portrayal of Fabrizio Naccarelli in Adam Guettel’s The Light in the Piazza (2005).

Morrison credits his experience in Piazza as the most fundamental to his growth as an artist. “It was one of those moments where you doubt yourself but come out stronger on the other side,” he said of the role that required him to sing opera and speak mostly in Italian. “There’s not much now that challenges me the way that did and I’m grateful for the experience.”

Morrison is equally grateful for the role that introduced him to audiences beyond Broadway: Teacher Will Schuester in Glee, which had a highly-successful six-year run on Fox from 2009 to 2015. “Glee opened up my career in a way I never thought possible,” he said. “Being known to a wider audience beyond Broadway has given me the ability to interact with diverse audiences and tailor my work to each opportunity.”

Following his concert at Strathmore, Morrison plans to take a cross-country road trip with his family before returning to a multitude of potential projects: an album, a TV show, a performance piece.

In life and onstage, Morisson is happy to be in the present and take things as they come. “It’s more exciting when you don’t have everything planned,” he said, “to live in those moments of awkwardness and insecurity.”

*Tickets begin at $38 and include a free afterparty. 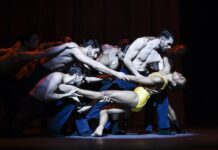