The School of Theatre, Dance, & Performance Studies (TDPS) and The Clarice at the University of Maryland, College Park will be premiering their main stage production of Flyin’ West by Pearl Cleage on November 1st through November 9th. Flyin’ West tells the story of four African-American women pioneers who have fled the brutality and oppression of the South and traveled West to Nicodemus, Kansas where they can be free and able to claim land for themselves. 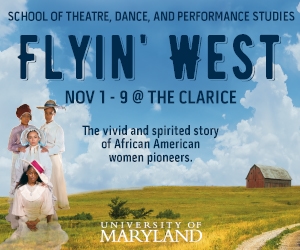 Set in 1898, Flyin’ West explores themes of racial pride, feminism, oral tradition, colorism, and domestic violence while emphasizing the resilience and sisterhood of black women through the leading female protagonists in the piece. This narrative of Flyin’ West will inform the audience of an overlooked period in American history where the fight for land ownership and freedom were of great importance to African-American people fleeing the South. Once an all-black settlement, Nicodemus marks a symbol in the African-American experience and still stands today as a National Historic Landmark. With scenic design by Jack Golden, audiences can expect to be immersed into this world through a lifelike farmhouse with an exposed interior set in front of a crisp Western plain.

This production is led by two distinguished faculty members in TDPS-Scot Reese and
Alvin Mayes. Newly inducted into the College of Fellows of the American Theatre, Reese has
received professional theatre credits ranging from New York to Los Angeles. An Emmy Award-winning artist as well as an educator and activist, Reese has dedicated his life to the arts and uplifting the theatre community, especially underrepresented groups. As the Head of Performance of TDPS, Reese has worked on a number of productions at The Clarice including The Heidi Chronicles which he directed this past spring. Head of Dance Performance and Scholarship, Alvin Mayes has been an educator and artist for many years. His work, which focuses on dance, theatre, and music as collaborative pieces, has taken him to Ecuador, Cuba, Japan, and Austria. Mayes’ areas of focus include partner work, choreography, and performance coaching for dance and movement. Reese and Mayes have been quite the dynamic duo within TDPS. They have co-directed on The Wild Party, The Me Nobody Knows, In the Red and Brown Water, The Colored Museum, and Sophisticated Ladies.
The cast comprises not only majors within TDPS, but non-majors who have an interest
in acting. Flyin’ West features Miranda Hall (Sophie Washington), Des’ree Brown/Gislaine Hoyah (Miss Leah), Gabrielle Allen (Fannie Dove), Elijah Williams (Will Parrish), Aaliyah Jackson (Minnie Dove Charles), and myself as Frank Charles. What makes this production so unique is that the cast is entirely made up young black women and men. While UMD is a predominately white institution, opportunities for students of color to have shows where they are represented must be acknowledged and valued.

Rehearsals began on Monday, September 23rd and the cast has been working diligently on
analyzing text, objectives/beats, physicality work, and character analysis in preparation for the show. Michal J., the shows fight choreographer, has been helping the cast with stage combat and handling weapons so that everyone involved in the process can feel comfortable and safe. Reese and Mayes have fostered an environment where the ensemble can collaborate as a community to bring this show to life. The student actors have been dedicating their time and energy to embodying this play and the complex characters created by Cleage to tell this story.

Flyin’ West will run from November 1st through November 9th with matinee and evening
showtimes available on The Clarice website.

The performance will be held in the Robert & Arlene Kogod Theatre, located in the Grand Pavilion of the Clarice Smith Performing Arts Center. Free parking is available in Lot 1B and Z after 4pm on weekdays and all-day Saturday and Sunday. Paid parking is available for $3 per hour in Stadium Drive Garage, located right across the street from the Clarice. Regular tickets can be purchased for $25 at the box office or online. While tickets are free for all UMD students, non-UMD student prices are discounted at $10. Feel free to follow the UMD TDPS Instagram (@umd_tdps) and Facebook (University of Maryland School of Theatre, Dance, and Performance Studies) for updates about shows and a behind-the-scenes look at current productions.

Flyin’ West plays from November 1 through 9, 2019 at the Clarice Smith Performing Arts Center at the University of Maryland. For more information or tickets, go online.