In his highly anticipated debut at The Green Room 42, Mexican composer, musician, and director Jaime Lozano brought together a blockbuster all-Latino line-up and band for a one-night-only concert of his original works and a launch party for his new album. The sold-out event, Jaime Lozano: Songs by an Immigrant, featured a set list of thirteen selections from his eponymous song cycle, favorites from past and upcoming shows Children of Salt, Present Perfect, and The Last Supper, and the just-released A Never-Ending Line (A Female Song Cycle) on Broadway Records, now available in stores and across digital platforms.

The stellar night was filled with powerhouse vocals on Lozano’s signature musical blend of Broadway-style ballads, modern jazz, and Latin rhythms, backed by a sizzling three-piece band of Rudyck Vidal Espinosa on bass, Joel E. Mateo on drums, and Lozano on piano and acoustic guitar. Numbers were interspersed with comments by the genial host, who introduced the stars and their backgrounds, provided information about the context of his meaningful songs, joked with the cast and audience in his always charming and exuberant style, and led an outpouring of mutual love, respect, and camaraderie both on stage and throughout the house.

Lozano’s frequent collaborator Javier Ignacio opened the show and set the stage with his impactful rendition of “The Generic Immigrant Welcome Song,” in which Noemi de la Puente’s acerbic lyrics serve as a clever indictment of those who make our country’s newest arrivals feel anything but welcome here. The theme of the struggles faced by Latin-American immigrants continued in Florencia Cuenca’s heartfelt delivery of “The Other Side” (lyrics by Neena Beber), considering the inhumanity of building a wall to separate us; beautiful tributes to South-American homelands in Ignacio’s wistful “Mi Perú” (lyrics by Nancy Cheser) and Migguel Anggelo’s new effulgent work “Venezuela” (which he wrote and delivered in Spanish); and Mauricio Martínez’s impassioned performances of “Enough Is Enough” (lyrics by Lauren Epsenhart) and “Dreamer” (lyrics by Jorge Castilla), which closed the evening with an affecting reminder that “dreamers belong here.” ¡Claro que sí!

In between were Aline Mayagoitia’s humorous warning of what she’d do “If You Break My Sister’s Heart” (lyrics by Lindsay Erin Anderson); a surprise powerhouse appearance by Elisa Galindez (a last-minute fill-in for the ailing Amy Lynn Hamlin) on “Mountain in the Sky” (lyrics by Marina Pires) that brought down the house; and Cuenca’s expressive “And the Years Go By” – all from A Never-Ending Line and a female-centric perspective. Rounding out the concert were Linedy Genao’s smooth jazz stylings on “Getting Up Is Easier” (also by Pires); Anggelo’s impressive range and spectacular high notes on “I’ll Start Again” (which he co-wrote with Lozano and Christina Quintana); Yvette Gonzalez-Nacer’s knock-out vocal on “Te Soñé” (with both the music and the Spanish lyrics by Lozano); and a red-hot duet by Martínez and Gonzalez-Nacer on “DJ, Can You Hear?” (lyrics by Nancy Cheser) that highlighted the strong and resonant voices, rich harmonies, and charismatic personalities of the outstanding well-paired Broadway luminaries.

If you couldn’t get tickets for Jaime Lozano: Songs by an Immigrant at The Green Room 42, you can listen to some of the entertaining and relevant songs on A Never-Ending Line (A Female Song Cycle), performed by an all-star all-female roster from on and off Broadway. Proceeds will benefit Maestra Music, a non-profit organization serving women in the musical theater industry. And you can look for future shows and concerts by the engaging Lozano and his terrific familia of talents on his website. 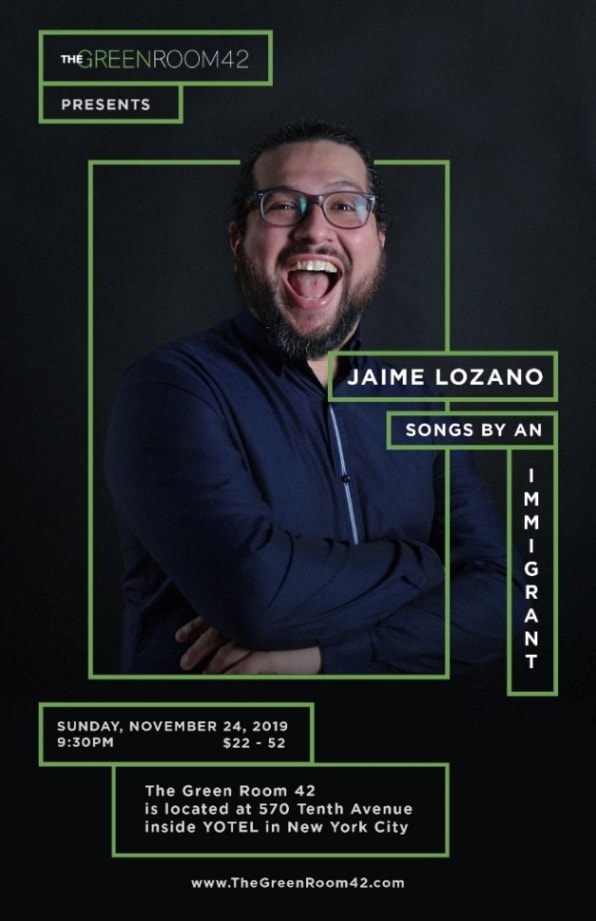