In the show, Page traces the evolution of Shakespeare’s most diabolical characters, through a series of monologues and scenes. Filmed under strict health and safety protocols onstage at Sidney Harman Hall by Joo Kno Media, All the Devils Are Here illustrates the growth of Shakespeare’s characters from stock archetypes to fully developed three-dimensional characters unlike anything that had come before.

Beloved on Broadway and in DC, Page has portrayed an astonishing array of bad guys. In 2019, Page was nominated for a Tony Award for his role as Hades in Hadestown. Other notable Broadway credits include Julius Caesar (with Denzel Washington), Saint Joan, Casa Valentina, Spring Awakening, Cyrano de Bergerac, The Lion King, and Dr. Seuss’ How the Grinch Stole Christmas: The Musical. At STC he received a Helen Hayes Award for his portrayal of Iago to Avery Brookss’ Othello, and has also starred as Claudius in Hamlet, Prospero in Tempest, and the lead roles in Macbeth and Coriolanus.

“Patrick understands Shakespeare’s works as only a seasoned actor can,” STC Artistic Director Simon Godwin shares. “Shakespeare was a playwright and an actor, and Patrick can get under the skin and into the minds of the most devilish creations ever to grace a stage.”

All the Devils Are Here: How Shakespeare Invented the Villain is available for viewing online beginning Thursday, February 4, 2021, at noon. Tickets are priced at $25 for this limited engagement and may be purchased here. (The streaming link is available for 72 hours after purchase. Please wait to purchase until ready to watch.) Running time: 80 minutes. 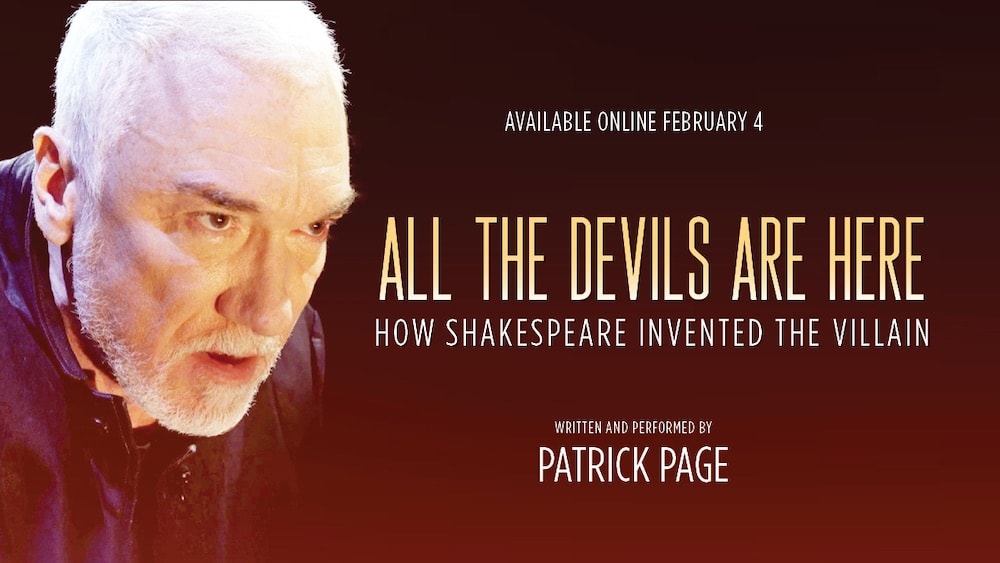 Recipient of the 2012 Regional Theatre Tony Award, STC’s mission is to create innovative productions that inspire dialogue and connect classic works to the modern human experience. The Company focuses on works with profound ideas, complex characters and poetic language written by Shakespeare and others—ambitious, enduring plays with universal themes—for all audiences. At this time of transition, the Company’s mission evolves with a three-year initiative to produce family-friendly theater during the holidays, and an expansion of the definition of “classic” to include playwrights previously excluded from the canon, with a renewed commitment to high-quality, exhilarating, inclusive theater.

A leader in arts education, STC has a dynamic range of initiatives that teach and excite learners of all ages, from school programs and adult acting classes to accessible community programming like play-relevant discussion series and the Free for All. For the past 27 years the Free For All program has offered an annual remount of a popular production completely free of charge to all audience members.

Located in downtown Washington, D.C., STC performs in two theater, the 451-seat Michael R. Klein Theatre at the Lansburgh and the 761-seat Sidney Harman Hall. In addition to STC productions appearing year-round, these spaces also accommodate presentations from outstanding local performing arts groups and nationally renowned organizations. The Company has been a fixture in the vibrant Penn Quarter neighborhood since 1992.