Eddie S. Glaude Jr., author of Begin Again: James Baldwin’s America and Its Urgent Lessons for Our Own (2020) and a Princeton professor, writes in The New Yorker about an encounter at a fundraiser between Dr. Martin Luther King Jr. and James Baldwin on March 16, 1968. Proceeds were meant to go to the Southern Christian Leadership Conference, as well as King’s newest project, the Poor People’s Campaign, which would feature a march on Washington. King’s adviser Bayard Rustin, among others, doubted the efficacy or desirability of tent cities or congressional sit-ins.

For his part, Baldwin had connections to the Civil Rights Movement’s more radical voices.

By the time of the fundraiser, the distance between the two men had been widened by Baldwin’s sympathies for the militancy of the younger generation… [J]ust a month earlier, Baldwin had hosted a birthday party and fund-raiser for Huey P. Newton, the jailed leader of the Black Panther party. In 1968, King felt intense pressure from such radical groups, and from recent shifts in the political climate. The nation had seemed to turn its back on his moral vision. Writing in The New York Review of Books, Andrew Kopkind, a white journalist of the New Left, declared that King had been “outstripped by his times.”

The Mountaintop by Katori Hall, presented by Rockville Little Theatre in partnership with the City of Gaithersburg (Arts on the Green), takes place a few weeks later, at the Lorraine Hotel in Memphis, Tennessee, the night before the assassination of Dr. Martin Luther King Jr. on April 4, 1968.

I was a teenager that year. MLK was assassinated a few weeks before my birthday. Robert Kennedy a few months after. I didn’t talk about it much with friends. It was hard to know what to say, except that it was terrible. My beliefs in human rights and feminism had led to support of the Civil Rights Movement. But I went to a private school, and there were no Black students. I don’t think I gave that fact much thought. It was simply, at the time, my reality. Are there excuses for my insensitivity? I don’t think so.

In The Mountaintop, Robert Freemon’s Dr. King is clearly exhausted and doubting his own mission. He’s in a small hotel room, with orange beds and spartan décor. He paces back and forth, trying out phrases for a speech and checking the phone for listening devices.

He is joined by the spirited and charming Camae (Zenia McPherson), a maid who brings him coffee and shares her Pall Malls. Both are charismatic, and both are on edge.

King flirts with Camae while reminding her to call his wife Mrs. King. At one point, he has a panic attack. Camae, who has some painful secrets of her own, repeatedly reminds King it is her first day on the job.

Camae turns out to be a fine preacher herself, and she echoes the beliefs of the younger generation. She gently mocks Dr. King’s ego although she clearly admires him and is flattered by their connection. King is aware of her as an attractive young woman, but never steps over the line.

Underlying everything is one powerful emotion: fear. Camae remarks that Black folks don’t want to go out because they are afraid of getting bombed. King refers to fear as “my companion, my lover, my best friend.”

The Mountaintop, beautifully produced and played, is as relevant today as Dr. King was in his own time. The disparate treatment given to Black Lives Matter protestors and the January 6 Capitol rioters is only one example.

Whatever you may think of Dr. King, he was a leader. And if there is one thing we have learned from the Trump years, it is that leadership matters.

The Mountaintop, presented by Arts on the Green in partnership with Rockville Little Theatre, performs live from February 19 to 28, 2021, Fridays and Saturdays at 8 pm and Sundays at 2 pm. Tickets are available online. Only one $20 purchase is needed per household. Recommended for ages 14 and up.

This livestreamed show is brought to you in partnership with Mandolin. Within one week before the show, you will receive an email from Mandolin with a link to the show and instructions on how to log in to the performance. For questions about streaming or to purchase tickets by phone, call 301-258-6394. 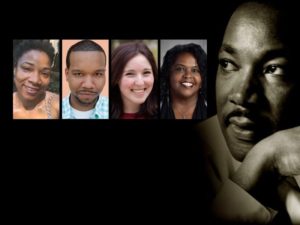 SEE ALSO: Four views from ‘The Mountaintop,’ streaming live from the Arts Barn