I have apparently been living under a rock for 44 years because until last weekend I had never seen The Mystery of Edwin Drood. The Workhouse Arts Center in Lorton is currently showing the madcap musical by Rupert Holmes (The “Pina Colada” song guy), inspired by Charles Dickens’ final unfinished work of the same name and by Victorian-style music hall performance.

The show opened on Broadway in 1986 and was revived in 2012, receiving Tony Awards and Drama Desk Awards for both runs. The show was the first on Broadway to have a “choose your own adventure” ending, with multiple options determined by votes from the audience.

The cast plays music hall actors performing The Mystery of Edwin Drood (announced in an extended spooky voice, with wavy hands). This show-within-the-show is full of fourth wall breaks and audience participation, and before it begins, the characters mill about the stage and interact with the entering crowd. The Chairman of the Music Hall, animatedly played by Brian Lyons-Burke, kicks off the performance leading the ensemble in “There You Are,” welcoming the audience to the Hall.

There are many interesting (and suspicious) characters but none more so than John Jasper (Bob Gudauskas), a duplicitous character who is secretly in love with his pupil Rosa Bud (Kaley Harman), the fiancée of his nephew Edwin Drood (Amanda Mason).

Jasper is a choral master by day and opium addict by night, very “Jekyll and Hyde,” singing about his failing grasp on sanity in “A Man Could Go Quite Mad.” He then quickly returns to calm with Edwin in “Two Kinsmen” as they boast of their wonderful kinship — only moments later to persuade Rosa Bud to reluctantly sing “Moonfall,” a song he has composed that blatantly hints at Jasper’s love and devotion to her.

But it gets even more complicated when the Reverend Crisparkle (Philip Krzywicki) shows up with two newly arrived guests from overseas, siblings Neville Landless (Shakil Azizi) and Helena Landless (Stephanie Chu Rudden). An obvious interest is sparked between Neville and Rosa, turning the love triangle into more of a square and cueing contention between Edwin, Jasper, and Neville.

Another notable character in question is opium den owner Princess Puffer (Jennifer Pagnard). Pagnard is delightfully and unapologetically crass. She sings about “The Wages of Sin,” reveling in her business of making money off of debauchery and drugs.

Meanwhile, Jasper has planned a holiday dinner party to honor his nephew and extend an olive branch to the Landless twins. But unbeknownst to him, Edwin and Rosa have confessed that they are not in love and intend to end their engagement, which was arranged when they were very young. They sing an exquisite duet, “Perfect Strangers,” agreeing to part as friends and keep their break secret so as not to ruin the dinner. Mason and Harmen’s voices blend beautifully and, while all of the music is lovely, this song was my favorite.

The dinner party does not go smoothly. The ensemble sings “No Good Can Come From Bad,” as there’s a secret romance, animosity reinvigorated, reputation challenged, and a violent storm that ultimately breaks up the whole party.

The next day, Edwin Drood is nowhere to be found. His torn coat is discovered, accusations are made, and everyone is a suspect — even the unassuming Bazzard (Aaron Talley), who sings the woeful “Never the Luck” and laments that he always receives small roles in the shows. Bazzard could have murdered Drood to give himself a more prominent role. Jasper or Neville could have murdered him out of jealousy for Rosa. And that is when the audience is called on. Voting takes place and the resolution varies based on how the tallies add up.

While the story sounds more dark and sinister than a comedy, it is the performances themselves that set the mood. The actors break character for applause. One actor doesn’t show up and the Chairman has to step up to cover the role, only to discover that he is in a scene with himself and has to play both roles with conflicting views. Another actor storms off the set in a tizzy. There is a palpable joy in the art itself and an appreciation of the process and talent required to pull a show off.

But as lighthearted as the whole experience is, the singing is no joke. Musical Director Paige Rammelkamp has done an incredible job with this body of music, which with its many layers of harmony and rounds borders on opera at times. And Director Danilo Stapula uses the black box theater to its maximum, creating a comfortable open space allowing for easy flow between scenes.

The show is music, mystery, comedy, madness all playfully and passionately molded into two and a half hours of giddy entertainment. I got teary-eyed a few times from laughing so hard. And if the cast wasn’t having the time of their lives, then they are the best actors in the world because the whole vibe of the show is pure silliness and pleasure from beginning to end.

There’s no life-learning, thought-provoking, controversial aspect. The Mystery Of Edwin Drood is unadulterated fun. The Workhouse Arts Center has created a production that offers pure feel-good escapism. Forget about the world for a few hours to simply laugh and be entertained. 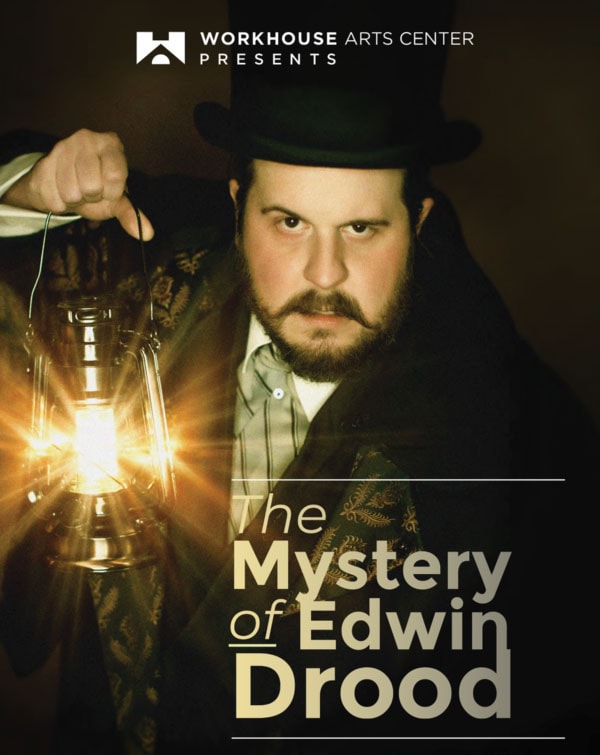 COVID Safety: All persons attending will be required to show proof of COVID vaccination or proof of a negative COVID test within 48 hours of event time, in order to be permitted entry to the venue. (A card, printed facsimile, or photo on mobile device will be acceptable). All Workhouse staff and performers are working under this same requirement. Masks are required unless eating or drinking.