Examining presence in a theatrical context is a provocative idea, and a challenging one. A performance gives presence to the narrative, characters, and ideas of a play. The theater gives presence to the artists and audiences that the company gathers together in the construction of a community. A performance and a theater make the lives, the values, the hopes and aspirations, and the people of that constructed community visible beyond themselves. That is presence in the theatrical context. Evaluating that presence requires the writer to research and analyze both the theatrical performances that engage the public and how that public responds to those products. The analysis also needs to consider the denotative aspects of the historical changes taking place in the theatrical geography as well as the connotative reverberations of those changes in the public affected by the theatrical project.

I kept these challenges in mind as I read Blair A. Ruble’s Proclaiming Presence from the Washington Stage. In the book, Ruble focuses primarily on the individuals responsible for four 20th-century Washington theaters: The Howard Players, Catholic University’s Hartke Players, Arena Stage, and The DC Black Repertory Company. He places those four theaters and their leaders within the frame of racial, confessional, regional, and community presences. Ruble does an excellent job laying out the history of those four enterprises, presenting their leadership with great acuity. His larger ambition, however, that of examining the presence that those enterprises proclaim to the public, falls short of the mark as Ruble fails to give sufficient import to the communities being engaged by the theaters and leaders within his study.

Founded in 1907, Howard University’s College Dramatic Club would later become The Howard Players. Performing in the Howard Theatre, the company gave presence to African American performers. More important, however, The Players gave birth to the idea “of native Negro drama,” a drama to be interpreted by African Americans themselves. Thomas Montgomery Gregory made the creation of a Negro National Theatre his mission when he became the chair of Howard University’s English Department. He would later be joined by philosopher Alain Locke and together they made great strides spreading this vision to Harlem and elsewhere.

One of the highlights of this section of the book was Ruble’s discussion of the plays of Willis Richardson. Although he turned down an opportunity to attend Howard University, electing instead to work his entire life for the U.S. Bureau of Engraving and Printing, his The Chip Woman’s Fortune became the first play by an African American to be performed on Broadway. Ironically, most of his 49 plays were performed by the Bureau’s drama club, while The Chip Woman’s Fortune was produced by the Chicago-based Ethiopian Art Players, founded by Raymond O’Neill.

For the Catholic presence, Ruble focuses almost exclusively on the work of Father Hartke, which is understandable, for his accomplishments influenced DC theater significantly for many decades. The book details Hartke’s tireless efforts to build a National Catholic Theatre. Although he failed at that endeavor, he did succeed at building what Ruble calls a “theatrical empire,” with its roots in the Drama Department at Catholic University but with its influence reverberating throughout the city, at Arena Stage, the Kennedy Center, and beyond.

During the 1940s and into the early 1950s, Catholic University’s Drama Department reached its zenith. Hartke accomplished this feat by blending academic and professional practices. He started Catholic’s graduate program in drama, bringing in theatrical heavyweights like Walter Kerr and Leo Brady. Most notably, fresh from graduating from Cornell University, Alan Schneider of Samuel Beckett fame joined the University faculty in the early 1940s. Although he directed many shows for the University, it was his 1952 production of Thornton Wilder’s The Skin of Our Teeth that achieved the most notoriety.

Founded in 1951, Arena Stage has long been a leader of the country’s nonprofit regional theater movement. Zelda and Thomas Fichandler and Edward Mangum had the original idea, with Mangum directing many of the company’s initial shows. When he left in 1952, none other than the aforementioned Alan Schneider replaced him as the company’s leading director. Ruble chronicles the Fichandlers tireless efforts to build Arena into the national institution that it now is, focusing prominently on its 1967 production of Howard Sackler’s The Great White Hope.

Ruble’s discussion of this production embodies the core challenge of this book. Theater’s unspoken mission is to give presence to its community. How any particular theater defines its community will determine the essence that its institutional identity gives presence to. The community that the Howard Players were performing for was clear: they produced African American plays for an African American audience, performed by African American artists. Hartke’s work, despite his efforts to integrate theater audiences, was also clear: he actively recruited predominantly white Catholic congregations to support and attend the productions. Arena Stage, on the other hand, faced a new DC. In 1950, DC’s population was over 65 percent white. By 1970, it was approximately 70 percent Black. The community that created and supported Arena mirrored that 1950s population. In 1967, that community no longer mirrored DC’s population; it was an image of an upper-class white privilege that existed in stark contrast to the growing rage of a city that would explode only a year later after the murder of Dr. Martin Luther King Jr.

Enter Robert Hooks and his quest to establish the DC Black Repertory Company (The Rep) and, thus, give Washington a theatrical presence to the African American experience. Ruble analyzes the theoretical tensions within the African American theater community, much of which centers on tensions between those who favored representational forms over more ritualistic, symbolic ones. That tension is only compounded when the question of audience is inserted: a Black theater for a Black audience versus a Black-inspired theater for integrated audiences. Hooks, who helped found the Negro Ensemble Company (1968), opened The Rep in October 1972 with an amateur production of works by Amiri Baraka (aka LeRoi Jones and Imamu Amear Baraka); its centerpiece was Baraka’s A Black Mass. Hooks had declared the theater’s mission: Black theater by local Black artists for a Black audience. Though reviews were mixed, audiences were not: they responded spontaneously to the performance of Baraka with affirmations and applause.

The company of DC-based performing artists who gathered together under The Rep’s tent was indeed impressive: Artistic Director Motojicho (Vantile Whitfield), Vocal Director Bernice Reagon, and Choreographers Louis Johnson and Mike Malone. Hooks allowed them to showcase their diverse range of talents, combining theatrical performances with performances of music and dance, and over the next three years produced a splendid array of productions, from Reagon’s musical pageant Upon this Rock to Jean Genet’s The Blacks, which was funded by The Kennedy Center and performed in its Eisenhower Theater. Despite these successes with audiences (not necessarily Washington Post critics), in December 1976 The Rep closed its doors and, with it, the African American presence that Hooks had struggled to realize.

I tell all the colored folks to listen to me
Don’t try to find you no home in Washington, DC
‘Cause it’s a bourgeois town

Indeed, and theater is, in the final analysis, a bourgeois art form, at least as it is currently practiced by professional theaters outside of churches, community centers, secondary schools, and the like. In Ruble’s discussion of identity, theater, and presence in Washington, DC, one of the wealthiest, lawyer-dense cities in the United States if not the world, the absence of class as an important intersectional component weakens his analysis, for it does not allow him to diagnose tensions between the community of people that a Gregory and a Fichandler and definitely a Hooks might want to address and the community of funders and supporters that the professional theater relies on for its survival.

Robert Michael Oliver’s 2005 University of Maryland doctoral dissertation is titled National Theater or Public Theater: The Transformation of the Theatrical Geography of Washington, D.C., Circa 1970-1990.

About Blair A. Ruble 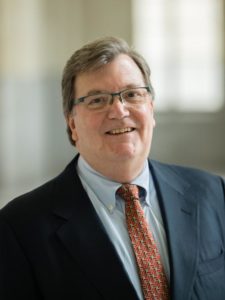 Blair A. Ruble is currently a Distinguished Fellow at the Woodrow Wilson International Center for Scholars. He previously served as Director of the Kennan Institute for Advanced Russian Studies (1989–2012) as well as of the Center’s Comparative Urban Studies Program (1992–2014), was Director of Program on Global Sustainability and Resilience (2012-2014), the Center’s Vice President for Programs, and Director of the Urban Policy Laboratory (2014–2017). Among his numerous publications is the trilogy Leningrad. Shaping a Soviet City (1990); Money Sings! The Changing Politics of Urban Space in Post-Soviet Yaroslavl (1995); and Second Metropolis: Pragmatic Pluralism in Gilded Age Chicago, Silver Age Moscow, and Meiji Osaka (2001). Other books include Creating Diversity Capital (2005), Soviet Trade Unions (2009), and Washington’s U Street: A Biography (2010). His most recent monograph, The Muse of Urban Delirium (2017), appeared with New Academia Publishing.

The Center for International Theatre Development presented this conversation about Proclaiming Presence from the Washington Stage on the HowlRound TV network on November 8, 2021.