If a picture’s worth a thousand words, then a single song contains worlds. Psalmayene 24’s astonishing Dear Mapel feels just like that. Psalmayene 24 plays himself as he relays his coming of age story, traveling through worlds of feeling, worlds in words, and worlds he’s lived: Park Slope, Howard University, a woman’s basement bedroom, a house in Queens in two different decades. It contains worlds of Blackness, masculinity, childhood, adolescence, sexuality. Absence, presence, change, and movement. In truth, we only get to see a sliver of Psalm’s world, but it’s a privilege that he’s decided to share with us.

Dear Mapel is structured as a series of letters to Psalm’s absent father, Mapel. It is inherently musical, as the dialogue is poetry, often set to the percussive rhythms of JabariDC (musician and various roles). But the form itself also feels like an album, or even one long song. Each story, each snapshot of life that Psalm shares builds on the next with interludes and reprises. Recurring themes are reflected in his words, or the lighting, or the musical pattern of JabariDC’s drums. It creates a picture that’s inseparable from the content, which itself is so interwoven and attached to its musical form, to the drums of West Africa, to hip hop. This musical, song-like form evokes, honestly and authentically, the abstract qualities shared by both dreams and memories. The structure of the show brings us into a world that is grounded equally in the reality of past experiences and dreams of connection, of closure.

The technical elements are instruments providing the backing track for the song-like qualities evoked by Dear Mapel. They feel familiar, even recognizable, yet create something slightly different each time they work together. Alberto Segarra’s beautiful lighting makes big changes subtly, fading in and out, helping the audience to recollect earlier moments in the show. Sound design (Nick “tha 1da” Hernandez) perfectly captures different eras of life, emphasizing new scenes, and sometimes a different Psalm, in each cue. There are projections (Kelly Colburn) that I did not have the privilege to see incorporated, due to some technical difficulties. Although the show did not feel empty without them, I do wish I could have seen the work that went in, and the sensory value they add. Finally, JabariDC brings humor and ease to the show, always the final piece of the puzzle that allows a word, emotion, or thought to rise to its fullest potential. His presence is versatile as he expertly punctuates with sadness, wisdom, laughter, and, most of all, percussion.

Psalmayene 24 leads this epic of a two-man production, encompassing actor, writer, visionary, dancer, and singer. But what is remarkable is that these roles are not used just as individual skillsets. Working together with Natsu Onoda Power (director and production designer), Psalm brings a storytelling through-line to each role, so that they weave together to create a basket that gently holds his experience, which he then holds up and generously offers to the audience. There is so much strength in this willingness to be vulnerable, and it helps each and every emotion Psalm conveys to strike a chord. The humor is real — vulnerable. The sadness, wistfulness, feeling of grieving things you’re not even sure of — vulnerable. Firsts, failures, tries — vulnerable. And that vulnerability creates a song of masculinity, Jamaicanness, Blackness, artistry, generational trauma, grief, honest connection, joy — all inseparable from one another.

It is through this lens of abundance that I see the remarkable song that is Dear Mapel. The play itself holds as many parts, as many stories, as Psalm does himself. It is grounded in contradictory ideas of presence and absence, as it is an act of unconditional love toward the missing Mapel, but an act of unconditional self-love as well. It is about community and individualism because it is Psalm’s self-expression, but it includes everyone in the room. It is a beautiful, multifaceted story of how to create closure, or even oneself, in the face of unaccepting circumstances and hegemonic white American forces. It is an individual story of creation, but Psalm weaves it into the lives of countless others, so that Dear Mapel becomes a personal anthem that is remembered and passed on. A legacy born out of absence, with a name it gave itself, ready to be sung again and again. 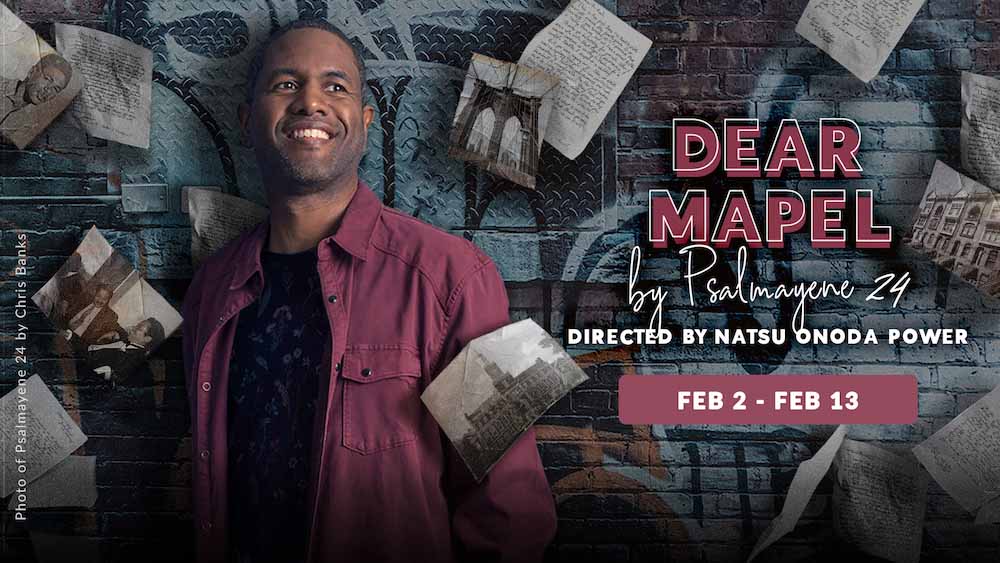 Dear Mapel — written and performed by Psalmayene 24, directed by Natsu Onoda Power, with percussion by JabariDC — runs in-person to February 13, 2022, presented by Mosaic Theater Company at the Atlas Performing Arts Center, H Street NE, Washington DC. Tickets for general admission are $50 each and can be purchased online or by calling 202-738-9491. Open-captioned performances are February 5 at 8 PM, February 10 at 11 AM, and February 10 at 8 PM (includes ASL postshow).

Dear Mapel also streams February 14 to 27, 2022. Tickets for the virtual option are $40 for individuals and $70 for groups, available online. Viewers have 72 hours in which to watch the performance. Closed captions are available.

SEE ALSO:
Psalmayene 24 on ‘Dear Mapel,’ his elegy for a father he hardly knew (interview by Ravelle Brickman)