GALA Hispanic Theatre has delivered the world premiere of La casa de la laguna (The House on the Lagoon), a play written for GALA by Caridad Svich based on the novel by the late Puerto Rican writer Rosario Ferré. It’s an important work on several levels, notably bringing to our attention the island of Puerto Rico and making us consider its complicated society and relationship to its “big brother” and colonizer — the United States.

Let’s face it, most Americans conveniently turn a blind eye to PR except as a midwinter escape unless there is a natural disaster, and then the media treats such occurrences as a photo op, some more jarring and embarrassing than others.

The work seeks to address American cluelessness by taking us inside Ferré’s themes of class, racism, and sexism that are woven into the island’s history. GALA and the creative team, including director Rebecca Aparicio, show us a heavily divided society, which has seemingly installed some of the worst tendencies of PR’s progenitors: from Spain its deeply rooted upper-class snobbism, conservative values, and, in particular, its machismo (now unmasked as toxic masculinity) and from America rapacious greed further destabilizing both environmental health and social equality and opportunity.

For this wide-ranging history lesson that takes us through three generations of a ruling-class family, Puerto Rican Scenic Designer Gerardo Díaz Sánchez created a sleek single set representing a modern deluxe home opening out to tropical gardens and a lagoon. The glass wall of vertical panels provides a surface for projections by Kelly Colburn that use video footage, scrawled dates, and announced time divisions to guide the audience through the complicated history. Jennifer Fok lights the stage world with touches of welcome imagination and color, and Germán Martínez’s sound design adds underscoring that highlights the multicultural sound worlds represented on the island, from Spanish classical guitar to Yoruba rhythmic percussion.

We follow this story mostly through the eyes of a woman, Isabel Montfort, as she first pursues her own dreams and choices (echoing Ferré’s own journey leaving the island to pursue a U.S. Ivy League education) only to return and find herself married into a ruling family, walled in and dominated by a violent, unstable patriarch in her father-in-law. How she falls into similar patterns of relationship is the most disturbing but important dramatic element of the play.

The acting is impeccable in the stellar cast, several from the island. Ernesto Concepción eats up space as the mature Quintín, delivering megaton dangerous power. (Think Al Pacino in Godfather with whom he shares leading man looks, roving stares, and restless gestures.) Coiled and intense, his rage builds then explodes in his character’s arc from young idealist to capitalist tyrant.

Yaiza Figueroa as the central figure of Isabel, Quintín’s wife, has crafted an indelible journey through three stages of a woman’s life, believable in each, transforming herself from a bright young girl full of dreams, confidence, and ambitions to wife relegated to life as an imprisoned bird in a gilded cage, then desperate mother and horrified witness replaying the entrapment of generations.

Juan Luis Acevedo plays the older patriarch, Quintín’s father, with chilling control and civility. The actor is a master in presenting the cruelty and darkness of an ego that will not be crossed then surprises us, spilling out long-held secrets.

Evelyn Rosario Vega as Petra gives a nuanced portrait of a woman who because of her caste has been forced to live her life in the basement and work as maid to this entitled family. She knows members of this family better than they know themselves. Her confrontation of racism as the order of things played out in this household is one of the most powerful and welcome moments in the play and deserved the spontaneous burst of applause on opening night.

Omar Cruz and María Coral carry the all-important and pivotal third-generation story. I was a little puzzled by the casting of Coral and the big deal about her character’s mixed-race parentage when she appears the lightest actor on stage, but perhaps this choice was made to point out race as a construct. The two actors had good chemistry, presenting themselves as both unvarnished romantic idealists and radical revolutionaries.

Luz Nicolás is GALA’s secret weapon; no matter what the company throws at her she is equally at home with manic quirky comedy and elegant language dramas. It helps that she understands how to embody character through costume and can physically transform herself instantly, changing her center of gravity, lifting her head or contracting and tilting off-center, and focusing our attention on how her arm gestures deliver some new character revelation. Here she has a moment where her character Rebecca reveals her hidden dream as Salomé the dancer. The words stop, and Nicolás doesn’t so much dance the seven veils as pull us into what her character internally imagines. The moment is gone all too soon. The ether lingers of who Rebecca really is and who the woman unhampered might have become.

The problem for me was in the writing. Svich is a renowned and prolific playwright, adaptor, and translator, among her many accomplishments. It surely was a challenging task to adapt a ranging multi-layered and -generational saga to the stage. The text-heavy work seemed bent on delivering every history lesson we needed to learn about Puerto Rico. The all-important political division of the island between those who want statehood and those who want independence was lobbed at us like a missile time again and eventually made for intellectual harangue more than satisfying drama. Another element of the play was the repeated patterns of gender roles and patriarchal power in families and the individuals’ seeming denial or lack of awareness. Trimming might have helped in places.

The play is best when it focused on the moments when character and relations shift and leave us with uncomfortable questions. Why does the American-educated progressive Isabel succumb to become the silenced wife, raising questions about fear of abuse and/or becoming comfortably numb, and does she definitively find her own voice? What is the moment when a person of color says, “Enough is enough. I am done,” and the woman walks away, and, in such a prescribed society, what is there for her? Are we meant to believe the third-generational romance can break the cycle and offer real alternatives?

GALA Theatre has given us a powerful premiere and a story to chew over. Despite its flaws, the work demands that we take it in and consider what it is telling us. Seriously.

Running time: Two hours and 30 minutes with one 20-minute intermission. 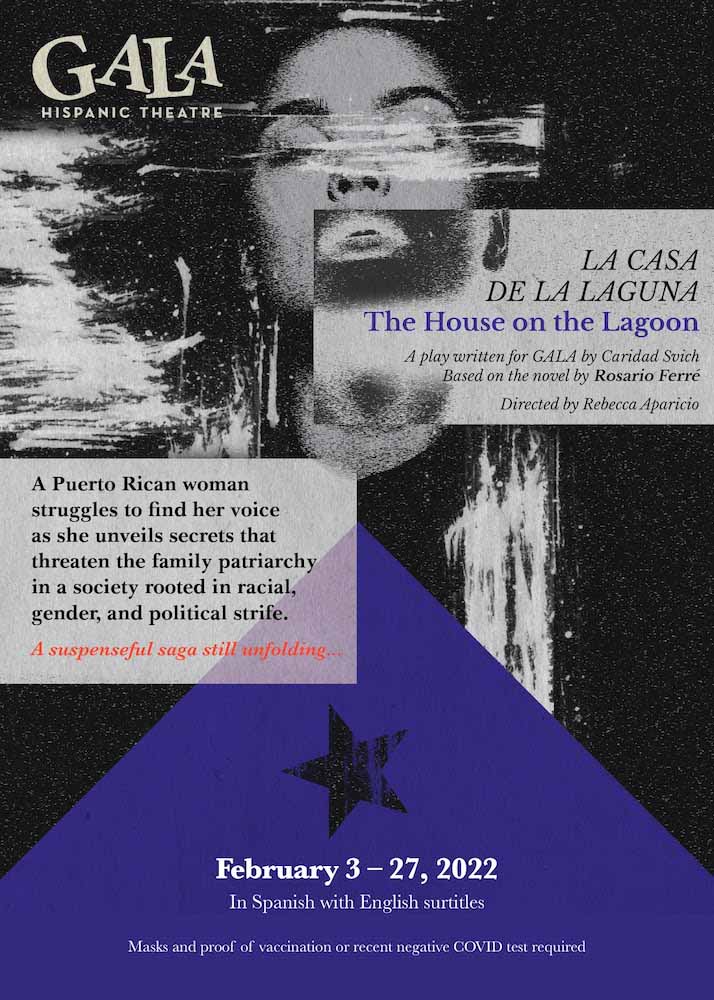 La casa de la laguna (The House on the Lagoon) plays through February 27, 2022, at GALA Hispanic Theatre, 3333 14th Street NW, Washington, DC. The production is presented in Spanish with English surtitles Thursdays through Saturdays at 8 pm and Sundays at 2 pm. Tickets ($48 regular; $35 seniors, students, teachers, and military; $25 patrons ages 25 and under) can be purchased online or by calling 202-234-7174.

GALA is one block from the Columbia Heights Metro station on the Green and Yellow lines. Parking is available at a discount in the Giant parking garage off Park Road NW.

La casa de la laguna (The House on the Lagoon) is appropriate for ages 12+.