Grace, the new musical playing at Fords Theatre through May 14, is a great roller coaster ride of a show: an unstoppable, overwhelmingly entertaining force that is also a compassionate meditation on grief, gratitude, and culture.

The death of the Minton family matriarch, Gran’me, is the occasion for members of the family to come together to memorialize her. As they gather they bring with them their pride of belonging to the family that created the successful restaurant known as Minton’s Place. They also bring with them unresolved family misunderstandings, tendencies toward isolation, and other conflicts. All of this energy is backgrounded by the 400-year-long struggle of people of African heritage to resist and thrive in the face of an antagonistic state. This struggle is reflected and underscored by rapid gentrification of the neighborhood that Minton’s Place has anchored for so long. What most of those attending the memorial service don’t know is that the restaurant is in financial difficulties and Ruthie (Nova Y. Payton), who has been managing the place, may be forced to sell the property. As preparations for the memorial service progress, the members of the family face the need to be more open with each other.

That’s the plot. But the plot is not the most important thing about this show. It is this ritual of preparation for the memorial service that is being held in response to this collective family crisis that is at the center of this show. It’s relevant that we, the audience watching this performed ritual, constitute our own kind of family that is in the midst of its own collective national and global crises, along with personal crises exacerbated by COVID.

In the onstage crisis, the death of the matriarch has unmoored the family. Her life, and the institution that she established, have been the stabilizing forces for the family and the larger community in the face of oppression of Black people in America. How that survival and stability can be maintained after her death is not clear.

The components of the audience’s offstage crisis are legion and without a generally agreed-upon coherent articulation. But it includes the destruction of the only habitat that human beings can survive in, the unmasked rise of global corporate authoritarianism, the apparent abandonment by the USA (the “city on the hill”) of the idea of democracy, the ongoing oppression of Black folks in America, symbolized by the murder of George Floyd and the international response to it as people saw themselves in George Floyd. You can add your own. The point is that the preparation ritual on the stage of Fords Theatre is not merely for the Minton family but for all of us who find ourselves grieving. Where is our Gran’me?

Everyone in this show and everyone who worked on this show is overqualified. But what makes the show unstoppable and entertaining is the way director and choreographer Robert Barry Fleming has harnessed the energy of this brazenly talented and skilled cast of individuals into one elegantly coordinated company. He does this totally in the service of the book, music, and lyrics. This show has been put together by a team of theater craftspeople, with the emphasis on craft. Anywhere you look on stage at any moment there is coherence and readiness on the part of each of the performers to respond to everything around them. Everyone seems to be connected to everyone else. (These connections emphasize the point that they are family, no matter what conflicts and differences we may see on the surface.) And the intense attention and connection among the performers energize us, the audience.

The musical — with music and lyrics by Nolan Williams, Jr., book by Williams and Nikkole Salter — was originally conceived as a revue, and the current script reflects that. The script is a workable scaffolding designed to respectfully support the ritual and for the composition, lyric writing, directing, choreographing, singing, and dancing to hang from. All of the character development and relationships are revealed through these other aligned disciplines.

There are two standing ovation moments that are guaranteed in this show. One takes place at the very end, when Joshua (Rayshun LaMarr), the younger-generation disc jockey, at the conclusion of the memorial service urges the audience to get on their feet and move to the music. On the one hand, it’s cute and manipulative. On the other hand (in what may be a northern inflection of the New Orleans ritual of the second line), it happens at Black folks’ memorial services all the time.

The other standing ovation occurs near the beginning of the show as Ruthie (Nova Y. Payton) sets the plot in motion. “Again?” is Payton’s big number. It’s what you go to American musicals for. Payton voice is that of a Black holiness church diva in the testimony service tradition. For those who don’t know, I should point out that when one steps forward to offer one’s testimony before the congregation (for the mutual edification and affirmation of both congregation and the individual church member), one does not lie. Thus, Payton’s Ruthie is totally committed to this song, which lays out the generational struggle to resist oppression and to maintain the foundational place for herself and her people to be. And you don’t have to be a member of a specific religion to get the message.

Not only does she receive a standing ovation, but over the course of the song, there are many spontaneous gasps and vocal responses from the audience. What she accomplishes in this performance is multi-layered: sometimes raw and seemingly spontaneous and at other moments calculated and dazzling in its technical polish and genius.

SINCE THE WEDNESDAY BEFORE LAST,
I’VE BEEN GOING THROUGH BOXES ON THE SHELF.|THEY SAY, IN TIME, WE LEARN TO LIVE WITH LOSS BUT I CAN’T HIDE
THAT THIS NEW NORMAL IS HARD TO ABIDE.

Paul’s is a tender moment of grieving, delivered by a member of the family who chose academia as his battleground and intellectual achievement as his armor against the oppressions and attacks Black American males can be subject to.

Nolan Williams, Jr.’s music and the lyrics were surprising in many ways. The melodies in which the lyrics are suspended were consistently arresting. The actors seemed to luxuriate in the lyrics. It was a joy to watch them enjoying themselves.

The music does reach, at critical moments, into familiar musical spaces. There is a gospel parody “The Gospel Bird (This Chicken Died).” I am reminded here how much Black Americans love to “play church,” that is, through enactment, to comment on and remember how some of our beloveds behave in the ecstatic church experience of holy dancing and speaking in tongues. I also think about how gospel moved from being reviled to being 1) regularly appropriated and used to sell commercial products and politicians and 2) a mainstay of the Broadway musical. In this number, in this show, however, we joke among ourselves. We know the source of the joke. And we have relationships with the people who are being joked about.

The number is led joyously and shamelessly by Haley (Arica Jackson). During this same number, we get another glimpse of the character EJ (Jarran Muse), who has several points of estrangement from this branch of the family. His Black Card is always in danger of being revoked. He speaks Japanese and doesn’t know where to find the turkey necks in the supermarket. He finds “soul food” to contribute to high blood pressure, sugar diabetes, and high cholesterol and doesn’t eat it. So he is always being told to just sit down and stay out of the way. He is the one with money, but except for that money his offers of help are always declined. His insider/outsider status is the equivalent of the Hollywood movie wallflower who wears glasses and who, when her glasses are taken off, turns out to be a great beauty. Thus, when EJ breaks out in culturally impeccable and nuanced dancing during “The Gospel Bird,” we see he really is one of us. (And we also notice that he’s phyne as hell.)

Three women relatives — Jacqui (Raquel Jennings), Haley, and Ruthie — lead the song “A Hard Head Makes a Soft Behind,” a memory of some Black child-rearing philosophies and practices of a previous generation. The women’s voices blend flawlessly.

“Grace,” the title song, is a prayer exquisitely sung over the meal (in an arrangement reminiscent of the gospel group Take 6). Pointedly, it is not sung by a single leader but shared among everyone present. Grace is a statement of gratitude made even in the depths of grief and despair. It is also an appreciation of how those who came before us managed to face our challenges — all of them — and still rise. 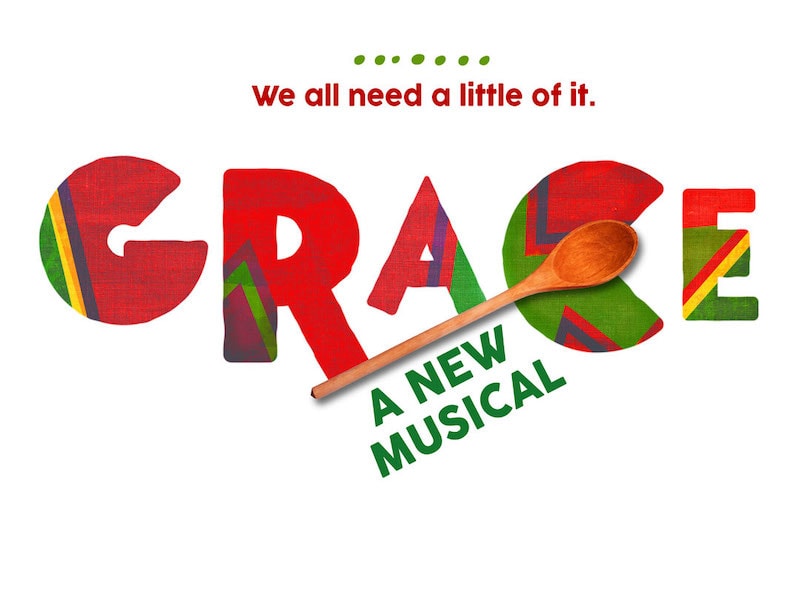 Grace will play through May 14, 2022, at Ford’s Theatre, 514 10th Street NW, Washington DC. Tickets are on sale now online and range from $22 to $81. Discounts are available for groups, members, senior citizens, military personnel, and those younger than age 35. The production is recommended for ages 10 and older.

All performances of Grace will be captioned via the GalaPro App. GalaPro is available from the App Store or Google Play and allows patrons to access captioning on demand through their phone or tablet device. Patrons set their phones to airplane mode and connect to the local GalaPro Wifi network before the performance begins. More information can be found at fords.org/visit/accessibility/galapro-captioning.

Regardless of age, all patrons with tickets to in-person performances are required to show a government-issued photo ID and proof of full vaccination status (physical copy or digital photograph of vaccination card) upon arrival to their performance for admittance. Ford’s Theatre will not accept negative COVID-19 rapid or PCR tests for unvaccinated individuals. All performance patrons must be fully vaccinated. Face coverings are also required for all.

Children ages 5 and older must be fully vaccinated and show proof of a vaccination card. “Fully vaccinated” means 14 days since the final vaccine dose in the regimen. Acceptable forms of government-issued photo IDs include driver’s licenses and passports. Patrons under 18 must be accompanied by an adult that meets the above requirements. Performance ticket holders who do not comply will not be admitted.

Ford’s Theatre COVID-19 guidance is developed in collaboration with the George Washington University Medical Faculty Associates (GW MFA). As one of the largest physician groups in the Washington, D.C., metropolitan area, GW MFA is recognized for excellence in clinical care, research and training of future care providers. The advice and expertise of the medical staff at the GW MFA, which is based on data and guidelines from the Centers for Disease Control and Prevention, has helped Ford’s Theatre Society strengthen its safety procedures to better serve and protect patrons, artists and staff as productions and daytime visits resume. For more information about Ford’s Theatre health and safety protocols, visit fords.org/visit/covid-health-and-safety/.