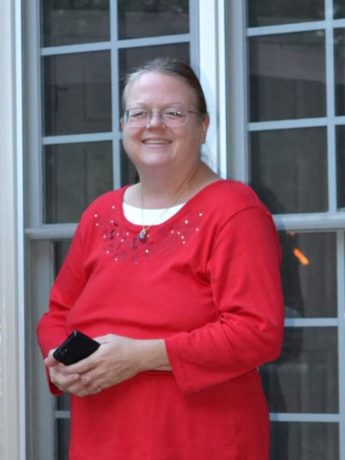 I first met Zina Bleck in 2003 after retiring from the Navy. I had not been on stage for 23 years and she cast me in How I Learned to Drive as the male lead. We became fast friends, and would often meet for breakfast every weekend when we were both in town. Over the years I worked on more than 20 shows with Zina.

Zina Bleck was born April 20th, 1961. She passed away unexpectedly March 26th, 2022 less than a month shy of her 61st birthday. Zina had many loves: cats, Star Trek, Dark Shadows, old movies, Halloween, travel, music, Beanie Babies (given after every show to cast and crew) and anything purple (she dubbed herself The Purple Partridge). However, Zina’s passion was live theatre. Zina caught the theatre bug while attending Hollywood High School in California. She continued on to receive a bachelor’s degree in Theatre Arts from Occidental College in Los Angeles. After college and working at various organizations, Zina decided she needed a change of scenery and moved to Reston, Virginia. She landed with Reston Community Players where after a short time found herself directing and producing shows. She spread her wings to other groups like Tapestry, Springfield, The Arlington Players, Prince William Little Theatre and her home: Castaways Repertory Theatre. A passion to give more to the theatre community led Zina to establish Zemfira Stage, a non-equity professional theatre that had the family feel of a community theatre.

Zina cared deeply about giving people the chance to experience quality theatre. Whether you were established in the community or a novice, you were welcome with Zina. She added characters and chorus members to many of her plays and musicals to give people the opportunity to be onstage. When it came to casting, Zina was color-blind, gender-blind and blind to disabilities. One of Zina’s favorite sayings was “After all this is community theatre, so I will cast the community.” If she knew someone in a play, she made it a point to attend that play. If it was a comedy, you knew Zina was in the audience. Her laugh was unmistakable.

Since Zina’s passing, I have heard from hundreds of people all over the country she had touched. College friends, work colleagues and of course her theatre community. Our lives are all better for having known Zina. Our hearts are also with her very close friend and companion Leonard. Zina, you will be missed and will always be in our hearts. Rest with Angels.

The memorial will be held between the matinee and evening performances of Cinderella. It will begin around 4:30 or 5:00 EDT. Attendees are encouraged to attend one of the performances of Cinderella – Zina’s last show as Director – before or after the memorial. Jim Mitchell will serve as the MC. There will be very few speakers at the memorial due to limited time. People who wish to share a memory are asked to write something and send it to Harry Kantrovich at profharry@aol.com.

Memories may also be left here in the comments section below.