In ancient Greek mythology, as recounted in Homer’s Odyssey, Penelope is the faithful wife of Odysseus, the King of Ithaca. Despite her husband’s 20-year absence (while fighting the Trojan War, then as the captive lover of the nymph Calypso), she devises plans to evade the 108 suitors intent on marrying her and taking over the kingdom. When Odysseus returns, disguised as an old beggar, she announces a bow-and-arrow contest that she knows only he could win. He does, then kills her suitors, revealing his actual identity to everyone. To confirm that it is indeed Odysseus, Penelope tests him again with the task of moving their bed (something only he would know is impossible), proving that he truly is her husband. It is then inferred that they go on to live a long and happy life together at court with their now-adult son Telemachus.

But that’s not exactly how it goes in the world-premiere musical comedy Penelope, or How the Odyssey Was Really Written, with book and lyrics by Peter Kellogg (who also wrote the award-winning musical Desperate Measures) and music by Stephen Weiner, playing a limited Off-Broadway engagement at The York Theatre Company through Sunday, April 24. Directed and choregraphed by Emily Maltby with laugh-out-loud energy injected with moments of serious reflection, this version offers a new perspective on the tale, in which the eponymous Queen is the true author of the Homeric classic, composed of the letters she writes to herself and reads to her suitors, pretending they’re from Odysseus. In them, she invents the unbelievably “bizarre” adventures recounted in the Odyssey, and says that he’s on his way home, so she can’t remarry. And here he only kills Antinous, who exposes the letter-writing scheme, but allows the others to go on tour as the a cappella group they formed while awaiting Penelope’s decision on which of the suitors she will choose (there was nothing else to do, the acoustics in the Great Hall are terrific, and the ones who aren’t picked can sing at the wedding).

Sound zany? It is. And that’s only a small part of the comical mash-up of antiquity with post-modern times, shifting the central focus of the epic myth from Odysseus’s journey to Penelope’s, in a work that is self-described as “funny, feminist, and fully relevant to today.” The witty script and score reference everything from the legendary figures and background episodes of the 12th century BC to a trenchant laundry list of the titular woman’s responsibilities and accomplishments over the two decades her husband was away, from a mid-century spit-take and sexual innuendo to the musical stylings of doo-wop, barbershop quartets, and even sly nods to Broadway’s Hadestown and West Side Story.

Depending on your personal sense of humor and your definition of feminism, there are a few segments that miss the mark on both funny and feminist. The bloody slaughter of anthropomorphized pigs, portrayed by the actors in masks, hits too close to home for animal lovers and vegetarians to find comical, and the final happy resolutions – between Penelope and Odysseus (as in the original ancient text) and with her own achievements (even though the world will never know what she did) – maintain the sexist status quo from time immemorial of women remaining accepting and anonymous (not my idea of feminism).

A winning and euphonious cast of ten delivers the riotously reimagined situations, distinctive personalities, and highly entertaining songs (vocal arrangements by Weiner, David Hancock Turner, and Steve Delehanty), backed by a rich five-piece orchestra (with music director and orchestrator Turner on piano, Gregory Jones on bass, John Skinner and Mike Raposo on reeds, and Allison Seidner on cello). Taking the lead as Penelope is Britney Nicole Simpson, whose powerhouse ballads and emotional expressiveness capture her character’s capabilities, struggles, strength, and heart. And horniness (when she feels the touch of her husband, disguised as the blind poet Homer, after all those years of celibacy).

Leah Hocking brings the big notes and big presence as Eurycleia, Odysseus’s childhood nurse who has been there to support Penelope through the years and to encourage her in her present circumstance. Philippe Arroyo as the unsure Telemachus and Maria Wirries as the dirt-covered pig-farmer Daphne make for a youthfully charming mismatched pair in their mutually encouraging coming-of-age romance, and Ben Jacoby as Odysseus makes the transition from his guises as a lowly beggar and the elderly Homer to the long-absent King he is, who must now deal with his wife’s suitors – and with probing questions from her about his notably increased sexual prowess since last they were together.

The most hilarious highlights of the show are provided by the suitors – Cooper Howell as the ruthless Antinous (his death scene is a killer) and the quartet of David LaMarr as Mileter, Jacob Alexander Simon as Bassanio, George Slotin as Haius, and Sean Thompson as Barius – whose perfect comic timing, flamboyant characterizations, sidesplitting moves and poses, and flawless vocal harmonies, as they move from competition to camaraderie, consistently elicit laughter and embrace the spirit of over-the-top parody.

James Morgan’s archaizing scenic design (with a painted backdrop of the Ionian Sea), clever props by Kate Field, and character-defining costumes by Lex Liang set the era of the story with a contemporary pop sensibility that speaks to our present day. Lighting by David Sexton changes with the time and moods (though lights on the orchestra’s music stands sometimes distract, as they visibly shine through the background scrim), and Brad Ward’s sound is clear and resonant.

After their acclaimed collaboration on Desperate Measures, it’s a pleasure to see The York and Kellogg back together again in signature style with Penelope, retelling, along with Weiner, a classic tale in a smart and amusing new way – even if it’s more female-centric than full-out feminist. 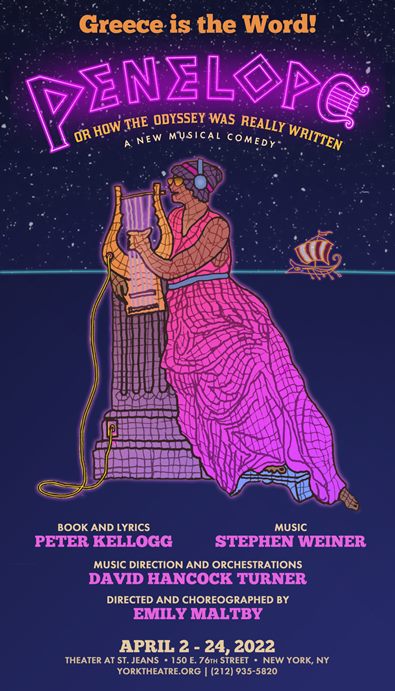 Penelope, or How the Odyssey Was Really Written plays through Sunday, April 24, 2022, at the York Theatre Company, performing at The Theatre at St. Jeans, 150 East 76th Street, NYC. For tickets (priced at $55-75, plus a $4 convenience fee, with senior and student rush tickets available for $20), call the box office at (212) 935-5820, or go online. Proof of vaccination and a photo ID are required upon entry, and masks must be worn at all times inside.