Creators Scott Griffin and David Hudson announced that the Washington, DC, production of the “smashed” hit comedy, Drunk Shakespeare, will open at The Sage Theatre (located at 1100 13th Street NW) on Thursday, June 16, 2022, for a limited run through October 1.

Directed by Hudson and Lisa Klages, Drunk Shakespeare is a New York Times Critics’ Pick and “the best thing to ever happen to the theater” according to Slate Magazine. It begins with one actor drinking five shots of liquor before attempting to lead the cast through a Shakespeare play in under 90 minutes. The show is performed at The Sage Theatre, a new venue constructed from the former Drafthouse Comedy Theater, which shut its doors in 2020. The Sage Theatre will feature a library speakeasy with 15,000 books and craft cocktails served throughout performances. 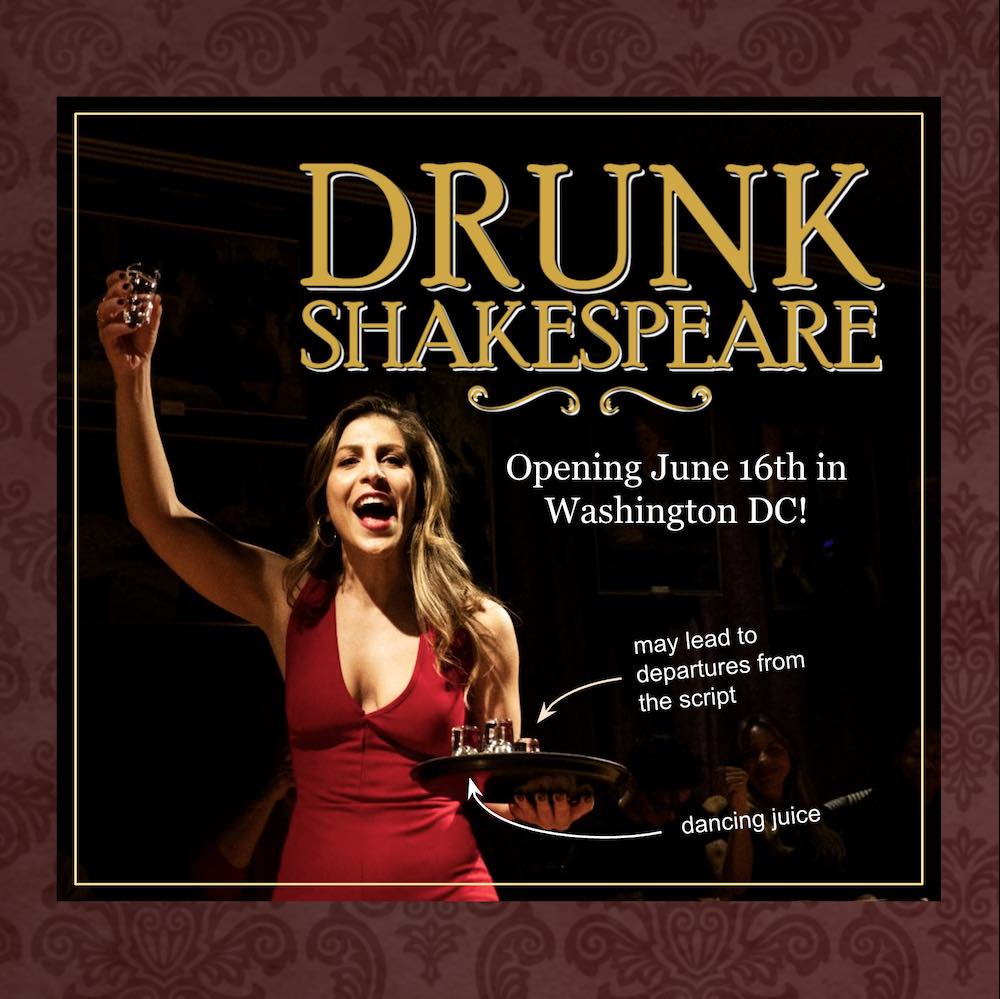 The Drunk Shakespeare Society has been meeting, drinking, and performing Shakespeare for over a thousand nights … and over a thousand liters of liquor. This talented troupe of rotating members loves sharing the epic poetry of William Shakespeare, but you don’t need to know a lick of it to enjoy yourself. Pop culture references, improvisation, audience games, a wealth of surprises, and liberal departures from the text (with outrageous consequences) make this accessible for anyone who likes a good time. Every night is different and truly anything can happen.

The show will open with performances on Thursdays at 7:30 pm and Fridays and Saturdays at 7 pm and 9 pm. The company’s comprehensive COVID protocol is available at DrunkShakespeare.com. Only ages 21+ are admitted. Tickets are $39 for balcony seating, $59 for mezzanine seating, and $79 for stage-side seats, which get you closer to the action.

A single luxury experience is available for $500, which allows you to be Queen or King of the evening, including a throne and crown for two, a bottle of Moet & Chandon champagne, caviar, hand-crafted chocolates, and most important, decision-making powers during the show… If nobody reserves the Royal treatment beforehand, it is auctioned off to the highest bidder at the start of the evening. For more information and tickets visit DrunkShakespeare.com.