“I am elated that after years of workshopping Pooled, a sold-out world premiere, and touring throughout North Carolina, I’ve been afforded the opportunity to premiere it here at ‘home’,” said the former DC and Maryland resident. “Because this play contains music and stories I wrote 20 years ago and depicts some of my personal struggles while I was a resident, to see it brought to life here is truly a full-circle moment.” Greene lived in the Washington Metropolitan Area from 1999 to 2010.

Pooled made its national debut in 2019 at the National Black Theatre Festival (NBTF), where it was named “one of the 25 best Black theatre productions in the United States, Europe, the Caribbean, and Africa.” According to Jackie Alexander, artistic director for the North Carolina Black Repertory Company, the producers of the NBTF, “It just jumped out at us when we saw it. Pooled is breaking the mold of what people think of in terms of traditional gospel musicals.”

In 2019, Pooled became the first production in the festival’s history to sell out its performances during its inaugural selection. Additionally, in 2021 Greene received the Broadway World Award for “Original Script of the Decade” for the Raleigh market. He is hopeful the play will be selected again for the 2022 NBTF this August.

Pooled is about Delsin Jacobs’s arrival at the Pool of Bethesda and his single-minded determination to be the next person to receive its healing properties. According to legend, the first person to step into the Pool after its waters are touched by an angel (troubled) is healed completely of any infirmity—physical, emotional, mental, relational, spiritual, sexual.

Though Delsin is driven by a resolve to receive a healing that enables him to see what his heart looked like before he was sexually abused as a child, his interactions with others gathered at the Pool cause him to question the purity of his quest. When his moment presents itself, he is made to confront whether he wants to be the only one healed or not.

Moses T. Alexander Greene, a native of Long Island, New York, moved to the DMV in 1999, shortly after leaving his position as writers’ assistant on ABC’s All My Children. During his nearly 12-year residency, he served as strategic communications officer of Prince George’s County Public Schools, public information officer in the Executive Office of the Mayor and for several District of Columbia Government agencies, and as an adjunct English professor at Prince George’s Community College. A licensed minister, he was also a member of the First Baptist Church of Glenarden in Upper Marlboro, serving mostly in music and arts ministry.

“I hope those with whom my life intersected while I lived here and all who know theater can be a balm of healing, joy, remembrance, laughter, forgiveness, and love would come see the show and feel the power of their own pool experience,” Greene continued. 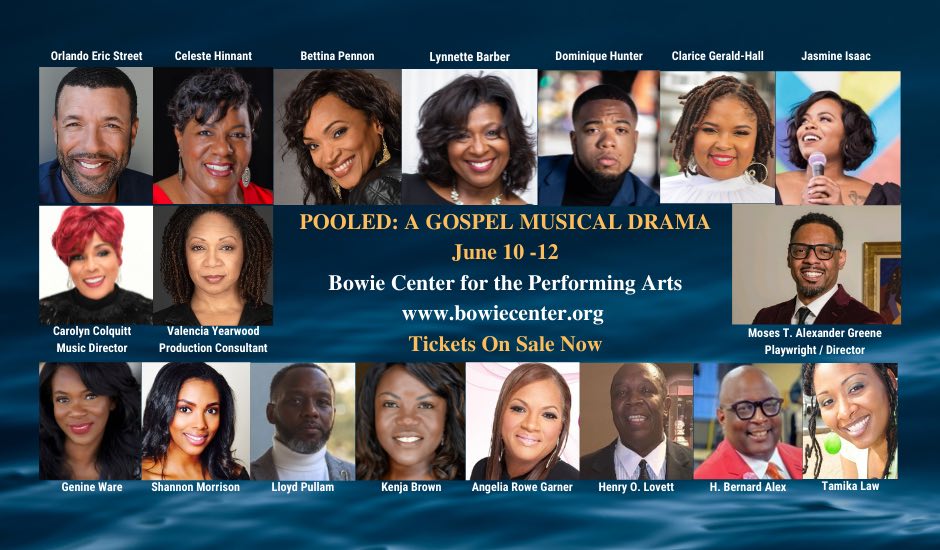 About Li VMahob Productions
Founded in 2007, Li V Mahob Productions has evolved into a history-making Black theater and cultural arts production company dedicated to creating and producing content that ensures theater is a place of belonging for African Diasporic peoples as well as a reflection of BIPOC cultural practices, lived experiences, and identities. Its mission is to broaden the legacy and impact of African American and African Diasporic cultures by creating content and producing works that promote belonging, expand consciousness

COVID Safety: The Bowie Center for the Performing Arts cares about your safety.  We politely, but strictly enforce all mandates from the state, county, and public schools. Please be courteous and understanding in this new environment and adhere to all signage and direction from our staff.

All audience members are required to wear masks regardless of vaccination status. Please do not arrive at the facility without your mask.

Ushers will seat our patrons in “packs,” meaning you will sit with the group you arrive with, but socially distant from other audience members.