The Keegan Theatre has announced its 2022-2023 season, its 26th, featuring eight mainstage productions in its intimate and welcoming theater home in Dupont Circle. The season includes the world premieres of two newly commissioned works from DC-area playwrights, one regional premiere, one DC premiere, two musicals, and a Pulitzer Prize-winning play.

“We have an exciting season planned, as we strive to continue our commitment to presenting a wide range of offerings for audiences,” says Susan Marie Rhea, the company’s Artistic Director.  “Our upcoming season includes DC, regional, and world premieres, and a lineup of shows that enrich, entertain, tickle the funny bone, provoke the mind, and – most importantly – connect us to each other through the power of theater: outstanding storytelling by extraordinary artists from across the DMV.” 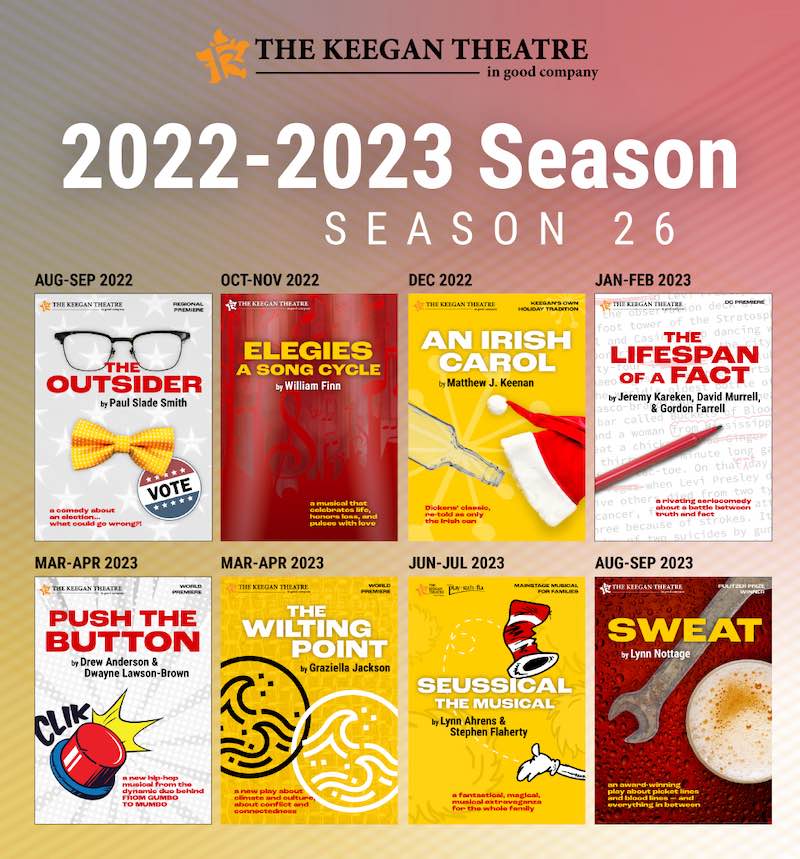 Artistic teams will be announced in the coming months, as will additional performances as part of the company’s new works-focused Boiler Room Series initiative. More information about the 2022-2023 season is available online, and single tickets and tickets packages are now on sale. Please visit keegantheatre.com.

“Funny, timely, and dare we say, entirely possible, The Outsider is a wonderfully crafted, superbly presented show… It is an insightful, witty satire about modern American politics that will appeal to a vast audience.” — Broadway World

ELEGIES is a celebration of life and music, penned by Tony Award-winning composer and lyricist William Finn, which commemorates the lives of people both real and fictional with rousing theatricality and unforgettable songs. From Finn’s friends, to his mother, to his dogs, to the victims of the World Trade Center collapse, these characters and their stories will enchant and enrich your spirit in this stunning masterwork that celebrates the human experience and life’s infinite joys.

“The loquacious ghosts who hover through the nearly two dozen songs that make up William Finn’s moving and exuberant song suite, Elegies, aren’t the mournful twilit phantoms who haunt the typical popular song memorializing a loved one. These friends and colleagues of the composer’s who have died over the last two decades are resurrected in playful lyrics bursting with internal rhymes that remember them in all their quirky vitality.” — The New York Times

An original work by Keegan company member Matthew J. Keenan, AN IRISH CAROL is an homage to Dickens’ classic – told as only the Irish can. This comic and touching play, set in a modern Dublin pub, follows one evening in the life of David, a wealthy pub owner who has lost touch with his own humanity in the interest of self-protection and material success. But on this Christmas Eve – challenged by a voice from the past, provoked by those in the present, and faced with the reality of a lonely future – David’s life may change forever.

“Trust the Irish to put a bit of grain in the eggnog. AN IRISH CAROL is sweet and cheerfully profane…” — The Washington Post

“[T]he fairy tale-scope and primary colors of the classic tale brought down and into a more subtle and sepia-toned mood. … An Irish Carol will go down like a glass of smooth whisky on a cold winter night.” — DC Theatre Scene

Jim Fingal is a fresh-out-of-Harvard fact checker for a prominent but sinking New York magazine. John D’Agata is a talented writer with a transcendent essay about the suicide of a teenage boy — an essay that could save the magazine from collapse. When Jim is assigned to fact-check D’Agata’s essay, the two come head to head in a comedic yet gripping battle over facts versus truth.

“Terrifically funny…the debate at the heart of this play transcends comedy and demands serious attention.” —Variety

“…buoyantly literate…wholly resonant questions [are] wrestled with in this briskly entertaining play…you’ll find yourself happy to have your preconceptions disturbed and assumptions unsettled.” — Washington Post

In a town beset by the sordid shenanigans of a prank-prone Villain, justice finally seems to be served when the celebrated Hero accuses Villain of the worst crime of all: Pushing the Button. But when the dutiful Journalist starts asking the right questions, will convicting the Villain prove to be the wrong answer? This playful and poignant parody of modern morality will ask its audiences to question their very notions of right and wrong, crime and punishment, truth and narrative. But most of all, it will beg the question: “Who Pushed the Button??”

PUSH THE BUTTON is a bold, boisterous, brand new hip hop musical from the creators of the Helen Hayes-nominated play FROM GUMBO TO MUMBO, Drew Anderson and Dwayne Lawson-Brown.

In THE WILTING POINT, audiences travel with Mina Melo, the producer of the award-winning podcast Clime, back to the Sangre de Cristo Mountains in Southern Colorado, where she is reluctantly adapting Clime as a series for a new streaming entertainment company. The series producer wants Mina to pick up with an unsolved murder investigation, but Mina is determined to tell a story about how climate-related water shortages and drought are threatening the community’s way of life.

THE WILTING POINT is one of four plays in Graziella Jackson’s ELEMENTS cycle, which explores the intersection of local communities, media representation, and the climate crisis. Keegan will present readings of Jackon’s other three ELEMENTS plays during the 2022-23 season.

A fantastical, magical, musical extravaganza for all ages, SEUSSICAL: THE MUSICAL lovingly brings to life all of our favorite Dr. Seuss characters, including Horton the Elephant, The Cat in the Hat, Gertrude McFuzz, lazy Mayzie and a little boy with a big imagination — Jojo. The colorful characters transport us from the Jungle of Nool to the Circus McGurkus to the invisible world of the Whos in a musical adventure which tests the powers of friendship, loyalty, family, and community…

“The chief virtue of Flaherty and Ahrens’ book is that it focuses on the underdogs in the Seuss canon — from those microscopic Whos and their pachyderm protector, Horton, to plain-Jane avian Gertrude McFuzz, who wants a larger tail to attract Horton’s eye …. [A] show that celebrates friendship and community as much as the power of the individual imagination, and proves that those qualities are not mutually exclusive…” — Chicago Tribune

Filled with warm humor and tremendous heart, SWEAT tells the story of a group of friends who have spent their lives sharing drinks, secrets, and laughs while working together on the factory floor. But when layoffs and picket lines begin to chip away at their trust, the friends find themselves pitted against each other in a heart-wrenching fight to stay afloat.

“Keenly observed and often surprisingly funny—but ultimately heartbreaking—the work traces the roots of a tragedy with both forensic psychological detail and embracing compassion. Ms. Nottage…is writing at the peak of her powers…” — New York Times.