Fresh off a series of concerts with Joe Iconis & Family last week at 54 Below, sessions at this month’s BroadwayCon, and his long-pandemic-delayed June wedding, NYC native Will Roland (Be More Chill; Dear Evan Hansen) is now in rehearsals for an all-new play with music making its debut in a limited Off-Broadway engagement at 59E59.

The Panic of ‘29, written by Graham Techler (The Moderators), directed by Max Friedman (Midnight at The Never Get; Be More Chill), and produced by the indie company Less Than Rent Theatre, takes a riotous reimagined look at the New York stock market’s Great Crash in October 1929, which brought a devastating end to the prosperity and dynamism of the Roaring Twenties, following a band of misfits through the aftermath.

Will graciously made some time in his non-stop schedule to speak with me about the show, its relevance, and his role in it, before performances begin on Saturday, July 23.

How does it feel to be back at 59E59, where you made your professional debut in 2011, after graduating from NYU?

Will: I feel like I’m returning to the scene of the crime! I love that building and specifically the Theater B space because it’s so intimate. It’ll feel like a really big show in that small space. Last time I was there I saw a show with a cast of four. We have ten people in the cast, so it will feel huge!

Since the 59E59 production of The Panic of ’29 is a world premiere and audiences won’t be familiar with it, can you give us an idea of what it’s about?

It is a dark comedy, kind of a slapstick Lehman Trilogy, with three acts in under two hours. We first meet a small group of people drinking, spending money, and having a good time on the day the stock market is about to go belly up. Then it imagines the world afterwards, with the characters navigating the unfamiliar waters of the ‘30s and ‘40s. It’s not the actual history of Roosevelt and the New Deal; it’s a different idea of what MIGHT have happened

Is the style of the music, language, and design in keeping with the period, or are there elements that relate to our present time?

Graham has an unbelievable style! He’s a huge cinema buff, so there are references to Film Noir and Production Code. But he also injects a distinctly modern-sounding commentary in the old-style voices. We’re living in unstable times now, and the play pokes fun at what happens to the economy and the market – and why – so it is relevant for today.

Tell us a little about the character you play and how you’re approaching it?

I play Jimmy Armstrong, a writer for Crimes Magazine. He’s successful, but we don’t know if he’s good! He’s living high on the hog and benefitting from the boom times, so when everything goes topsy-turvy, he wonders if anybody will have any use for pulp crime writers.

Even though it was written long before the pandemic, the story is very relatable for me over the past two and a half years, when actors didn’t have jobs and it wasn’t clear if anyone would be buying what I have to sell. Acts 2 and 3 are in that spirit: “What the hell do we do?” The financial collapse feels like the apocalypse and it gets crazy. If we do a bad job with the show, it will make you laugh. If we do a good job, it will make you laugh and make you think.

Do you find comedy more fun or more challenging to perform than drama?

I think they each present different challenges, and I enjoy the challenges that come with comedy. Comedy is music, it’s math, it’s formula, in strict and structured ways. I like the very strict guardrails given to us in comedy; it’s a fun way to play around. And the bulk of this show is a laugh riot – goofy and zany!

What’s the underlying message of the show and what do you hope audiences take away from it?

It’s a play about how people cope with gigantic earth-shattering events, testing friendships and chosen family; it’s about the closeness people find in times of desperation. I hope audiences find gratitude for the people who’ve been there for them when they needed it.

Are there any plans in the works for future productions, either in or outside of NYC?

I don’t have any information about that, but I think it would kill in a bigger house with a longer run. But personally, I dunno nuthin’!

Thanks so much, Will, for giving us a preview of the show; it was great to catch up! Looking forward to seeing you and the premiere of The Panic of ’29 later this month. 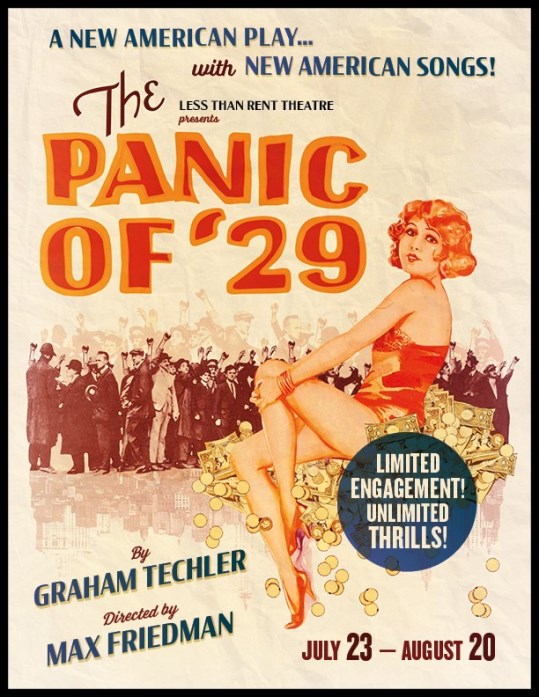