Adapted by writer Luc Plamondon and composer Richard Cocciante from Victor Hugo’s epic 1831 novel The Hunchback of Notre Dame, the musical spectacle Notre Dame de Paris has played to more than 15 million people in 23 countries since its premiere at the Palais des Congrès in Paris in 1998. It is now making its pandemic-delayed NYC debut in a limited week-and-a-half engagement at Lincoln Center. Directed by Gilles Maheu and performed in French with English translations (by Jeremy Sams) on digital screens at both sides of the stage, the sung-through production is an overly long incohesive hodgepodge that, for me, is more untenably overblown than dazzlingly spectacular.

The excessive reimagining of the classic tale, centered on the deformed bell-ringer Quasimodo and the beautiful gypsy Esmeralda, combines the melodrama of competing, suffering, and dying for love and sexual attraction with the plight of the outsider and the undocumented immigrant, in a clashing and disjointed mashup of Hugo’s iconic 15th-century setting and allusions to his own time with today. Sound-alike pop French torch songs with repetitive lyrics, unsynchronized dance and acrobatics (choreographed by Martino Müller) that lengthen and distract from the abridged narrative while contributing nothing to it, redundant staging and the simultaneous spotlighting of multiple performers in the gloomy darkness (lighting by Alain Lortie), ragged atemporal costumes (by Caroline Van Assche), and an anachronistic set (by Christian Rätz) – featuring a rock-climbing wall to represent the exterior of the Gothic Cathedral and erratically swinging bells with human clappers – could all benefit from a “less is more” approach (there is even the proverbial kitchen sink thrown in, if you count Esmeralda’s bathing scene).

Within the jumbled concept and design, a committed 23-member international company of dancers, acrobats, and breakers provides high-energy segments that are, inexplicably, interspersed in the choppy narrative and intermingled with scenes by the expressive principal cast of seven. Angelo Del Vecchio as Quasimodo and Hiba Tawaji as Esmeralda, supported by Daniel Lavoie as Frollo, Gian Marco Schiaretti as Gringoire, Jay as Clopin, Yvan Pedneault as Phoebus, and Emma Lépine as Fleur-de-Lys, all skillfully capture the passion of the story, embrace the personalities of the characters, and deliver impressive vocals, with arrangements and musical direction by Cocciante, Serge Perathoner, and Jannick Top. The standout of the show is Tawaji’s powerful rendition of the singular “Vivre” – which was a hit for Céline Dion, recorded in English as “Live (for the One I Love)” in 1999 – in which Esmeralda declares her intense undying devotion to Phoebus.

Individually, the acting, singing, and movement in Notre Dame de Paris are noteworthy, but in my estimation, the sum of the parts doesn’t add up to a satisfying cohesive whole.

Running Time:  Approximately two hours and 30 minutes, including an intermission. 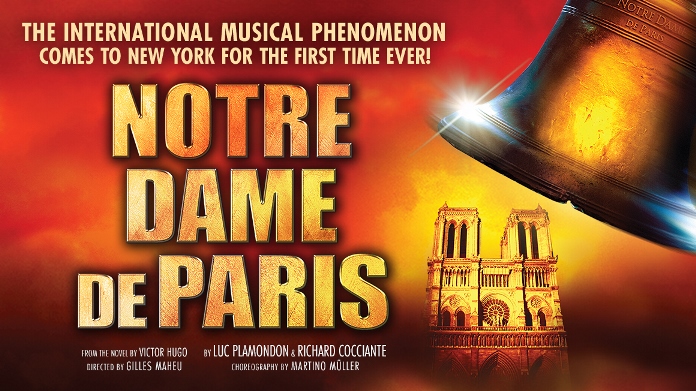