An in-person and virtual fundraiser, with proceeds benefitting the Ukraine crisis response efforts of HIAS – founded as the Hebrew Immigrant Aid Society in 1881, to assist Jews fleeing pogroms in Russia and Eastern Europe – is being presented on Wednesday, July 20, beginning at 7:30 pm, by NYC’s Museum of Jewish Heritage – A Living Memorial to the Holocaust and The Braid, a global non-profit theater company grounded in giving voice to Jewish culture and experience. The special event, I Want to Go Home: Stories from Writers in a Country at War, will spotlight ten new ten-minute first-draft works by Ukrainian playwrights, sharing stories, in English translation, of life during the ongoing Russian invasion of their country and offering audiences moving personal accounts as history unfolds.

“News stories about the plight of Ukrainians have led to an inspiring outpouring of support from around the globe, and now these works from Ukrainian playwrights will put an additional spotlight on the experiences of refugees who need safe places to live while they wait to see if they can return home,” said Miriam Feffer, HIAS’s Vice President for Development. “We thank the Museum of Jewish Heritage – A Living Memorial to the Holocaust, and The Braid, for supporting HIAS as we work with governments, UN agencies, and humanitarian organizations to protect the most vulnerable Ukrainians who have been displaced.”

Jack Kliger, the Museum’s President and CEO, added, “Theater is a powerful tool to uplift and share the voices of Ukrainians at a time when the world must hear their stories. We’re honored to partner with The Braid, whose storytelling has the power to inspire us to never stay quiet in the face of violence and hatred, and to support HIAS’s essential relief efforts in Ukraine.”

Those attending the in-person performance are encouraged to visit the Museum’s new exhibition The Holocaust: What Hate Can Do, an expansive and timely presentation of Holocaust history told through personal stories, objects, photos, and film, many on view for the first time. The Museum’s current offerings also include Boris Lurie: Nothing To Do But To Try, a first-of-its-kind exhibition on the 20th-century artist and Holocaust survivor, on view through November 6, 2022. 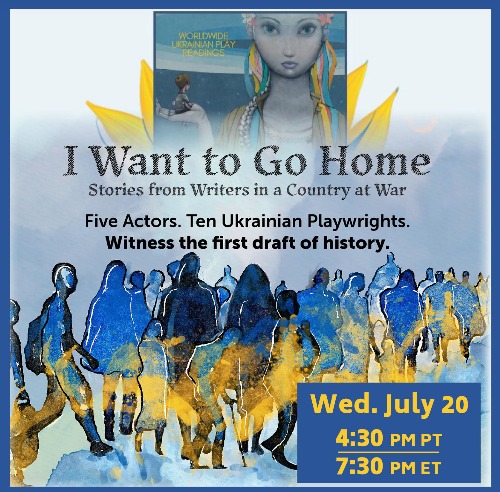 I Want to Go Home: Stories from Writers in a Country at War plays on Wednesday, July 20, 2022, at 7:30 pm, at the Museum of Jewish Heritage, Edmond J. Safra Hall, 36 Battery Place, NYC. For tickets (starting at $54 plus fees for the in-person performance, $18 plus fees for the livestream), go online. Proof of COVID-19 vaccination is no longer required to enter the Museum; face masks covering the nose and mouth are recommended for Museum visitors.