Ari Roth, the theater producer, playwright, director and educator, returns to the Washington, DC, theater scene this month, offering the first of five new-to-DC plays, along with his long-running Voices From a Changing Middle East Festival, as part of a new creative partnership with A. Lorraine Robinson, the veteran director, producer, and educator.

Under the new banner Voices Festival Productions (VFP), the two promise to develop and produce plays (and the occasional musical) that stimulate debate and discourse, introspection, and awareness, informed by revelation of our underlying humanity in all its color and complexity, finding resonance between those living with conflict in the Middle East and closer to home, in our nation’s capital, along the seams of our nation and its very real and perceived divides. 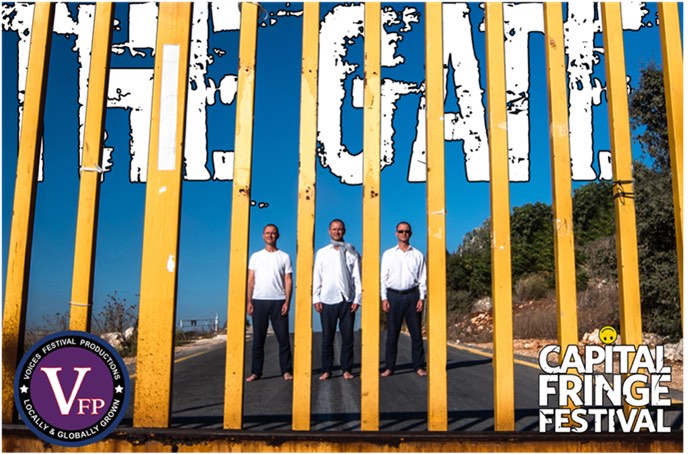 Voices From a Changing Middle East at Fringe: Losing/Finding Home, Part I

The first of VFP’s shows, in association with Capital Fringe Festival, is THE GATE, written and performed by Robbie Gringras, the British-born and -bred Jewish playwright/performer/writer/ educator living and creating in Israel since 1996. His theatrical and educational work bridges the Israel-Diaspora connection with empathy and insight, and relations with his Arab-Palestinian neighbors in the village adjacent to his are of utmost concern. Gringras’ solo shows have been performed throughout Europe, Hong Kong, Australia, Russia, and North and Central America, in English, Spanish, and Hebrew.

THE GATE asks: Do iron fences make good neighbors? Or resentful enemies? Should the gate that faces the local Arab village be locked shut, or should it remain open? Udi, who lost his brother in the War of Independence, fights for the gate to be closed. Yiftach, an aging peacenik, must do all he can to signal openness to his Palestinian cousins. And Amal, the caterer from the Arab village, just wants someone to open the gate so she can get home after a long day.

In the fall, Voices Festival Productions takes up residency at Woolly Mammoth Theatre in their intimate, alternate performance venue, the Melton Rehearsal Hall. Part II of the Voices From a Changing Middle East Festival offers three new plays in production, and an additional workshop reading of a provocative, new, award-winning drama, inaugurating its Voices From a Changing Nation series. VFP’s Woolly Mammoth Residency will include the World Premiere staging of: 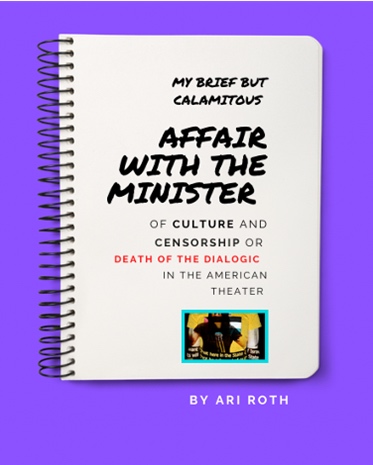 MY BRIEF BUT CALAMITOUS AFFAIR WITH THE MINISTER OF CULTURE & CENSORSHIP OR DEATH OF THE DIALOGIC IN THE AMERICAN THEATER by VFP founder Ari Roth and directed by John Vreeke (September 29–October 23, 2022) is the chronicle of a collaborative fracture and cross-cultural crack-up. As directed by longtime Woolly Mammoth Theatre Company member John Vreeke, a brand-new Executive Director and her former boss return to the scene of a rehearsal room revolt that set the stage for an Artistic Director’s departure from the theater he launched with high purpose and blind spots. Restorative Justice is on the agenda but hard to find, as a fictionalized, right-wing Israeli Cabinet Minister materializes uninvited to spar with Eilat and Samad, Israeli and Palestinian theater artists/activists, while their American hosts, Virginia and the unnamed AD, get caught in different parts of the middle, navigating treacherous terrain. They try to mend the unmendable, in a journey of personal loss and learning, reckoning and renewal, pushback, contrition, boycotts, and cancel culture — on both sides — all hanging in precarious balance. It’s followed by the American premiere of: 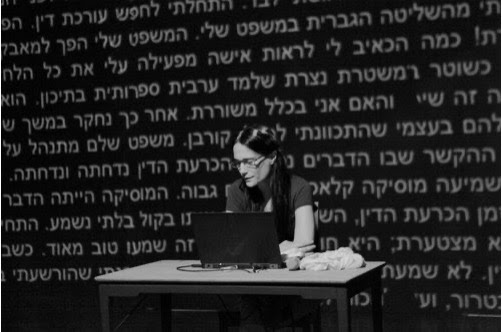 I, DAREEN T by Israeli actress/playwright Einat Weizman and Palestinian poet Dareen Tatour, directed by Nitzan Cohen (October 20-30, 2022). Dovetailing with the source material of MY BRIEF BUT CALAMITOUS AFFAIR…, Israeli theater creator, actor, and activist Einat Weizman’s solo documentary theater piece is based on the story of Palestinian poet Dareen Tatour, convicted by Israeli authorities for “incitement to violence” over a poem and two posts she published on YouTube and Facebook. A long legal battle (during which she was under house arrest) ensues, as Tatour argues that her poem and posts constitute legitimate protest against the crimes of Occupation. Weizman meets Tatour during her legal struggle and accompanies her to hearings. The encounters create a friendship that gives birth to a play.

Voices From a Changing Middle East Festival programming concludes with the workshop production of:

HOME? by New York-based, Palestinian-Israeli actress Hend Ayoub, directed by Carey Perloff (October 29–November 13, 2022). VFP Artistic Producing Partner A. Lorraine Robinson directs a reading of the 2021 Yale Prize–winning play. In Israel, she’s Palestinian. In the Arab world, she’s Israeli. In America, she’s an “Other.” From the extraordinary lead actress and director of Arena Stage’s 2020 production of A THOUSAND SPLENDID SUNS comes an electric one-woman show about a young woman’s journey to retrieve and imagine a new sense of home. On the way she learns: Why would you need to complete military service just to wait tables? Can you pass as an Israeli if you delete your Arab accent? Through a panoply of vivid characters — from a five-year-old who just wants to join the neighborhood Purim party, to an Egyptian casting director who can’t forget where she comes from, to her dying mother who longs for her daughter to find a place in the world — Hend shares a deeply personal, true story about a search for the place that many of us take for granted: Home.

In addition to its Middle East offerings, VFP will present a two-night reading of APOLOGIES TO LORRAINE HANSBERRY (YOU TOO, AUGUST WILSON) by Rachel Lynett, directed by A. Lorraine Robinson, on October 10 and 11 following the closing weekend of Woolly Mammoth’s season-opening Afro-futuristic comedy, AIN’T NO MO.’  The reading inaugurates VFP’s new series, Voices From a Changing Nation.

Winner of the 2021 Yale Drama Series Prize (selected by Pulitzer Prize–winning playwright, Paula Vogel), Rachel Lynett’s futuristic comedy is set in the fictional world of a post-second Civil War, in Bronx Bay, an all-Black state and neighborhood established to protect “Blackness.” As Jules’ new partner, Yael, moves to town, community members argue over if Yael, who is Dominican, can stay. Questions of safety and protection surround both Jules and Yael as the utopia of Bronx Bay confronts within itself where the line is when it comes to defining who is Black and who gets left out in the process.

VFP’s performances in residence at Woolly Mammoth will be performed in Woolly’s Rehearsal Hall, 641 D St NW, Washington, DC. Tickets will be available at a later date. 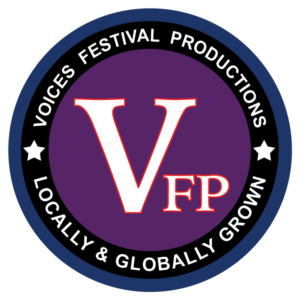 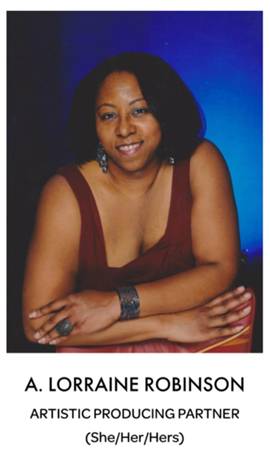 A. Lorraine Robinson (Artistic Producing Partner) is returning home to her theater festival producing roots by joining Founding Producing Partner Ari Roth in developing Voices Festival Productions. With 29 years of professional theater directing, dramaturgy, and producing experience (including a regional theater directing award, and 17 years of Community Arts Education theatrical production experience developing emerging artists of color that garnered three Honorable Mention Awards from the Tony Awards, and a fourth nomination for Theatre Education Excellence), Lorraine is ecstatically happy to pitch a new tent, and develop new auspices under which to produce and present works which champion storytelling, artistry, and humanity – in all its colors. “I look forward to creating a new platform for compelling and diverse voices.”

She continues, “In Ari, I’ve found both an experienced, knowledgeable producer, as well as an insightful, empathetic, and creative artist with whom to partner. We’re going to champion each other’s work and make space for other artists to join us as producing collaborators as well. I’m excited for this new endeavor and what we stir up next!” 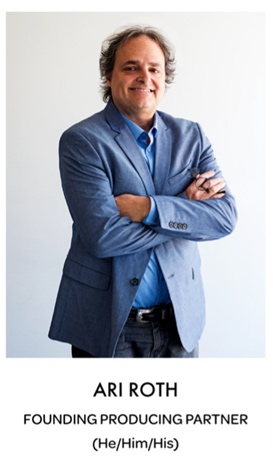 Ari Roth (Founding Producing Partner) created Voices Festival Productions as an LLC in June, 2021, eight months after stepping down from Mosaic Theater Company of DC after founding the troupe in December of 2014. The pandemic occasioned both a rupture, and a retreat, and then significant opportunity to reflect, regenerate and reboot with new intentionality and a more cohesive collaborative partnership. Roth has served as an Artistic Director in Washington DC since 1997 when he became Theater J’s third artistic leader, inheriting a staff of one and a $90,000 budget. Over 18 seasons, in partnership with the DC Jewish Community Center (the agency at which the theater remains one of 20 programs), he helped Theater J grow into the largest, most progressive and respected Jewish theater in North America.

The author of over 20 full-length and one-act plays, five of which have been nominated for Helen Hayes Awards, Roth is the author of the triptych, “The Born Guilty Cycle,” first produced as BORN GUILTY at Arena Stage, directed by Zelda Fichandler in 1991 and later at Theater J directed by John Vreeke along with its sequel. His comedy OH, THE INNOCENTS, winner of the Clifford M. Davy Award at GeVa Theatre, was directed by Joe Mantello and his play PRIVATE LESSONS was directed by Michael Grief at the Circle Rep Lab. His Helen Hayes nominated LIFE IN REFUSAL was directed by Wendy C. Goldberg at Theater J, and his most recent DC production, ANDY AND THE SHADOWS was directed at Theater J by Daniella Topol in 2013. In 2010, Roth was named as one of “The Forward 50,” honoring nationally prominent “men and women who are leading the American Jewish community into the 21st century, and in 2017 he was given the DC Mayor’s Arts Award for Visionary Leadership.

Roth continues to teach his signature course, “A Theater of Politics and The Politics of Theater” for the University of Michigan’s “Michigan in Washington” Program, where he and A. Lorraine Robinson (serving as official Guest Artist for the class) taught plays emerging from the Racial Reckoning on Broadway and in DC, as well as offering a comprehensive look at a half dozen plays emerging from the controversy-generating programming of the Voices From a Changing Middle East Festival (documented in Pulitzer Prize-winning journalist David Shipler’s 2015 book, “Freedom of Speech: Mightier Than The Sword,” a work that served as a textbook for the course). Ari and Lorraine’s partnership in the classroom mirrors their partnership as co-producers for Voices Festival Productions, and sets the stage for this year’s robust opening, with much more in store.

“Along with great synergy, Lorraine also has complementing but different curatorial interests from mine and that is an additional part of the excitement in collaborating,” Roth notes. “It’s wonderful to be able to still call DC an artistic home. And it’s rewarding to have people here — artists and arts supporters — friends, family, and neighbors too – eager for a returning to healthy, urgently-honest, thought-provoking theater producing.”

“I’m glad to be writing and glad to be jointly curating; making artistic choices in partnership with Lorraine, and in creative conversations with director John Vreeke and a cohort of dramaturgs, most especially journalist and playwright Debbie Minter Jackson, dramaturg Salma S. Zohdi and dramaturgical cultural consultant Adam Ashraf el-Sayigh, and over a dozen theater artists who’ve joined us for exploratory workshops. To be accepted at established venues like Capital Fringe Fest and Woolly Mammoth — to be invited in and offered this opportunity to stage Act III in my Producer’s Journey here in DC, now in tandem with a new partnership — is very moving, humbling, and restorative.”