NextStop Theatre Company has announced its tenth professional season of theater in Northern Virginia. The company’s first full season since the start of the pandemic will feature a wide assortment of titles ranging from beloved classics to bold new area premieres.

“This is a season full of big, beautiful, ambitious stories being told by exceptional artists and it has been carefully selected to delight, captivate, challenge, and reflect the incredible community that we are so honored to serve in Herndon and the larger Northern Virginia community,” says Producing Artistic Director Evan Hoffmann. “We cannot be more excited for the audience to experience the type of magic only theater can provide.” 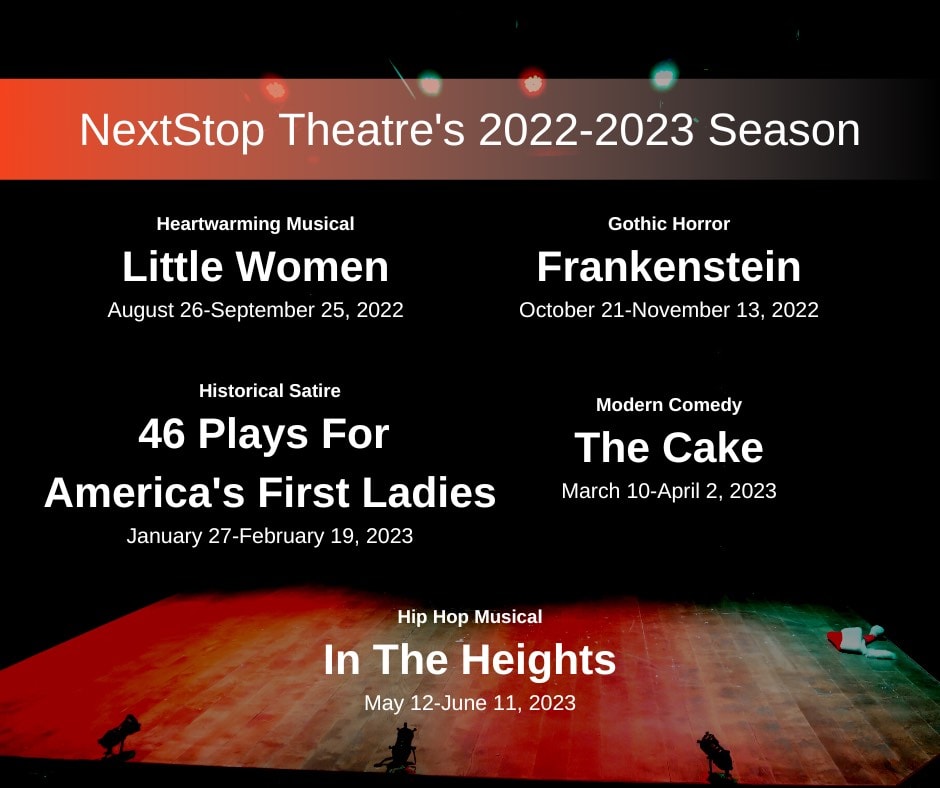 The season will kick off in August 2022 with a lush musical adaptation of the perennial classic Little Women. Based on Louisa May Alcott’s beloved novel, Little Women follows the adventures and struggles of the March sisters as they come of age during the mid-1800s. Using just two pianos and ten actors, this beloved story is guided by the impetuous Jo March as she embarks on a journey towards self-empowerment through love, loss, and loyalty in the face of great change. The musical adaptation features a book by Allan Knee, lyrics by Mindi Dickstein, and music by Jason Howland. The production will be directed by Charlotte La Nasa, one of NextStop’s recently appointed Co-Associate Artistic Directors.

Just in time for Halloween, NextStop will present a gritty new adaptation of Frankenstein by Nick Dear. When Victor Frankenstein deciphers the secret of life, he creates a childlike but grotesque creature that is seemingly the shadow of a human. Rejected by his creator, the creature is cast out into the world, where he learns both the depths of man’s cruelty and the heights of human aspirations. Increasingly desperate, the creature is determined to track down his creator and strike a terrifying deal. Based on the gothic novel by Mary Shelley about the fine line between inspiration and madness comes a bold new adaptation of one of the most famous and horrifying science fiction stories ever told. Directed by Producing Artistic Director, Evan Hoffmann.

In the new year comes the hilarious 46 Plays for America’s First Ladies! In 2018, NextStop produced the madcap comedy 45 Plays for 45 Presidents, which examined the lives and administrations of every U.S. President in history. The show quickly became an audience favorite and one of NextStop’s biggest box office hits of all time. Following the production, the show’s playwrights approached NextStop with their brand-new companion piece that offers the same hilarious treatment for the underappreciated women who have called 1600 Pennsylvania Avenue home. Devised by the Neo-Futurists (a Chicago-based theater collective), this fast-paced comedy offers a unique perspective on American history. These ladies will make you laugh, cry, and illuminate the pressures inherited with a completely made-up and often under-appreciated role. Megan Behm, the director of 45 Plays For 45 Presidents, returns to NextStop to direct this wild look behind the curtain of American history.

In March 2023, NextStop will join forces with Washington, DC’s own Prologue Theatre for an exciting co-production of the new comedy The Cake by Bekah Brunstetter. The lively, conservative Della is a talented baker in her North Carolina town, even going on TV to be a contestant on the Great American Baking Show. When Jen, who Della loves like a daughter, returns to North Carolina from New York to request that Della bake her wedding cake, she’s overjoyed. But when Jen reveals she’s marrying a woman, Della has a crisis of conscience. In equal parts hilarious and heartfelt, The Cake is a deliciously sweet story about love, acceptance, and being willing to have a change of heart. Under the direction of Aria Velz, NextStop’s second newly appointed Co-Associate Artistic Director, this ambitious co-production will be mounted first by Prologue Theatre at the Atlas Performing Arts Center in Washington, DC, before transferring to NextStop for an extended run.

Closing out the season is the original hip-hop musical In the Heights. From the creator of the international megahit Hamilton comes the show that launched Lin-Manuel Miranda’s career. From his Washington Heights bodega, Usnavi follows the nonstop rhythm of his friends and family as they navigate their hopes and dreams, loves and losses, fortunes and fates. Experience the heartbeat of a community through infectious Latin and hip-hop beats, in this life-affirming musical about the ties that bind us all together. In the Heights was originally slated for the spring of 2020 and NextStop is thrilled to finally bring the show to Herndon under the direction of Elena Velasco.

In addition to the five mainstage productions, NextStop will also see the return of their popular holiday family show in December, featuring a cast of local student performers, under the direction and support of NextStop’s professional artists. The production will be officially announced later this summer.

Tickets for the 2022–2023 season will go on sale Friday, July 29, 2022, at 9:00 am. This season will see the return of NextStop’s full-season subscription package, which guarantees patrons tickets to all five main stage productions at more than 30% off the regular ticket price. New this year, NextStop will also introduce an early bird pricing program, which will make a limited number of tickets to every single performance available at a 25% discount, if purchased at least one week prior to a production’s first performance. Season subscriptions, early bird tickets, and regular individual tickets for all productions will be available at NextStopTheatre.org.

COVID Safety: Masks and proof of vaccination are required.

Little Women (The Musical)
Book by Allan Knee, Lyrics by Mindi Dickstein, and Music by Jason Howland
Based on the novel by Louisa May Alcott
Directed by Charlotte La Nasa
August 26-September 25, 2022

The Cake (A co-production with Prologue Theatre)
By Bekah Brunstetter
Directed by Aria Velz
March 10-April 2, 2023