tempered, an original cabaret, will have plenty to rage about when it opens Friday, July 29. But you will have to catch it in one of its five performances spanning only two consecutive weekends.

I was curious about the process that went into collectively devising this work by members of the bold and highly eclectic 4615 Theatre company. I caught up with them at the Dance Loft on 14, where they had their playlist but were still manipulating the material and integrating an emotionally charged lighting design by Dean Leong.

I was immediately thrown into the mix as the warm-up was a variation on the game “hot potato.” As individuals took turns, I too was asked, “Is there anything today you feel angry and frustrated about?” Where do I start?

Roots of the show certainly had taken hold with the company’s premature closure of their last production due to the citywide pandemic shutdown. Would this be an exorcism for these artists, for all our artists, or by implication the entire community?

I can tell you what it’s not. There will not be a word of he-who-shall-not-be-named but who continues to dominate the evening news. Nor will audience members be verbally assaulted. It’s political only in the sense that anything worthy of being considered Washington-bred theater is political. It’s in the air we breathe.

Co-creators and performers Shaquille Stewart, Alani Kravitz, Jordanna Hernandez, and Jordan Friend have gone for something braver and deeper: what does each person carry in memories and even trauma? In that respect, it is a show that in its process is part therapy. (Across the hall in a Dance Loft studio, people rolled, touched, and held each other in what looked like a cross between yoga, contact improv, and group emotional healing session. It seemed to offer a certain resonance.)

Luckily the material — part monologue, part plucked music from different genres to serve the theme — is also funny in many moments. There is much original material. Despite the theme, the building of the work seemed a curiously gentle and organic process.

Founder and Artistic Director of 4615 Friend had kicked around the idea for some time, calling up his friend company member Stewart (“Shaq”). In turn, they brought in Hernandez and Kravitz. They had all worked on other company productions, so the trust was built in, and the communication was through a shorthand language with expressions such as “ramble,” ”nose gos,” and “gucci.”

I caught the four of them sitting sprawled on the floor in a circle. They were talking in random order, sometimes jumping in with suggestions and at times catching themselves talking on top of each other. Friend listened attentively and probed more with questions rather than asserting rule.  Clearly, all cast members have a sense of investment and co-ownership.

They continued to excavate artistically. How to introduce each section? What is rage and how does it affect their individual temperaments?

Built into the show are personal reflections. An opening “ramble” suggests that rage feels uncomfortable in one’s skin. Shaq offers that for him frustration builds to rage when he’s unable to control or change outcomes. Friend confesses that his rage turns inward, feeds on his own insecurities, and at times leaks out inappropriately. They all agree that there was so much to be angry about it was exhausting.

But art, as we know it and they demonstrate, is cathartic. At one point, telling the story of her mother’s celebration of her U.S. citizen day, Hernandez shows how mixed-up anger can get and how one can find oneself feeling and expressing emotional complexity on another’s behalf, aimed at “a country that may not serve her.”

Rage can also be transformed into humor and a shared high. I felt the room levitate when Friend uses his considerable guitar and song-writing skills poking fun and using proffered obsequiousness to drill out of his system a bad professional experience. Kravitz goes for what she calls “aspirational rage” in a quintessential cabaret number fueled by mordant revenge humor called “Dismemberment.” Rap and hip-hop are mixed with hard rock and David Bowie plus a ballad or two (Shaq sings “I’ve Got You Under My Skin.”)

We continue to emerge along with these singer-actors with each turn-around moment, and Hernandez reminds us that hate can also be a renewable resource.

A different guest artist will join these four on stage each night. It promises to be both provocative and entertaining.

tempered plays July 29 to August 6, 2022, presented by 4615 Theatre performing at Dance Loft on 14, 4618 14th Street NW, Washington, DC. Tickets ($25, $18 for patrons under 30) can be purchased online. A limited number of Pay-What-You-Can tickets are also available. Note that the Dance Loft is up a flight of stairs, and not wheelchair accessible at this time.

COVID Safety: All audience members must provide proof of vaccination for COVID-19 at the door and masks are required. 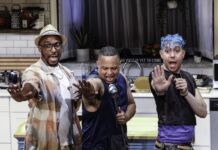